Coffee: Just an Energy Boost or a Social Atmosphere?

Coffee has been at the centre of our lives in one form or another since the 15th century. When you think about coffee, many things probably come to mind. We use it to wake us up, to give us an energy boost, or just because we like the flavor. Most people have a pattern for starting their day. People enjoy a cup of coffee on the start of a working day or drink it while studying. Drinking coffee is a relaxing and addictive daily ritual for many people. For many coffee drinkers, the popularity of coffee is a given, due to the taste of coffee and the stimulating effect of caffeine. So, why is coffee so addicting in our culture? Probably because coffee is so addicting itself. An important part of coffee is its caffeine, which is one of the most addicting substances out there. Caffeine makes the drinker more alert and gives a feeling of energy regeneration. A lot of people drink coffee when they feel tired and are in need of an energy boost. 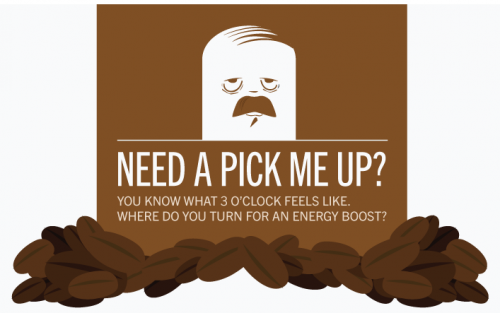 However, coffee is not only consumed for the purpose of keeping awake. Coffee is consumed at all times of the day and in many cases. Another important part of coffee, is the social aspect of it. Social factors also contribute to the fact that coffee is one of the most widely consumed beverages in the world today. People enjoy the taste and effects of caffeine, as well as associated coffee with social interaction. For instance, coffeehouses meet this need for social interaction with coffee. From the 15th century, coffeehouses have always been a meeting place for intellectuals, artists, musicians and writers to share ideas and better the community. Today coffeehouses, or cafes, function as a gathering place, or the meet-up place. It can function as a place where people could meet up with friends or enjoy a coffee within a relaxing atmosphere. With its relaxing atmosphere to slow down, a coffeehouse or a cafe is the ideal place to bring colleagues, friends, clients and dates for a casual setting that eases nerves. Coffee can be paired with good conversation. You might say that we live in a Coffee culture, which describes a social atmosphere or series of associated social behaviors that depends heavily upon coffee. Drinking coffee can gives you a chance to get to know one another, catch up on each other’s lives, or talk about different kind of things. Coffee is one of the oldest drinks to connect itself to a social activity, the social activity of drinking together. How often have you heard, “let’s discuss this over a cup of coffee”? Starbucks even built an empire through the social aspect of sitting down and discussing different kind of things over a coffee. Starbucks once wanted to refer to itself as the third place. A place for conversation and a sense of community. This third place, a place to relax, is a place between work and home. Some people look for a good tasting coffee, but they also seek a warm, comfortable seating area that will provide an overall pleasant experience. So in addition to the caffeine, another reason to drink coffee can be the social atmosphere and ambience. 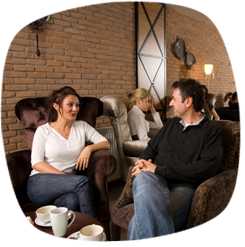 This brought me to the following questions: From which perspective is coffee discussed on a social media platform such as Twitter? Are the tweets about coffee related to an energy boost or associated with a social atmosphere and ambience?

I have analyzed tweets on Twitter in order to find out whether people drink coffee for an energy boost, or to have a relaxing moment within a social atmosphere. Therefore, I have analyzed a total sample of 554 tweets with the hashtag #coffee. To compare differences between day parts, one half of this quantity (277) was scraped on a Thursday evening and the other half on a Friday morning. In order to make a coding scheme I used 4 basic categories which I have called: Energy, Ambience, Neutral and SPAM.

The energy category is related to keywords such as caffeine, energy boost, addiction, sleep, tired.
Furthermore, the Ambience category is related to keywords such as conversation, ambience, atmosphere, coffeehouse, relaxing, cozy, and social experience. The third category, Neutral, contains tweets about drinking coffee without mentioning a particular significance or reason. Lastly, I used the category SPAM for tweets about contests, promotions et cetera. In order to get more certainty about the meaning of the tweet I also have viewed some photos which were mentioned in tweets.

Below you can see the results of the 277 #coffee tweets in the evening: 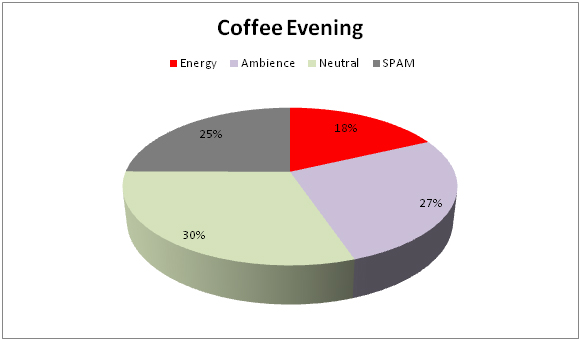 The results were satisfactory, 45% of the coffee drinkers attached a meaning to their tweet which is related to the energy or ambience category. This is composed of  18% within the category of Energy and 27% within the category of Ambience. So why do people drink coffee? On the basis of the results you can say that people drink coffee in the evening for the ambience or social factor rather than for an energy boost. The remaining half of the tweets consist of Neutral and SPAM tweets. To get an idea how I have analyzed the tweets some examples are listed below:

Some examples of Energy tweets:

“I think iv slept for max 2hours last nyt….#dying #coffee”
“attempting to pull an all nighter. We’ll see how this goes. #coffee”

Some examples of Ambience tweets:

Below you can see the results of the 277 #coffee tweets in the morning: 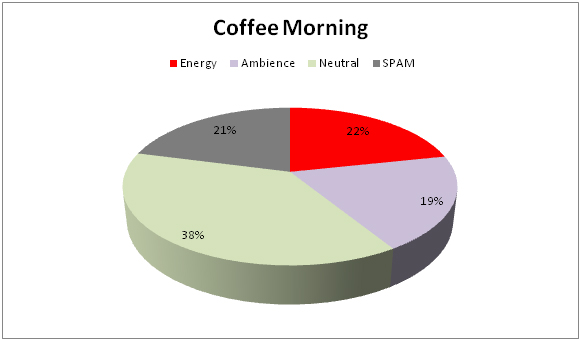 In comparison with the evening tweets, the results showed that in the morning the energy factor is higher than the ambience category. Perhaps because people drink a cup of coffee on the start of a working day. In addition, the Neutral tweets were more increased and the SPAM tweets are a little bit reduced in the morning.

To summarize, Twitter data about coffee offers a new perspective on the coffee culture. Coffee is a widely used term on the social media platform Twitter. In addition, an understanding of the meanings of contemporary coffee consumption can be gleaned from twitter data. Unfortunately I didn’t scraped the tweets on a Monday, this will probably produce different results. Perhaps there is a different relation between a Monday morning and coffee.