One particular phenomenon I’ve always been very interested in is Virtual Reality (VR); a technology created in the 90s that places the user in an artificial environment generated by a computer. The goal of VR is to create a simulation of a real or imagined environment which can either be used for education or entertainment purposes and is becoming increasingly popular now that we actually have the technology to do so. Nowadays it’s experimented with in games (such as Sony’s prototype of the VR headset), but also in movies such as The Matrix or Len Wiseman’s latest remake of Total Recall. These movies focus on a futuristic world generated by technology and truly question our abilities in distinguishing the real and the virtual through our perception. Also, as I’ve recently learned during my reading on Patrick Crogan’s book about technoculture, VR was an effective training tool during the real war to give soldiers the upper hand against their opponents.

However VR was never meant to be such an extreme extension to our real world as listed above. After its arrival, people believed VR would offer us a better way of experiencing life than our real world; a world without any of the usual limits, with no laws at all beyond those imposed by computer processing speed. ((Barlow, John Perry. ‘Being in nothingness. Virtual reality and the pioneers of cyberspace.’ Mondo 2000, nr. 2 (1990).)) There was a clear distinction between both worlds, a distinction that seemingly began to fade over the years. This is mostly recognizable in Facebook, the popular social network that allows us connect with our real friends through a virtual (cyber)space. Yet not only would VR deliver a better world, it would also offer a world with improved communication that opens up new possibilities for our social lives. ((Heilbrun, Adam. ‘A vintage virtual reality interview.’ Whole Earth Review, 1988 <http://www.jaronlanier.com/vrint.html)) This is exactly what Facebook is currently achieving and am I questioning to what extend Facebook is reaching the former expectations of VR. Does this make Facebook a remediation of VR? Before I answer this question, let me give some insight on the cyberspace VR was build on.

For a simulation to be effective, VR demands a certain space we can navigate ourselves through. These spaces are often unreal and limitless, spaces we can’t normally experience within our reality; a cyberspace. The term cyberspace was originally founded  in 1984 by the science-fiction writer William Gibson, describing it as:

“A consensual hallucination experienced daily by billions of legitimate operators [..] A graphic representation of data abstracted from the banks of every computer in the human system”.

Gibson did not realize his concept of the cyberspace, which remained purely fictional as part of his science-fiction book Neuromancer, would become so real. Since then throughout the years, the concept has been linked numerous times with our reality, making it a space we can actually reach. 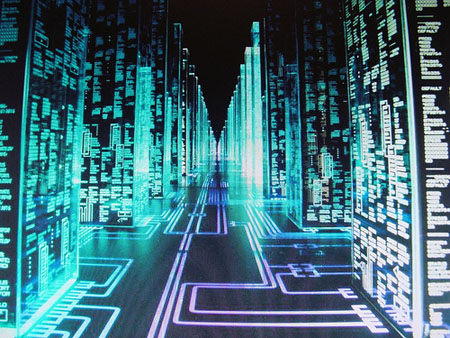 This is further addressed by John Perry Barlow in 1990 when he stated that the cyberspace will grant us new insights in how we perceive reality, something we haven’t fully established yet. ((Barlow, John Perry. ‘Being in nothingness. Virtual reality and the pioneers of cyberspace.’Mondo 2000, nr. 2 (1990).)) Jaron Lanier, who is a pioneer in the development of VR applications, seems to agree as he states that the cyberspace experience raises questions about the fixity of reality itself. A year later in 1991, the meaning of cyberspace was brought up again by Michael Benedikt, who named it a territory swarming with data and lies, with mind stuff and memories of nature, with a million voices and two million eyes. ((Briggs, Asa, Peter Burke. Social History of the Media: From Gutenberg to the Internet. Cambridge, Polity Press: 2009.)) Although Benedikt does make it sound like it’s a different world, the description shows a resemblance with something we commonly use nowadays; the internet.

These different definitions show that there was never a clear agreement what cyberspace really is. What is clear however, is that we’re seeing a shift in cyberspace from simulation to a more social and existing space, while retaining the ideology of a better world.

As I mentioned earlier, the social network of Facebook is an interesting case study that shows how the former expectations of VR are actually present in our daily lives. This is mainly due to Facebook’s connectivity that allows us to share our lives at any moment of the day. In this sense a user is always virtually online and is the notion of logging out, a feature originally present in virtual worlds to return to your daily life, simply fading away.
When Jaron Lanier gave his view on traditional broadcast media in 1988, he described it as a negative impact on our society where we no longer are able to take responsibility and end up socially isolated. ((Heilbrun, Adam. ‘A vintage virtual reality interview.’ Whole Earth Review, 1988 <http://www.jaronlanier.com/vrint.html>.)) According to Lanier, VR would be the solution to this problem. Not only is there no central point of origin of information, but more importantly, no one has any advantage over anyone else in their ability to create any particular thing within it. VR would offer a better world with improved communication and interactivity, a world that shows new possibilities for our communities and sociality. This is something we recognize in Facebook which allowed a flow of new communities and gave a positive impact on our social life. Just as VR would encourage more participation within our society, this is exactly what’s happening since the existence of Facebook. 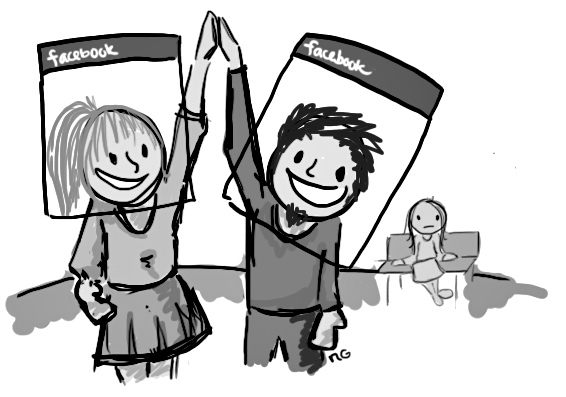 The arrival of social networks such as Facebook not only influenced our social life, but also opened up new possibilities for virtual communities. Since Facebook gives us the option to express our interests, the result was a flow of new communities consisting of people who share the same pursuits. Howard Rheingold argued how virtual communities create a big advantage over the ‘forced communities’ present in real life where people meet each other, yet still have to discover whether they share the same interests (we’ve all been there). For him virtual communities are social aggregations that emerge from the Net where people form webs of personal relationships in cyberspace. ((Rheingold, Howard. The Virtual Community: Homesteading on the Electronic Frontier. Reading, MA: Addison-Wesley Pub., 1993. Print.)) He already predicted the usefulness of virtual communities back in 1993:

Virtual communities allow the internet user to speak up, counter social isolation and participate in life. As the popularity and worldwide participation of Facebook shows, Rheingold was spot on.

So yes, it appears Facebook is in fact a remediation of VR. The possibilities Facebook opened up for our society are in line with the former expectations of VR, making it a prime example of the changing state of virtuality. The virtual cyberspace is improving the relationships we share with our offline world and allowing more participation within our society. This reach for a better world, with more social interaction and improved communication, is what VR was believed to deliver back in the 90s. This does make me wonder why this took almost 30 years to achieve. Oh well.. better late than never, right? Let’s just hope the virtual world of Facebook will not eventually dominate our actual lives as shown in the video below.