What do the web search engines “think” of the Pussy Riot case?

About Daria Koreniushkina
I graduated from Saint-Petersburg State University of Telecommunications with a degree in Public Relations in 2011. Meanwhile, I started my professional career when being a student as a project manager at the advertising agency. At that time I also had some sort of hobby: during the holidays I worked as a group leader at children camps. My experience in this sphere helped me to launch a web startup incamp.ru in May, 2011. It is the first online service for booking children camps in Russia. Working on it, I clearly understood that effective management in new media business demands not only practical skills but also deep knowledge of new media theories and research methods. That is why now I study at the University of Amsterdam at MA New Media and Digital Culture. Moreover, our company organized the first Parenting Conference in Saint-Petersburg in September, 2011. Now I understand that this project can have a significant impact on parents’ competency. In my country the problem of parents’ competency affects the upbringing and education of young generation dramatically. And I want to contribute to this problem solving. So in February we opened Parenting Academy where educational events with the leading experts of Saint-Petersburg became regular and are rather successful. However, I believe that we have to use new media more effectively to attract attention of mass audience. So my research interests lay basically in the field of e-commerce. Moreover, I am interested in new media audience behaviour and cultural differences of new media audience.

The Pussy Riot sentence has become the un 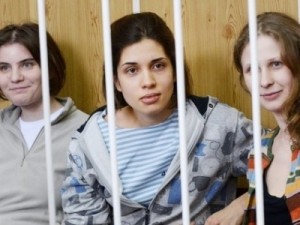 precendented event concerning the global resonance, compared to other news from Russia in the recent years. 86% of the world mass media have covered the Pussy Riot case, media monitor NewsEffector reports. Most of them are US or UK-based, followed by European broadcasters in Germany, France, Spain and the Netherlands [1]. I am Russian and there is no surprise that the case also drew my attention. Moreover, currently living in Europe I constantly come across some things that confirm the fact that Pussy Riot is a frequently discussed topic here: for example, there was a discussion about them organised by our UvA faculty.

Since there is such information overflow around this punk band, I was interested how the Internet represented the case or, to be more precise, what the top web search engines results were. Probably, if I monitored Google.nl, at least 99% of the results would be the pages containing sympathetic opinions about Pussy Riot and condemnatory points of view concerning Russian government and court system. But the situation in Russia itself is quite different. Public opinion about the case appears to be more contradictory there. The considerable share of people denounced the church performance by Pussy Riot and thought that they should be sentenced to prison, hard labor or be anathemized, Russian Public Opinion Research Center reported. Moreover, «a relative majority of Russians who kept track of the trial over Pussy Riot are confident that the final decision of the court was independent»[2]. That is why for me it was interesting to see what opinions of Pussy Riot and Russian government the web search engines of the Runet represent. For this purpose I conducted the content-analysis of the web search results on the query «Pussy Riot».

One of the traits of the Runet is that Google is still not the leading web search engine in Russia. Yandex has approximately a 60% share in the Russian search engine market, compared with Google’s 23%.[3] Obviously, these are two main web search sites in the Runet and they are based on different search algorithms. This difference led me to another interesting research question: can algorithms of web search sites have a significant influence on the information field a user gets into? So I decided to use both Google.ru and Yandex for stydying the opinions of Pussy Riot and Russian government they show and compare the results by Yandex and Google.ru.

The query «Pussy Riot» was chosen as the most representative on the topic (statistics by Yandex on the amount of queries illustrate it too). I analysed TOP-15 of the search engines results on the query because it is obvious that most users do usually not look through more than a page or two of search results.

I analysed each webpage by answering those questions:

–       Does the content of the page relate to the Pussy Riot case?

–       What type of a website is it (mass media, blog, pro-Pussy Riot resource, video platform and others)?

–       Does the content of a page contain any opinions of Pussy Riot or Russian government?

–       Does the content of a page contain positive opinions of Pussy Riot?

–       Does the content of a page contain negative opinions of Pussy Riot?

–       Does the content of a page contain both positive and negative opinions of Pussy Riot?

–       Does the content of a page contain positive opinions of Russian government?

–       Does the content of a page contain negative opinions of Russian government?

–       Does the content of a page contain both positive and negative opinions of Russian government?

The results of the content-analysis

The majority of the results were relevant to the Pussy Riot case except one webpage in Yandex results. Most of them contained opinions of Pussy Riot or Russian government (12 results by Google.ru and 13 results by Yandex).

The hypothesis 1 was partly confirmed by the outcomes of the analysis: there were only two pages that both Google.ru and Yandex showed in TOP-15 of the search results: the pro-Pussy Riot resource and the page devoted to the Pussy Riot case at the website of one of the leading Russian online newspapers.

I got the following outcomes, concerning the hypothesis 2, that confirmed it. Google.ru search results showed significantly less negative and more positive opinions of Pussy Riot than that of Yandex.

Although most of the websites showed in the search results were mass media resources (online newspapers, radio and tv), there still were some differences in the proportion of other sites types. Google.ru results contained more pro-Pussy Riot resources whereas Yandex showed some blog posts that Google.ru did not.

The tables with the links to the analysed webpages and coding results are available here: Google.ru results and Yandex results.

The research showed that Google.ru and Yandex gave different results on the query “Pussy Riot” which also contained the different proportions of the positive and negative opinions of Pussy Riot and Russian government. The opinions contained on the webpages appeared in results by Google.ru were more sympathetic of Pussy Riot and negative of Russian government. So do these results mean that Google is a more “democratic” search engine than Yandex? Of course, not. The limitations of the study do not let us make any conclusions on specific differences of Google.ru and Yandex algorithms. Moreover, the research is based on the perception of a web search engine as a black box and we should take into account permanent changes in the search results (for instance, if the content-analysis was conducted even one day later, probably, the results would be different). So the outcomes of this research emphasize some randomness of the results we get on web search sites.

This study does not aim to extrapolate any outcomes to a more extensive level since the results relate to two specific websites, one specific query and a certain moment of time. However, it can be used as a starting point for further research on how particular algorithms of web search engines influence our pictures of the world.