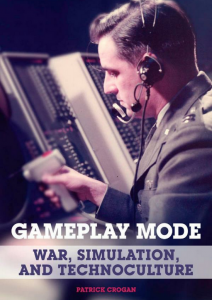 For the Wildcard Symposium 2012 (also referred to as WCS12), our group was in charge of presenting Patrick Crogan’s book “Gameplay Mode: War, Simulation, and Technoculture“. To ensure we could establish a solid representation of Crogan’s book, we decided to present the content (and thus the essence) in an 18 minute short film.

The book discusses a number of technologies which helped define our emerging technoculture, from the rise of Virtual Reality towards an inclusion of simulation gaming for military purposes. By describing the ongoing relationship between actual war and simulation games, Crogan expresses his concerns with the future in which we seek for new ways to control what is coming. The simulation we see in video games is constructing our war, just as war is actually constructing our video games. Yet this also brings forth a certain risk, something we wanted to address in our video and is tied to the conclusion.

Just as the book is doing, our video is also showing a visible contrast between the first and second part. While it may start out rather explosive, eventually we need to take into account the amount of collateral damage actual war is bringing to our surroundings, an aspect video games tend to hide. More importantly, while simulation seeks new ways to reproduce our reality to a new level, is too much realism still a good thing? The controversial mission “No Russian” from the game Modern Warfare 2 already showed how our society (and specifically the media) responds to the ongoing challenge of simulation.

In short, Gameplay Mode is a good book and we advise you all to read it. Our final project can be found below and is highly recommended to be watched in HD.