Wikipedia: everybody is an expert


In her article ‘Giving It Away: Sharing and the Future of Scholarly Communication’ Kathleen Fitzpatrick talks about the financial downsides as well as the values of open-access scholarly publishing. Due through the growth of the Internet since the early 90’s it is possible to publish scholarly articles online, so that the information and research are not only available through books but also can be published for less money. The books are more expensive because scholarly publications don’t reach a wide audience[1] . The readers are the scholars in the same circle as the scholars who wrote the book most of the time, and cannot be treated as commercial publications[2]. Therefore they are not as profitable.

Fitzpatrick explains the open access philosophy not as a free (of charge) form of publication, but more as a liberal way of publishing. The purpose of open access is to start a dialogue between the academy and the rest the world. Once there is dialogue and people feel they can be a part of this world, there’s room for understanding how important research is and this could influence the funding for the academy as well[3]. Fitzpatrick is pro- open access, although she admits that there could be problems in the financial corner if the scholarly works are available for everyone instead of being published the traditional way. She believes that by giving your knowledge away and don’t expect something in return, the (academic) world would be a much nicer place. She even compares it by the 12 step program of the Alcoholics Anonymous, which requires the recovering alcoholics to warn other people what alcohol can do to you – in other words, spread their knowledge.

Apart from the money-issue, I think there is more at stake once the academic world start to publish their articles and research so that everyone can read, respond or maybe even contribute to them. An example of what could go wrong is the online encyclopedia that everyone knows: Wikipedia. This online website exists for eleven years now, and is used for resource by millions of users worldwide. The articles on Wikipedia are provided and edited by unpaid people, and everybody can contribute, academic or not. If you look something up online, the Wikipedia page of this topic almost immediately pops up. Because lots of people know that it could be anyone who wrote the article, and even tiny details like numbers could be changed, it makes sense that scholars do not base their research on ‘Wikipedia facts’. But maybe that also has to do with that these people grew up with the new format that everybody can contribute to this webpage. If it becomes more common that articles can be edited by everyone that reads them, people could come to think of Wikipedia as a reliable source. 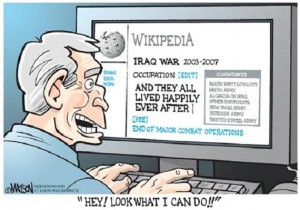 What this shows is that the quality of the research could be at stake when everybody has free access to it. Andrew Murpie states in is article ‘Ghosted publics’ that once this is the case, everybody is suddenly an expert[4]. And eventually readers follow what they consider experts, I think. Wikipedia is an example of this problem and while ‘our’ generation might not take it completely seriously, maybe the next one will.

Browsing for Wikipedia facts (I almost only founds Wikipedia pages about Wikipedia) I came across a couple of websites that had noticed that Wikipedia articles aren’t as factually accurate as they appear. Research by the Nortwestern University showed that Wikipedia pages aren’t so neutral when it comes to politics, for example. Especially older Wikipedia pages show a more Democratic oriented view on topics. This could be because a group Democrats liked to share their opinions and were the first to contribute to Wikipedia, because they were more interested in an open system, researcher Shane Greenstein thinks. Another cause for this could be that students (with faster internet connections and, of course, lots of opinions) felt the need to spread their knowledge through a open system as Wikipedia, which has led to a not so neutral online encyclopedia. 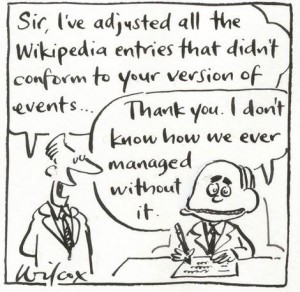 Wikipedia is an obvious example of what could be at stake in the production of open knowledge: readers relying on facts brought to us by everyone. Although this is something to think about, obviously, the open access philosophy allows everyone to think about topics they might not think about when they are unable to read about it, which can lead to more diversity in the academic world.

[1] Kathleen Fitzpatrick, ‘Giving It Away: Sharing and the Future of Scholarly Communication’, Journal of Scholarly Publishing 43.4 (2012): p. 349.