About Susan Clandillon
I am a student of New Media and Digital Culture at the University of Amsterdam with a specific interest in digital journalism, blogging and web publication. I have a B.A in European Studies from Trinity College Dublin, and my academic interests include economic sociology, gender and sexuality and history of the first World War - to name a few.

As major world events unfold before our eyes at accelerated speeds, via a host of different medias how can we process these vast quantities of information? In the digital age, we consume news round-the-clock, whether we use smart phone apps, the websites of prominent news organizations, online video content, Twitter feeds or independent blogs. In times of crisis such as the Fukushima Daiichi Nuclear disaster, we have seen how digital tools have been used by millions of global citizens to document, to report and to react to a disaster in real-time. In fact, four months after the initial accident Google had returned 73,700,000 results for the search term ‘Fukushima’ and 22, 400,000 results for the search terms ‘Fukushima and radiation’. [2] In reviewing these numbers, it is evident that people are looking for more information about the disaster – whether it be the clarification of complex radiation readings or perhaps questions about the extent of the evacuation zone. 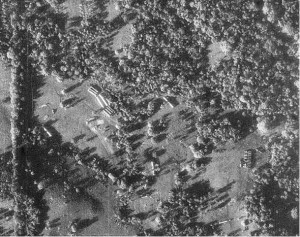 U-2 Reconnaissance Image of Missiles on Cuba – circa 1962. CIA Image in the public domain. URL: http://en.wikipedia.org/wiki/File:U2_Image_of_Cuban_Missile_Crisis.jp 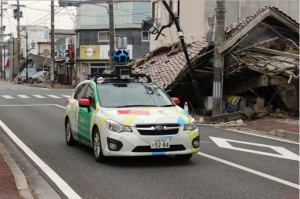 When it comes to data visualization and news reporting, satellite imaging can be an important tool in conveying information and contextualizing a crisis, and it can also be a vital base for more complex information graphics which might be layered on top to illustrate perplexing statistical data in a simpler form. In terms of the Fukushima disaster, Google Maps, Google Street View and Google Earth have been instrumental in providing quality, unemotional and transparent imaging to millions. This is certainly a striking image, when we consider the military applications of this software during the Cold War. While these satellite images were bought and sold throughout the 1990s, today they are available for free, for everybody, all of the time. Theorists like Powell, who in 1998 declared

Just as thousands subscribe to the Wall Street Journal online, anyone with a credit card will be able to go to one of the competing sites and order high-resolution images, which will be delivered via email to one’s computer. [3]

Could scarcely imagine a reality whereby access to satellite imagery would be so widely available. 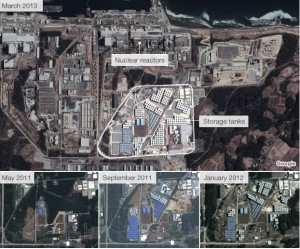 For journalists and news organizations there have been two main consequences of the proliferation of these images. Firstly, more data is now archived and searchable and this can be located in distinct spaces at distinct points in time. This has led to the development of image timelines to convey a better understanding of the profundity of a situation. In terms of reporting on Fukushima, this was demonstrated by the BBC with use of a Google satellite image timeline to highlight the build up of contaminated water tanks on site. This is an extremely effective way to outline the need for a better solution to the issue of contaminated water. Furthermore, it is illustrative devices like this one which help to provoke serious debate about possible answers all over the world – such as the current discussions on the feasibility of constructing an ‘ice wall’ around the plant. [3]

The second consequence lies in the capacity to understand the extent of an issue, and whether the problem is getting worse or better, or staying the same. Here I make choose the example of ASR’s Radioactive Seawater Impact Map, which uses Google Earth 3D imaging and TEPCO (Tokyo Electric Power Company) data to map radioactive water pollution over a 12 month period. Overall, the effect of content like this serves to better inform the viewer of real-time events through the interpretation of complex scientific data.

Along with Google Maps and Google Earth, through its Memories for the Future project (http://www.miraikioku.com/streetview/en/) Google has also made use of its Street View software to document areas within the evacuation zone that have been left uninhabitable by the disaster. With the use of panoramic 360° cameras atop of the Google Street View cars, they have been able to capture the extent of the damage following the earthquake, tsunami and nuclear disaster and document it for generations to come. The existence of this project fuels collective memory capacity and is an excellent example of harnessing the power of geolocative technology for good.

While there will always be privacy concerns regarding the use of satellite imagery, it is evident that it can be useful in generating discussion and aiding understanding at a time of mass panic. Essentially, through illustrating the world around us, we can now crowd source solutions to problems that have the potential to affect us all.

One Response to “Google Maps and Fukushima: Collective Memory and Data Visualization”
Leave a Reply