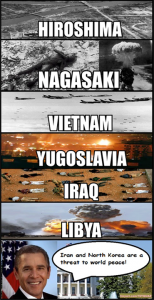 How is it that the current discussion regarding the international and geopolitical decision to ‘intervene’ in Syria is solely focused on the evidence for who used the sarin gas? Why is the use of chemical weapons a “red line” for the United States, as president Obama now notoriously stated? Isn’t the conscious use of whatever kind of military weapon against civilians an act of absolute horror which should be condemned altogether? And how is it that the only country in human history that used nuclear weapons on civilian targets (twice!), which also happens to be an aggressive hegemonistic power since WWII, gets to decide that the use of certain kind of weapons isn’t allowed?

Just to be clear: what’s happening in Syria right now is an absolute tragedy for the people in Syria, and the world in general. Almost 70 years after the founding of the United Nations that was supposed to prevent another worldwide conflict, we are on the brink of just exactly that. How is it possible that the world political power(s) in the 21st century are seriously considering yet another military ‘solution’ to problems that far outreach the use of chemical weapons, and thus start making the same mistakes as in the 20th century? Isn’t it ridiculous that the United States, which fully acknowledges funding Syrian rebels and supplying massive amounts of weapons to them, is the single country leading this intervention because of what something that Secretary of State Kerry describes as ‘moral obscene’? If the use of chemical weapons is such a moral obscenity that the US is lobbying the world over to bomb the regime which they think is responsible for it, then how is it that no other country takes the same stance against the United States? Surely the use of Agent Orange in Vietnam, white phosporus in Iraq and depleted uranium in Iraq and Libya is on an equal par, if not much more horrific and on a larger scale, with what happened in Syria?

I think the discussion surrounding Syria at the moment is way too narrow concerning all the complex (power) relations that are involved here. Of course the use of chemical weapons is by any means something that should not be happening on this world, period. But the use of bombs, grenades and missiles shouldn’t either. And when the country that spends more than half of it’s budget on ‘defense’ and by doing so still has a bigger budget than the next 13 nations COMBINED, which has a longstanding history of being involved in military conflicts all around the world (most of which out are justified by highly controversial claims) gets to decide what other countries get bombed because they use weapons of which the US doesn’t approve, then the world in general is in a very bad position. The morbid irony of this problem lies in it’s (albeit simplified) proposed solution: because this country uses weapons, we are going to use our weapons to stop them from using those weapons.

So maybe it’s time for the world to start discussing how we can end the use of weapons on such a large scale for good, and start by looking at all the parties involved that actually profit from war. Because while the general population of the world may look at the situation in Syria with absolute dismay and hope for a swift and peaceful solution, there are actually very powerful people and corporations that hope for quick intervention and escalation solely because that would see their wealth and power increase dramatically.
“War is a racket. It always has been. It is possibly the oldest, easily the most profitable, surely the most vicious. It is the only one international in scope. It is the only one in which the profits are reckoned in dollars and the losses in lives. A racket is best described, I believe, as something that is not what it seems to the majority of the people. Only a small ‘inside’ group knows what it is about. It is conducted for the benefit of the very few, at the expense of the very many. Out of war a few people make huge fortunes.”