Death of A Museum

About Lani Shadduck
I'm Lani Shadduck from the United States. After graduating from the University of Toronto with Bachelors in Political Science and Europe Studies, I worked as a writing covering technology and later as copyeditor for Media General. Working in the newspaper field sparked my interest in New Media and inspired me to currently my pursue a Masters in New Media and Digital Culture at the University of Amsterdam.

‘No flash please.’ A handsomely uniformed Van Gogh Museum attendant gently reminds a befuddled middle-aged iPhone-toting museum patron. The woman appears confused — confused at the prospect of making that pesky flash go away and equally confused at the prospect of not being able to properly photograph The Starry Night or The Potato Eaters. It’s not an easy proposition for her. This all too common spectacle of smart phone-faux-pas meets old-school-brick-and-mortar-values occurred during a recent trip I took to the Van Gogh Museum. It was a jarring reminder of how pervasive the smart phone has become in everyday life — even for a simple jaunt to the museum. 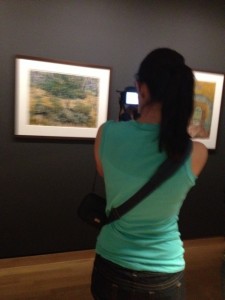 The impulse these days is to collect, track, create and feed the collective social media mind post-haste. We Facebook and Flickr and tweet with no abandon. In a smart phone enabled world, museums become mere fodder for so-called ‘smart’ collecting, feeding the info machine, filling it with pictures, pictures of pictures and so on and so forth. The smart phone has become a kind of sensory crutch. We do not see but through the lens of a lens, let alone hear or touch. Thoreau sums up the situation rather nicely, if not a little bleakly “Men have become the tools of their tools.” 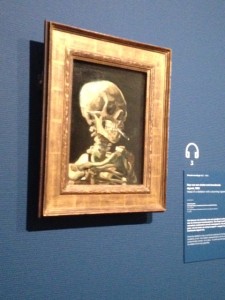 But Museums are so Pinteresting

The word museum originally stems from the Greek mouseion, meaning “seat of the Muses”.  Museums have historically served as collection-keeping institutions housing objects, curiosities and other cultural materials that are preserved in the name of history. It wasn’t until Apple gave us that holy grail of 21st century inventions –the iPhone– that society developed a rather mother and child like bond to these infant mobile technologies. The way we experienced, shared, communicated irrevocably changed.

Going to a museum used to involve long hours of staring at paintings, studying colors and brush strokes, themes. At the Van Gogh Museum, for example, we might compare the hazy, hypnotic hints of light and movement tucked into the vibrant swirls and cakey layers of oil paint so prevalent in Van Gogh’s later works to the marked darkness of his earlier replicas and drawings.  We might discover certain raw emotions conveyed with each flaky paint line and bend. The tendency today, however, is to go on marching ‘eye-phone’ in hand, ever forward, marking territories with clicks and updates. With the smart phone as our eyes we see a secondhand representation, a flat mimicking image.

Which is not to say a bad thing. It is perfection for our collective Pinterest feeds, our collective social media lives. Snap a pic and post. No hassle. Just another experience to share. The picture of a picture becomes a mastery in itself, perfectly captured — no glare, just the right framing, no editing needed.

Electronic Resonance: The Birth of the Mobile Mini Museum 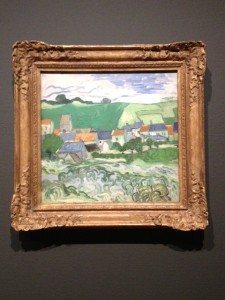 Although the compulsion to click certainly removes a tactile stratum,  life seen through smart phone-colored glasses does create a  slightly less dystopian narrative. Humans are collective creatures, forever seeking sets and meanings, building house, home and filling the empty spaces with substance. The rise of smart phone and Internet technologies allows us to  reproduce an electronic storehouse for things we want to remember: Pictures of cronuts, the new Snoop Lion album,  that last trip to Burning Man or the Rijksmuseum, that snazzy outfit we killed on Wednesday, our latest review of our latest online shopping conquest, etc.

By creating our own repository of experiences, we are constantly creating our own mini mobile museums. We in our own right are  becoming museums in miniature, curators of the (digital) lives of ourselves and others within smart phone reach. We make our own memes and exhibitions. And save for being utterly shoveled back into the nether regions of the Internet  graveyard, we will always be alive and well in the digital plane.  Moreover, while the physical institutions of museums continue to adapt to the ever-changing needs of its customers, the end result will always deal with the way the smart phone economy at large consumes images and artwork. It’s a tricky balance to perfect, but not out of reach.