About Inte Gloerich
As a New Media MA student I am interested in data visualisation, online journalism, open data and the debates about privacy and the way governments try to find ways to deal with the internet. My ultimate goal is to find a way to put my knowledge to good use in broader society, to use online media to inform, empower, enable or connect people.

We live in a time of dropping newspaper sales and traditional journalists that see their offline audiences shrink each year. Most newspapers have a well maintained online presence and try to employ the medium’s possibilities like showing video content and tweeting about recent developments. However, more often than not you’re basically reading a text that you could’ve read offline. Dutch newspaper De Volkskrant for instance allows its members to flick through a digital version of the newspaper online, actually clicking on an image of the different items in the traditional newspaper layout to see a blown up, readable version of the article. There couldn’t be a better example of just copy-pasting the old medium into the new without enthusiasm about the ways in which the new medium could entice the user.

The future of online journalism

Internationally there are a few newspapers that are really thinking about the possibilities online media have to offer. The first two that usually come to mind are The Guardian and The New York Times. Both are well known for their data visualisation departments that create beautiful and insightful interactive graphics. The Guardian even has something that they call a ‘Data Store’, where anyone can look through and take from the datasets their journalists have used.

In december of 2012 The New York Times made a bold move and got everyone talking about their new story. They created an in-depth analysis of an avalanche that took place about a year earlier that killed 3 skiers using a great deal of what the web has to offer in terms of storytelling. The New York Times wasn’t the first to make something like this, but they definitely got the new technique in the spotlight. Calling it ‘Snow Fall’ they dubbed what was soon rumoured to be the future of online journalism. 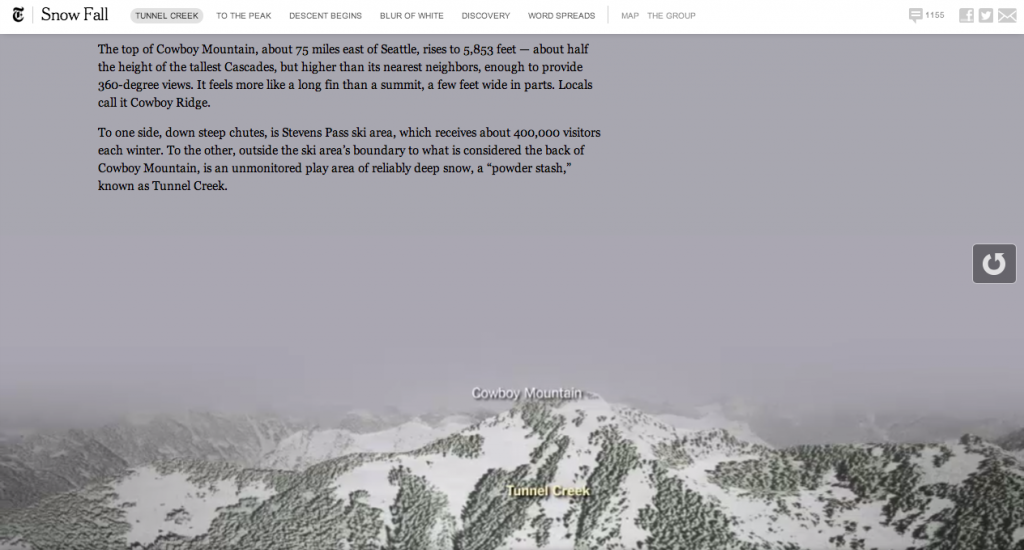 A screenshot of a part of Snow Fall (Branch, 2012). When scrolling down more the image of the mountain fills the screen and an animation instantly starts playing, giving the viewer a sense of the setting in which the avalanche took place.

Snow Fall, immersed in an avalanche

The story is told in 6 chronological tabs, or chapters, that allow the user to scroll through an immersive account of what happened. Reading the whole piece takes more time than an online text usually asks of a reader, but because of the range of different ways to engage with the story it doesn’t feel like a long concentration span. After watching videos of the actual skiing and a short documentary, getting introduced to the people in the story through a slideshow of pictures and getting dragged into the scene through visualisations of the mountain and the location of the skiers, it feels like you know the people and can imagine what they went through. Of course this can partly be attributed to the personal writing style. But more than a mere text could achieve the multi-medial approach creates a feeling of having been there.

As an added bonus there is a short documentary at the end of the story. It uses bits and pieces that have already been shown throughout the chapters and wraps it up beautifully with extra material.

Why The New York Times chose this story is unclear to me. It seems a rather small subject for a project that took a few months to complete. Perhaps that is exactly the strength of it, to drag an audience into a story they would otherwise forget about rather quickly. Other major newspapers like The Chicago Tribune and The Washington Post have since created projects like Snow Fall and The New York Times has even appointed a ‘Snowfaller in Chief’. Looking at the number of ‘snowfalls’ that have turned up in 2013 alone (Johnson, Snowfalling 2013), it looks like it is the next big thing in online journalism. But whether it is a hype or here to stay will have to show in the coming years.

Critiques of Snow Fall and an interview with contributors: