About Fernando van der Vlist
Research Master's student in Media Studies at the University of Amsterdam. 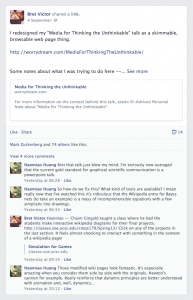 A few days ago, Bret Victor, a researcher and software engineer, announced via Facebook that he had redesigned his talk “Media for Thinking the Unthinkable“, which he delivered on April 4th of this year at the MIT Media Lab. As the title of the talk suggests, Victor posits that media are our tools for thinking about science and engineering, and as such they can be extremely powerful if designed for accordingly. More specifically, he suggests that interactive media combined with visual representations can help us comprehend the versatile complexities of systems by helping us understand how they behave. Behaviour, in this context, refers to how the changing of a variable somewhere in the system effects all other values that constitute the system. Throughout the talk, he presents us with some examples of his own work in science and engineering. In these examples, the direct manipulation (e.g. mouse sliding) of objects causes changes in values that directly influence the behaviour of all other parameters which are causally linked to that value. For me, what I find particularly interesting about all this is firstly the notion of producing thought and knowledge, rather than discovering it. And secondly, the idea of making knowledge accessible by reducing unnecessary complexity.

Richard W. Hamming, a widely respected mathematician, said that “there are wavelengths that people cannot see, there are sounds that people cannot hear, and maybe computers have thoughts that people cannot think” (1986). Media and representations, however, can help us generate these unthinkable thoughts. Media are thinking tools, and we can create them. At the same time this also means, as Nietzsche supposedly replied when asked about changes in his writing style, that “our writing equipment takes part in the forming of our thoughts” (Carr 2008). We understand things through media and representations, not just with them. Bernhard Rieder, assistant professor in new media, also addressed something similar on his blog recently. Discussing his thoughts on network analysis and visualisation (NAV), he notes that network diagrams are “specific projections or interpretations of the graph, as slices that interrogate data in particular ways” and that multiple such diagrams are required to actually produce a balanced picture (2013). On a similar note, it seems to me that we also need multiple tools or types of representations to produce pictures of these “unthinkable thoughts” with multiple dimensions.

As mentioned above, parallel to this idea of producing thought is also the ideal of making knowledge accessible to a wider audience. Extending Victor’s thoughts, accessibility here means a return to intuitive or maybe rather immediate (in the sense of the medium disappearing) forms of knowledge so that we may intuitively sense the workings of systems, rather than having to calculate their outcomes. Electrical and software engineering both tend to have high thresholds of understanding how the systems they create actually work. To a certain extent, these fields and the knowledge they produce has become inaccessible to many. This is an important issue, because many other disciplines benefit from breaking down such barriers, opening up space for more interdisciplinary understanding and collaboration. However, this is not only important for benefitting from these academic communities, but also for changing our current understanding of how research is related to society.

The so-called HackYourPhD community embodies such democratic goals of sharing knowledge outside of the expert circles, aiming to bridge gaps and show that different tools of research exist today. In an interview, Xiao Xiao, for instance, envisions a return to research as the joy of finding things out, rather than it being about publishing that paper in some respected journal. Similarly, Shimon Rura, who manages the the Open Research Exchange project at Patients Like Me, argues that patients should be involved more and drive the actual research in healthcare. Both of these interviewees are critical about the level of distance that researchers often tend to have to their actual objects of study, which remain real-world problems (see also Fortunati 2008).

So what can we do? For one, we need to think more critically about the role of publishing in the production of knowledge, so that the focus can move away from polished articles to the messy process of doing actual research. At the beginning of this year I remember another Facebook post (the interface does not allow me to look back this far), one by Lev Manovich, regarding the publishing of his article “Visualizing Vertov”. According to his post, he had not been able to convince any respected journal to publish only data visualisations. On January 11, Manovich then published the article on the Software Studies blog, adding links to a high-res photo set on Flickr. This example presents us with one of the issues at hand: the conflicts that arise between different institutions within the processes of academic research and publishing when something does not fit in it. The established publishers are well-oiled machines that will not just change their format overnight. As a second issue, the breaking down of disciplinary barriers by making research better accessible means a loss of status for those who are experts within these ‘walled fields of knowledge’. There is a benefit to keeping an area of expertise closed from public, multidisciplinary scrutiny. When no-one understands what you are doing, it is easy to convince them you are doing the right thing the right way. However much critique the interdisciplinary use of methods might receive, it will be highly fruitful research (Bod 2011, 443).

Rieder, Bernhard. “Scrutinizing a Network of Likes on Facebook (and Some Thoughts on Network Analysis and Visualization).” The Politics of Systems. 10 June 2013. Web. 6 Sep. 2013. <http://thepoliticsofsystems.net/2013/07/scrutinizing-a-network-of-likes-on-facebook-and-some-thoughts-on-network-analysis-and-visualization/>.