News consumption has somehow taken a different path since the development of RSS feed, but how is it different? And why? Let’s look at this fairly recent application, Flipboard, to answer those questions. Flipboard is a free social network aggregation, or “content network”, that presents various information contents under magazine-format, using web feed data. 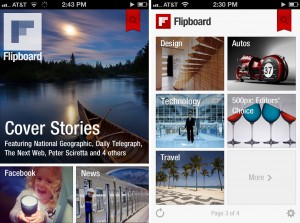 Created by Mike McCue and Evan Doll in December 2010 and since its release on Play Store in June 2012, it counts 50 million of users(March 2013). With the closure of Google Reader in July 2013, Flipboard allowed its users to import their subscription data to become one of its main replacements.

Flipboard allows users to subscribe content of their interests, to create their own magazine and “flip” their preferences and comments on their other SNS. Flipboard is like a show window that displays customizable collections of information, from general actualities to specialized magazines. By creating an account, users can browse through, search for, share, collect and save articles, photos, audio and videos. Allowing private and public magazine personalization, Flipboard is an App that tempts numerous readers with different interests and Social Networks practices.

If Flipboard distinguishes from others online news consumption practices (e.g. Google news, CNN.com)  and mobile applications (e.g. Digg, CNN) it is mainly because: 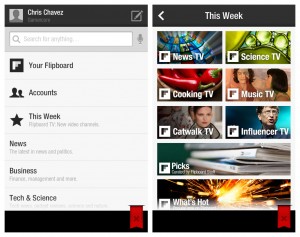 In many ways, Flipboard resembles ‘Digg’, which is another popular bookmarking/curating website and application established in 2004. They  both are leading news aggregators that recommends likable feeds to their users, which makes them more accessible than RSS feed. What makes Flipboard more interesting is that compared with Digg, Flipboard targets the more ‘personal’. It collects users’ other SNS feeds from Facebook, Tweet, or Google+ as well as news contents. Flipboard is an all-round social-network-news-aggregator for everyone that aims to position itself as personal magazine collections which covers ‘your life‘.

The New Way of Reading News, ‘Your’ News

Table: Traffic to the BBC from Facebook and Twitter(Newman et al, 2011)

It is not a new fact that news consumption has taken a new direction. ‘Reading news’ is not just reading newspapers on the table. People read news on their mobile devices at home, lying on their bed or maybe on the train, clicking the links that their friends posted. We screen the articles according to our exact interests. SNS is now becoming the major stepping stone between news readers and the news organizations. Recent study showed the user traffic to the BBC from Facebook and Twitter tripled between 2009 and 2011(Newman et al, 2011). When people share the links of news articles with their friends and followers, and the links lead them to the mainstream news organizations.

Now what Flipboard brings to the table is the customization of the news. It so smoothly conflates hard and soft news that it entertains everyone regardless of their intention of reading news; whether it is to keep updated with Syria crisis or to see what their friends have said about new iPhone. It also allows users to comprise a magazine of specific interests that they can share to the others and subscribe from others.

Flipboard has evolved from aggregating to ‘curating’ . However, it is not Flipboard that does the ‘curation’, it only enables the users to curate their own collections. This namely,  ‘social curating’ is drawing huge attention in recent years. For instance, 8tracks, a music curating application, allows users to browse and listen to other users’ collections(playlists) by tags. It also offers a great chance to create their online mix tapes. Not unlike Flipboard, it offers a venue to define, realize, and show off their taste. Now this here, is the key in the success of social curation: TASTE.

Great mixes in 8tracks get compliments

Taste is something that makes you different from others. In the information society, where information is abundant, free from discrimination and open to everyone, one does not benefit from mere access. Advantage comes from taming information. Because we potentially have roughly similar set of total information,the only way that we can create meaningful representation of ourselves in the world is to make different, distinguishable ‘combinations’ of those information. This is exactly what Flipboard enables us to do: a tasteful curation for news readers. And that is all we need.