Ideas worth spreading… Is the TED Blog worthwhile?

About Rebecca Cachia
I am a student of New Media and Digital Culture at the University of Amsterdam with a specific interest in digital journalism, blogging and web publication. I have a B.A in European Studies from Trinity College Dublin, and my academic interests include economic sociology, gender and sexuality and history of the first World War - to name a few. 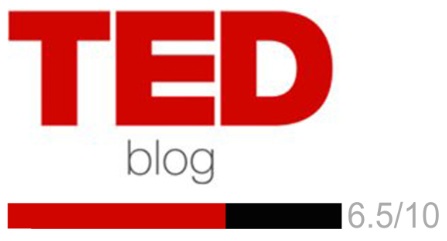 TED.com is best known for its videos of talks given by experts and up-and-comers in the fields of Technology, Education and Design. Since its inception as a global set of conferences, the TED brand has branched off into many different initiatives, including TED Talks, TED Fellows, TEDx, and the annual TED Prize. Lesser known, but running alongside these initiatives, is the TED Blog.

Who writes and who reads? 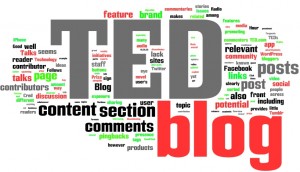 The TED Blog is collaborative and provides commentaries on TED Talks and other goings-on across the TED brand. Most contributors to the blog are TED staff writers. In fact the three contributors with the highest amount of posts are all TED staff (Haley Hoffman, Kate Torgovnic and Matthew Trost). The few guest bloggers tend to be TED Speakers or other TED members, such as TED Prize winners or TED Fellows. As a novel feature every TED user and blog contributor can get TED Cred, a grade (from 10+ to 500+), and a badge (e.g. TED staff or TED Speaker) intended to reflect the user’s contribution to the TED community and allowing the reader to understand the contributor’s place within the TED community. A user’s TED Cred can be viewed through the contributor’s TED.com profile via the blog post.

The blog is quite intuitive and visually appealing. It is divided into the different TED topics (Environment, Technology, Culture and so forth) with one ‘Featured topic’ instantly catching the eye, and it manages to highlight many posts at once on the front page without appearing too cluttered. 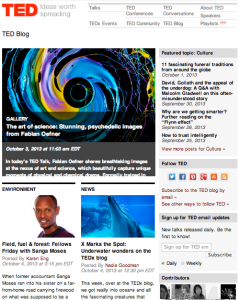 The blog makes good use of multimedia content and is well linked to other relevant websites (for further reading on the TED speakers or the topic at hand) and to other parts of the TED community (for example, through the ‘Other goodies’ section that links to, among other areas, TED Books, TEDx Tumblr, and the TED-Ed blog). Based on the familiar WordPress template, the blog is easy to navigate, well structured and the content is not overly academic, making it easily digestible for a wide audience. The contributors engage with the reader through a variety of novel and more traditional tools; SoundCloud audio clips, customized Google Maps, interview formats, photo essays, and video links to the relevant talk or audio links to the relevant TED Radio Hour. Posts clearly display the author’s name (also linking to the author’s profile) and date of publication, with social sharing buttons and related tags also being clearly visible.

While the sign up feature for the comments section under each blog post might discourage explicit content or spamming, it also seems to act as a deterrent in promoting discussion among users. There is little user interaction with the blog in the comments section, save through pingbacks or reblogs and this is a shame.

At times the TED Blog relies heavily on other aspects of the TED brand and blog posts often appear to present merely a summary of the TED Talks to the reader, rather than providing original commentary. Some posts, such as Click Your Fortune (01/08/13), come across as advertisements for the TED brand. Of course, as a ‘company’ blog this makes sense, however, this appears to run contrary to TED’s inspirational theme of Ideas worth spreading.

There are also issues with the blog’s lack of social media presence – especially on Facebook and Twitter where the other TED brands are thriving – the overall TED Facebook page is liked by 3,405,523 people (02/10/13), yet there is no page for the TED Blog at all. In addition, the iPhone app – which features content from the TED Radio Hour and content from the TED Talks – does not provide any content from, or links to, the blog. Additionally, the TED Blog does not have its own app for the iPhone or for android devices.

The TED Blog has the potential to support and complement the other TED products as well as promoting them, and it would be interesting to see more of this. Due to the blog’s lack of social media presence, it seems as though the TED Blog is more of a sideshow to the more prominent products. In fact, stumbling upon the blog as a regular TED Talks viewer seems to be the most likely path of access for potential readers. The blog has the potential to be a great tool for disseminating ideas and news but right now it is limited due to a lack of user discussion and interactivity. The blog has potential, but it has not yet gained the exposure it deserves.