About Susan Clandillon
As a New Media MA student I am interested in data visualisation, online journalism, open data and the debates about privacy and the way governments try to find ways to deal with the internet. My ultimate goal is to find a way to put my knowledge to good use in broader society, to use online media to inform, empower, enable or connect people. 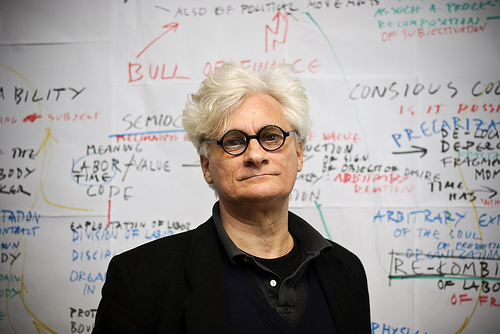 In 2011 Franco – Bifo – Berardi, an Italian media theorist and media activist, published the book After the Future with AK Press, an anarchistic publishing company. He writes about the idea of the future and the way it is linked to our view of the world. After the dot-com crash we have lost our positive belief in the progress that the future will bring. He links this concept to activism. In 1968 activism, and the economy, were at a peak. Protests were happening every day and workers enjoyed a reasonable wage for reasonable hours. However, in 1977 the punk movement arose and crushed the positive atmosphere of the ‘60s. Punks declared that there was ‘no future’ to speak of anymore. After a brief moment of utopianism with cyberculture in the ‘90s, the dot-com crash made our outlook on the future bleak again. We live in a system that is too complex and too fast for us to set to our collective advantage.

We created a podcast called Finite FM focussing on this interesting notion of the future. In an interview, Berardi talks about implications of this dystopian future for activism, the economy, and more specifically the ‘Prozac economy’. Despite its gloomy notion, the book is relatable, especially to our generation. We, often called ‘Generation Y’, are often categorized as one that is no longer fighting for anything, but is instead enjoying the future that was made for us by generations before. The podcast however – luckily – does not leave the listeners with this negative and sour taste. Berardi believes in the possibility of happiness and that indeed our society will find a way to not live in a fascist nightmare. Instead it is our responsibility to use the digital sphere as an opportunity to live political activism and conserve this possibility of happiness.

We hope you will enjoy the podcast and get inspired by Bifo’s hopeful message.