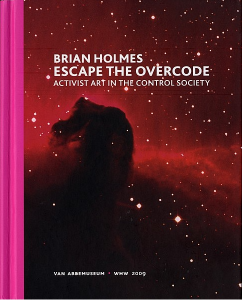 Brian Holmes wrote the book “Escape the overcode. Activist art in control society” as a part of a wider  long-term collaborative research project “Continental Drift”. The research focused on the geopolitics and geopoetics. In the book, Brian Holmes discusses and reflects on protest movements and signs of how future progressive strategies might be shaped. These protest movements are being explained through a set of  examples which extend across Latin America, Europe and Asia, where he looks at networks, artworks, films and institutions.

We looked into artistic interaction, activist art in control society in Amsterdam using the book as a background. We attended two protests in Amsterdam in order to engage with the writings of Brian Holmes in real-life settings. On 15th October 2011, Occupy Amsterdam protest, inspired by worldwide movement that originated from Occupy Wall Street,  had started in the Beursplein, Amsterdam and lasted for 6 months. Exactly 2 years later, on October 15th 2013, the protestants of Occupy Amsterdam gathered again to remind the public of the movement, to ask again if “Capitalism is still working for us?”. As a New Media Theories reading group we interviewed protest organisers and attendants, in order to link Brian Holmes’ ideas to those of Occupy Amsterdam:

The purpose of the Occupy Amsterdam protest is to influence community building to think about terms of capitalism, banks and society values. Protestants fighting against economic inequality and the course of action in the global financial sector says that “Nothing has changed” and so does Brian Holmes:

“But what we don’t have is any sustained institutional commitment, any governmental Golems who are willing to wake up from their waking dreams. And that makes it very difficult to bring together, over the middle and long term, the diverse range of people who are needed to help change the culture of the present.” (Holmes, 326).

Term “waking dreams” as a metaphor of “awareness” is the keyword of the protest and the author suggested that we are always sleeping but sometimes we need to wake up, we have to become aware. Occupy protests became a tool to stimulate people to “wake up” and “shake off” the the system. Brian Holmes was involved in such protests himself by giving a lecture named “The End of the Financial Mind” in Zuccotti Park in New York. He was also involved in discussions about Occupy Berlin or Occupy Chicago.

Another example of where Occupy Amsterdam stand for is the control of society and the surveillance, how the system controls the society. Referring to the video of Occupy Amsterdam, the woman mentioned: “The media, the big mass media controlled by the 1%”. She mentioned this because this minute minority controls the media, while the rest of the population is in the waking dreams, they are following. Holmes is also referring to Foucault’s methaphore of Panopticism and surveillance. The Panopticon creates a permanent/ continuous visibility as a form of power. Foucault proposes that not only prisons but all kind of structures in the society are working in similar fashion, for example the army, schools, hospitals and factories. Also technologies have this panopticon-like view, like cameras in public space.

With these new technologies of controlled  data Holmes defines a New form of control of the society. This data become the key to managing and controlling populations and space and it is used for identifying, ordering, standardising and categorizing life. As a result of all this data which is controlling us, the environment becomes overcoded with an optimizing algorithm, fed by data coming directly from the inhabitants. It is a kind of second sphere which is the ultimate place for control, an invisible sphere of fibre optic cables and electromagnetic waves moving around us, tracking us, scanning our neural mesh and reacting to our actions: “overcoded with algoritm, fed by data,  coming directly from you”.

As yet another engagement, we attended a Zwarte Piet protest in the middle of October. While opposition to the black caricature that accompanies Sinterklaas as a Dutch Christmas tradition has been building, the protest we attended was the biggest protest to date in The Netherlands. Zwarte Piet is Sinterklaas’s helper. People, particularly children, paint their faces black and dress up like Sinterklaas’ assistant. The tradition is also partly performative. Zwarte piet speaks poor Dutch and acts like a fool. The character was solidified in the Dutch Christmas tradition in the 1850’s through a children’s story and reflected the wealth that was flowing into the Netherlands as a result of colonialism abroad. Today, with a growing population from former Dutch colonies, the tension continues to grow. We attended the protest and interviewed a couple of participants to create the following video:

Holmes discusses the difference between “artistic practices and the management of the creative industries.” Branding is a symbol that incorporates a serious web of meaning, but mainly “the trademark image” like the Nike symbol “succeeds in capturing the attention and loyalty of consumers when it allows them to fill its empty signifier with personal meanings” (Holmes, 31)

To what extent is Zwarte Piet a brand? Defenders of the character use statements loaded with meaning they have poured into the character: tradition, childhood, innocence. Opponents look at the same image and fill it with theirs: racism, oppression, Dutch exceptionalism. Opponents we spoke to at the event explained that the performance of Zwarte Piet allows the Dutch to ridicule the character while pretending there’s nothing behind the signifier.

As a last example we took a closer look at Amsterdam’s street art scene to look for artists’ engagement with social and political issues. Our area of inquiry was Spuistraat, in the very centre of Amsterdam. The area is a well-known squat place, where all kinds of ‘free spirits’ are allowed to live and work. As a result, this lively and colorful street is constantly evolving, with new murals and graffitis being painted over their predecessors.  Under closer examination we were able to recognise many underlying messages in these works : counter-fascism, counter-capitalism, feminism, pro-environmentalism, to name a few.

More information, examples and links can be find in our presentation.