Wild Card Symposium: The Society of the Spectacle

About Cristel Kolopaking
I have a bachelors degree in Media and Culture at University of Amsterdam. Currently I am in the master program New Media and Digital Cultures.


For the Wild Card Symposium of 2013 we have made a short film about Guy Debord’s book The Society of the Spectacle (originally published in 1967). Six years after Debord wrote The Society of the Spectacle, he directed his first feature film of the same name using a combination of found footage from movies like Johnny Guitar, The Shanghai Gesture, and The Battleship Potemkin.

Drawing upon this work, we were inspired to do something similar, but with a modern spin that would both capture Debord’s initial concept, and also explain the concept of the spectacle. We wanted to show how it can be understood in contemporary society and show our own interpretation of it. 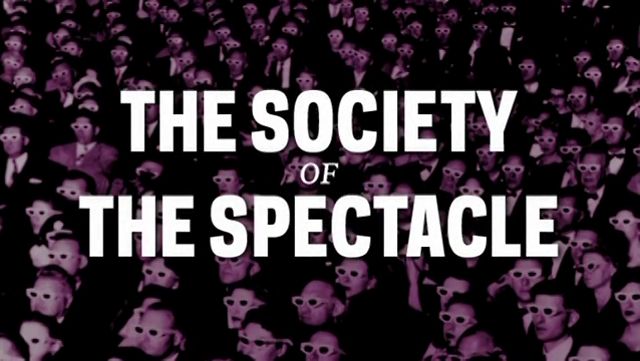 First published in France in 1967, The Society of the Spectacle  was a critique on society and the dominant ideology. Capitalism created a dominant ideology that ensured that people are no longer able to critically look at what society has become like. That is what capitalism wants.

Time is commodified; we go to work in order to earn money. After work we have little ‘free’ time and even that free time is controlled. Through images we are told that we should spend the money we earned on products, so we remain ‘satisfied’. This way we are kept in a false consciousness so that we don’t critically think  about society. We need to work in order to get enough ‘free’ time to go on a vacation. In our vacation we are encouraged to go to another place through images that have been shown to us and create a desire to go there. The spectacle controls our lives and keeps us ‘satisfied’.

The spectacle is not just visual excess, it is a circular reality into which society has entrapped itself and continuously remains entangled in. Think of the image as the ouroboros, a fantastical snake devouring its own tail; the society of the spectacle feeds off itself, its own excess and appearances.

In the end of the movie we will discuss the concept of detournement. This is a concept that the Situationist movement used to critique ideology. Debord was one of the founding members of this movement. So logically, central to the Situationists movement was the Society of the Spectacle. For them, this theory served to critique advanced capitalist society.

Detournement literally means  ‘turning around’. It is about giving a new meaning to an image. It is about pulling an image out of its context, twist it to subvert its meaning. Debord calls is ” the flexible language of anti-ideology”(65). Detournement uses the capitalist system to critique itself. In the video clip we will show how this concept is used in contemporary society.

We hope you enjoy it.

If the film doesn’t play, use this link:

Link to the presentation: