Visualizations with meta data from movies is nothing new, however those mostly depict available data sets about movies’ budgets, box office and their awards. Only recently designers and film historians with the help of media visualization techniques and tools started to use movie itself as a data source.

Lev Manovich (2013) claims that the media visualization techniques can help us to see movies in new ways adding something new to the already well-developed methods and tools in film and media studies. Such visualizations can give us new ways to perceive and study cinema. Manovich (2013) states that computational analysis of the movies combined with visualization may allow us to look “inside” the movies, to explore new aspects of cinema reveling very interesting patterns. Of course, computer can hardly identify intentions and insights into the meaning and structure of the director and editor of a movie. However, such techniques help to notice certain patterns in editing, composition, movement, color and other aspects of cinematography that might be hard to see otherwise. Computational analysis and visualization of movie data also allows to compare movies as well as to help to understand what is typical and what is unique in the given dataset and identify common patterns and similar characteristics. The kind of approach that allows us to analyze and compare the movie data is called cinemetrics.

What is Cinemetrics anyway?

Cinemetrics is the study of measuring and visualizing movie data to represent and understand the characteristics of movies (Jung et al, 2012). This approach was introduced by Australian film historian Barry Salt 40 years ago. You can find more details on that approach in Barry Salt’s article. Cinemetrics is understood to mean the statistical analysis of quantitative data, descriptive of the structure and content of ﬁlms that might be viewed as aspects of style. For practical purposes this usually means the analysis of data that describe shots in some way, for example their length or a characterization of their type.

Cinemetrics tool basically extracts statistical data from movies to reveal their inner workings. Its adoption helped add scientific rigor to film studies back when it was still earning respectability in academia. Today the Cinemetrics website, presenting the study and the software that allows it, run by Yuri Tsivian, a scholar at the University of Chicago, Daria Khitrova and Gunars Civjans, holds statistics on more than 14,000 films. The cinemetrics website is an open-access interactive website which is designed to collect, store and analyze scholarly data about films. Tsivian states, that the site’s ultimate goal is “to create an extensive multi-faceted collection of digital data related to film editing” (Tsivian, 2009).

On the website you can find cinemetrics free software that can be downloaded directly from the website. The tool basically works as a stopwatch that is able to record the times at which the user clicks the mouse or keyboard button. The user is presented with a very simple interface allowing to push buttons as shots on the movie player switch. The software must be run simultaneously with the user watching the movie. So, one movie’s dynamics data can be gathered in one viewing. There is an option to pause the process as well. Once the movie is over, some basic statistics are presented to the user, among them such as length of the movie, number of shots and average shot length.

To see more statistical information and the resulting graphs, one needs to submit the data to website’s database server to be automatically analyzed, stored and published. Submission process is built into the software, so the internet connection is required for it to work. If Internet is unavailable at the time, data is saved and can be submitted at a later time. The online version lets the user save the data manually to submit it later with the help of the database administrator.

There are scholars that use such approaches for their analyses. For example, Lev Manovich (2013) created a great project analyzing several movies of Russian director Dziga Vetrov. Another example is Tara Zepel (2009) who has analyzed different kinds of media (US political campaigns, cartoons from 30’s, contemporary motion graphics and song sequences from Bollywood).

You can find additional postings related to cinemetrics on Nick Redfern’s research blog.

There are also more artistic ways of analyzing and visualizing movie data. As a cinema enthusiast and the person that is highly interested in visualization and design I chose one example to present.

Graphic designer Friederik Brodbek chose to use different approach to cinemetrics and created a system of visual movie’s finger prints. Friederiks’s cinemetrics mostly analyses the editing structure, speech, color and movements presented in the movies. This project is Friederik’s bachelor graduation project at the Royal Academy of Arts in Den Haag, the Netherlands. For his data visualization analysis Friederik divides the movie onto several layers – such as video, audio, subtitles.  After that he analyses all the components one by one for every single scene. He identifies what has been cut and edited, how many movements are there in every chapter, and what colors were used the most. The final visualization of such analysis is very detailed and interactive.

The result of a movie’s finger print looks almost as a pie chart. The size of the pie chart depicts the duration of the movie. Segments correspond to the length of the scene. The user can look at the color palette of the whole picture, as well as with a breakdown for each part. Motion segment reflects the amount of movement in a particular scene. The user can even click on the table to see the statistics for whatever scene.

Why would one do that?

Of course the question arises for what purposes can we use cinemetrics and visualizations accompanying it? Such visualizations allow, for example, to compare the original film and its remake, several films of the same genre, or works of one director. This is interesting not only for the cinema enthusiasts but also for film scholars. Brodbeck believes that this approach also can help viewers to choose films based on formal criteria: for example, someone loves dark movies with abundant action, and others prefer bright visuals with endless talk.

Not only cinema enthusiasts and people doing film studies might benefit, but also for regular people an alternative way of looking at movies could provide an interesting new way of choosing movies based on formal criteria. For instance: “I don’t want to see the dark one with lots of motion, that colorful one with the great amount of spoken words looks much more interesting to me. (Brodbeck, 2011). 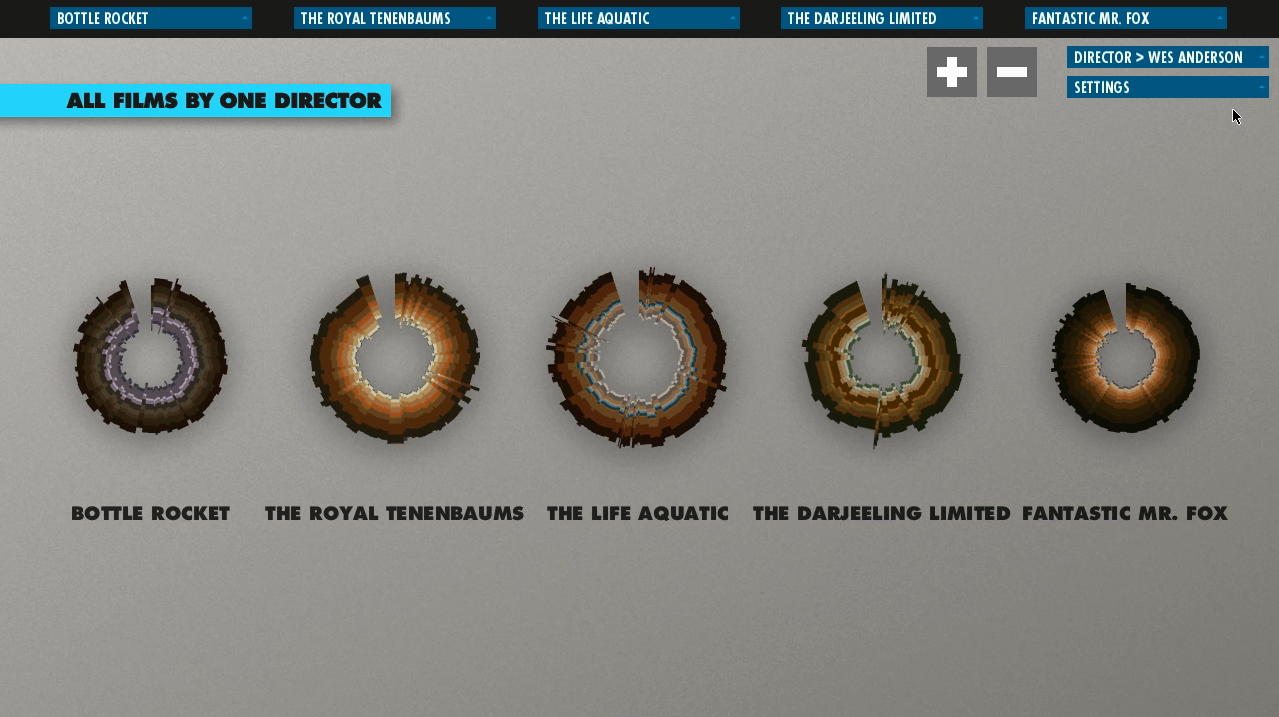 Movie as a barcode

And last but not least, there is yet another similar approach to visualize movie data. As Friederik Brodbeck (2011) suggested his visualizations could help people to choose a movie based on, for instance, prevailing color. So, before actually watching a movie one can take a look at movie’s color palette. For example, look at this picture:

On the picture above you see the movie The Matrix. This type of visualization is called moviebarcode. All cinema enthusiasts will be interested in the Moviebarcode blog, where well-known films are presented in the form of barcode images. Moviebarcode compresses entire movies into single images. The service gives instant idea of ​​which colors are presented in the movies. Take a look at famous movies’ barcodes: Bambi, Aladdin , Black Swan, Pulp Fiction.

Cinemetrics brings together statistical scientists, scholars that study film, graphic designers and just regular people. What gathers them together is that they are driven by mutual curiosity about cinemetrics as a field of study. What can numbers, structure and finally a visualization of the movie tell us about films? According to Alberto Cairo(2012) visualizations are not just tools to be seen, but to be read and scrutinized. The first goal of the visualization, he says, is “not to be beautiful just for the sake of eye appeal, but, above all, to be understandable first, and beautiful after that” (p. xix). Alberto Cairo (2012) in his Functional Art keeps reminding us that visualization strives for objectivity, precision and functionality (p.26). As you can see cinemetrics allows one not only to create visualizations that are great way to use, understand and make functional movie data; but also to make something visible and beautiful out of it that otherwise would remain unnoticed.

Cairo, A. (2012). Functional Art: An Introduction to Information Graphics and Visualization. New Riders.