[Basically, I’m just telling a biography. That there is drugs and jail involved is secondary.] 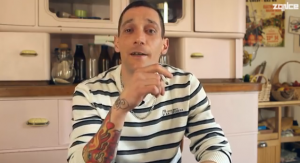 Imagine an ex-junkie sitting at a kitchen table talking about his life. It is just him and his life’s story which is full of crime, drugs, withdrawal, and relapse. When he started smoking heroin, he was just 15 year old. What followed might be viewed as the stereotypical career of a drug addict, however, there has never been the possibility to experience failure and success of a drug addict that close, intense and merciless as an uninvolved observer.

Every Wednesday, users get the chance to learn more about the life of $ick on Youtube. $ick, he calls himself, as an allegory referring to his “sick” life. He uses the German format “Shore, Stein, Papier”, a program of the Youtube Channel zqnce. What started in 2012, now resulted in over 200 short episodes, and reached over 500.000 views. This is impressive, as the videos are in German, and therefore limited to German-speaking users. The so-called vlogging (video + blogging) enables effective communication. It can be compared to an ongoing reality show (Lister, Dovey, Giddings, Grant and Kelly 226).

In all episodes $ick does not reveal anything about the present. Many questions are left open: his actual identity; his current profession; does he still take drugs or is he sober? However, this information is irrelevant to the plot of the series. $ick’s past is the key focus.

He grew up in a small town in Baden-Württemberg. After the father left the family, $ick and his mother moved to Hannover. Hannover was the heroin hub of Germany during the 1980’s. He started trying out a variety of drugs at the age of 15. Amongst others, there was the so-called “Shore”. It took him awhile to understand that “Shore” is just a slang word for heroin. At that point in time he was already addicted. In the need of money for drugs he became a criminal. He was 18 when he first went to jail. Several years passed and he felt that he was unable to break this terrible cycle of drugs, crime, and prison.

One might think the storyline sounds rather tragic. However, the way the protagonist describes the situations is mainly humorous, as though the viewer is an old friend. There is no judgment in his words. He is not trying to teach the viewer that drugs are bad, nor is he presenting himself as a victim. It was his own decision to take drugs, and now he has to deal with the consequences. The viewer feel that his drug abuse has clearly left its mark on him. The authenticity of his story is beyond doubt. The series, therefore, is entertaining but also of great educational value. However, the approach is not a new one. In the past, there have been several other formats that used a drug addict’s struggle with addiction as a main theme. 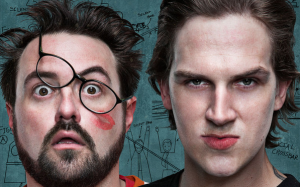 A famous example is the Jason Mewes and Kevin Smith’s Podcast series “Jay and Silent Bob Get Old” which is currently named among the top 100 podcasts in comedy on iTunes. In episode 100, Kevin explained the reason for producing the series as follows: “If you name it, you claim it…. Jason basically talked himself sober.” Mewes said in an interview in 2012: “There’s a few people out there who’ve said they’ve listened to the podcast and it’s really helped them stay sober. They’ve come to the live show and it’s helped them and inspired them to get through a time. It’s really flattering, it’s helped me, and it’s amazing.”

“Shore, Stein, Papier” is what I have long waited for. A taboo issue has become accessible to the mass market through entertainment. Using an innovative format combined with first-hand insights is the best way to reach a young target group. In my mind, drug prevention has never been as authentic and effective. Can’t wait for next Wednesday!