Is Social Media an alternative platform for the voiceless in a conflict Zone?


In the time of war, every party of the conflict has a narrative that is definitely opposite to the other, and is being used as propaganda in its favor. So what are the most effective mediums to convey accurate messages, and reveal the truth?

During the last Israeli Military operation “ Protective Edge” against the Gaza Strip in July-August, 2014 ; social media tools like face book, twitter, blogs, and Instagram have been used intensively by both sides; the Israelis and the Palestinians. This time more than ever, the battle had been intensified when it was waged online as well; Official governments, military groups, journalists, and activists worldwide took part in this on-line battle.   According to Aljazeera Satellite Channel’s  program “Inside  Story”, this time social media plays significant role being the voice of the voiceless, as  it introduced the Palestinian narrative to the whole world challenging the Israeli narrative, especially within the Western mainstream media. Hashtags were initiated by activists and supporters from both sides worldwide. The same source wrote “The hashtag #GazaUnderAttack  has been used in more than 4 million Twitter posts, compared to the nearly 200,000 for #IsraelUnderFire”.

Humanizing the news via face book pages: people are not just numbers

Additionally, social media facilitated humanizing the Palestinian discourse by providing the space and time to tell and show the stories of victims, instead of just reporting the toll number of dead and injured.  Every dead person had a full life story before, and of course could have a prospective future if stayed alive!   Poet and writer Khaled Juma, originally from Gaza, who recently moved  to the West Bank reflected that by covering the conflict in a different way on his face book page.  He wrote touchy human posts about the incidents of death, instead of showing bloody images or reporting news intensively. He wrote about the four kids of Baker’s family, who were shelled by a warship while playing soccer on the beach on July 16th, 2014. 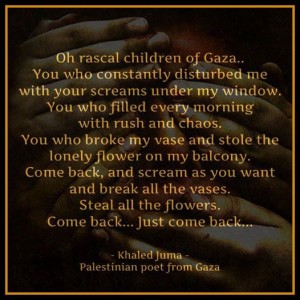 Moreover, in his article “The Unseen Aspects of War” Juma shed the light on peoples’ emotional and psychological feelings in the conflict zone despite not being killed or injured directly. He discussed in ten aspects the fear, anxiety, uncertainty, and interactions evolving among self,  time and space under shelling and attacks. He wrote “Second is the issue of terror and waiting, even in situations where there is no shelling. In war the body’s ability to gauge its surroundings, the shape of the eyes, and nerve sensitivity all change. Hearing becomes more acute, sense of smell surpasses that of dogs, and skin acclimatized, even the concept of time changes. These changes do not lie in a single factor, but hold sway over children’s fear, your personal fear, the smell of the air, spirits floating in the air, the horrible silence of mothers, and the worry of fathers who try to hide it. In war we become something else, somewhere between human and machine”.

Social media like twitter provides access to the public regardless age, place, and level of professionalism. Farah Baker 16 years old used her home location in the middle of Gaza city next to Al-Shefa hospital to tweet about all the scenes she observed from her bedroom window. She expressed her feelings as a result she became a famous tweet source for the western journalists. She wrote: “Where should we hide from this wicked world? Maybe graves are the safest, but houses in Gaza are like graves they’re always dark because of the power cut and when a house bombed it buries dead people under its stones, so even graves become unsafe! Where should we go?!”  Before the era of social media ,  information and images were reported traditionally after being filtered and edited, and sometimes censored in the editing rooms. Victims were numbers and their life stories were most likely hidden.  The ubiquity of social media in the Gaza Strip during that phase of conflict provided a golden opportunity for its users to report reality as seen on the ground, and besides, to draw their own narratives by themselves instead of others who may misrepresent it.

One Response to “Is Social Media an alternative platform for the voiceless in a conflict Zone?”
Leave a Reply