The reason Heisenberg doesn’t miss not having a smartphone

About Felix Clasbrummel
Felix Clasbrummel is a Research Student of Media Studies at the University of Amsterdam. His interests currently lie in translation/diagrammatics that means in visual, interactive and movemental expression of written thought.

Season one, Episode two. Walter White supplies his yet to be developed alter ego Heisenberg with an extra cellular phone. Contrary to his possibilities he doesn’t go for fancy, doesn’t go for state of the art, doesn’t go for compensating the greyness of the Walter White he’s about to overwrite. When beginning his schizophrenic adventure, he buys a simple, regular, functional cellphone with no whatsapp, facebook or twitter connection. With the cell phone being an untrustful partner in crime and thus subject to concern, there is a clear imperative for going with the most function-reduced cellphone possible. Yet still, it can be argued that Heisenberg will never bother not having a smartphone.

In order to further elaborate this suspicion, it makes sense to take a look at another smartphone sceptic. Being an invitee to the evening show Conan, US comedian Louis C.K. makes a rather existentialist argument (whilst generalizing a lot) against an overly dosed usage of cell phones and the reason why he will not give one to his kids (first minute can be neglected).

»Sometimes when things clear away, you’re not watching anything, you’re in your car.. and you start going “Ooh no, here it comes.. That I’m alone..” like it starts to visit on you. […] And so you’re driving, and then you go “Aaaah” [making a gesture to take out his phone and start typing] – that’s why we text and drive. And I look around at pretty much 100% of people driving and texting, and […] everybody’s murdering each other with their cars. But people are willing to risk taking a life and ruining their own, because they don’t wanna be alone for a second.«

Maybe unknowingly, Louis C.K.’s existentialist line of argument comes incredibly close to a basic thought of the theory of communication by Czech philosopher Vilém Flusser. According to him, “human communication is an artificial technique directed against the solitude unto death.” ((source of the quote, the line of thought cf. Flusser, 1997)). While at first this might appear as kind of an overstatement, it can easily be understood as means of sublimation of simple existential angst.  In Flusser’s view, it is because one is alone, that one starts to share his views via means of communication. And it is in the thus created shared space (of a we), that death, of which the experience cannot be shared, can be transcended, as written on Flusser’s gravestone: “Eu morro, tu morres, não morreremos” (“I will die, you will die, we will not die”) ((cf. Finger, 2011, pp. 85)).

But how, one might ask at this point, is this similar to Louis C.K.’s line of thought? While at first it seemed to fit (communication in order not to, as Louis C.K. sees it, be hit by the sadness of “the fact that you’re alone and it’s all for nothing”), how can he still perceive communication as something bad, if it does exactly what it’s supposed to do, that is, to protect against fear (of loneliness)?

Why now does Heisenberg not miss not having a smartphone?

To further inquire into this, we turn back to Walter White, who, already in the beginning of the series, develops a special kind of relation to his own mortality. With diagnosed lung cancer, death does not remain a future event of uncertain temporal distance, but comes up closely to him, confronting him with the fact of his soon-to-come end. When he realizes that what is going to be his remains are not at all to his content, Heisenberg comes into play. In order to rapidly amass money to secure the future of his family, Walter White forcefully realizes one of his always-been-possible forms of being, and creates Heisenberg. Throughout the series it can be seen how the two characters oscillate, and how Heisenberg comes into shape each time death is encountered and avoided. Death, as he is clearly visible as a truth, functions as the motor which brings some of Walter White’s unused potentialities into existence ((this can be fruitfully linked to the philosophy of being by Heidegger)). 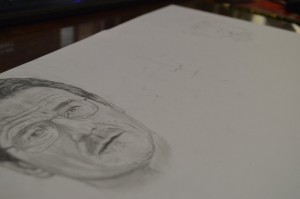 The striking difference thus is that of the consciousness or unconsciousness of ones means of facing death. Walter White doesn’t need to look for push messages on his Iphone to get a feeling of being part of the we that doesn’t die. He puts Heisenberg against death. Still, Heisenberg is an extreme, not very all-day-like example. Louis C.K. proposes a strategy that tackles the difference of conscious/unconscious that seems more applicable:

Because, as he continues to argue, the unconscious (Heidegger would even say: mindless), distracting strategy of not facing moments of sadness/loneliness/fear of something, leads one to a state, where “you just feel kind of satisfied with your product… and then you die.” (~5:35). So it might not even be too tiresome to, for the sake of Heisenbergness, sometimes “let the sadness hit you like a truck” (~4:38), or just to sit and watch. At least for Walter White there seems to be no need to text and drive.