Citizens take back the power


Journalism, Once a profession filled with bureaucracy and governed by large multinational companies, is now more and more falling into the hands of the average citizens. A change that is fueled by ever growing advancements in the field of new media.

Images such as this one are becoming more predominant as a source of visual information in our news reports, these images are often produced by amateurs with little journalistic experience.  The footage produced is therefore often out of focus, crooked or not well lit. So if the quality is a lot less appealing , what makes it so interesting for us the viewers ?

Well the answer is simple, Its the proximity ! While traditional journalists film a protest from the outside, the amateur journalist becomes part of the protest and shows the world the view from within, effectively giving us an uncensored glimpse of the action. 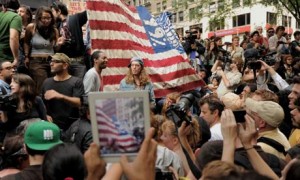 A person with an iPad Filming the Protest

All this is possible due to the rapid advancements in the field of media and technology  every man, women and child holds the same power to tell a story on  a global scale.Additionally with digital video technology is becoming cheaper and cheaper, and more and more people are indulging in this self-made citizen journalism. With easy new media publishing platform such as Demotix or News Participation the News has the ability to reach to reach the people long before the large news cooperation’s have the chance to report it.

The advantages of citizen Journalism

Probably the most important advantage of citizen journalism is the shire number of potential journalist available when an event is unfolding. Professional journalist are usually few and far, while a person with a video capable device would be right on site.

In this short clip we see citizen Journalist Hussein who explains to us what exactly he does and how he conducts his journalistic tasks. He explains that due to the violence in his country only few professional journalists venture into Syria leaving it up to the amateur citizens to capture the news footage that we receive in the west. He uploads his captured footage to a YouTube channel

Reliability and corporate use

The reliability of the content produced by private individuals often get scrutinized by its consumers, for being to subjective and twisting the facts so that they match their own opinion . 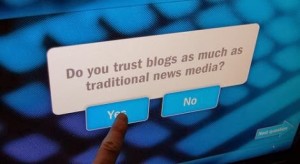 However some people argue that citizen Journalism is in fact not here to absorb as completely factual report, more over it is here to serve as a different perspective of an event. There is also often the miss conception that citizen journalism is only used in an amateur style, this is however not completely correct. In recent years the BBC has adopted the saying

“someone out there will always know more about a story than we do”   the BBC has therefore embraced citizen news-gathering as a vital resource […] They now have 23 people to handle what on an average day typically amounts to 12,000 emails and 200 photographs and videos”. (Allan and Thorsen, 2009)

“In the past 10 years the media has changed more rapidly than any large-scale global industry and the area most changed is news gathering and reporting” (TheAustralian, 2014)

Citizen Journalism has become an interlingual part of the modern Journalistic practises. Based on the numbers and statistics it does not seem as if it will be leaving any time soon. It is safe to assume that it will grow and guide our news media well into the future. It will probably never fully replace classic reporting. However with the help of new media platforms it will guide the traditional media outlets by giving average citizens the chance to control the content.