Social media marketing, crowdsourcing or the Long Tail – if somebody should tell how the Internet and associated digital media have changed economy, he/she would most likely describe their influence from a marketing perspective: digital media as means of communication or of creating digital market places.

However, media play a profound role in structuring enterprises and organizing labour. Every change of enterprise structure reflects the materiality of the medium that is used for (re-)organisation. This applies for analogue and digital media alike. Hence, as it is shown below, media and their materiality are intertwined with the development of mankinds´s productive forces.

A look in economic history is a good starting point to explain the interplay of media and business structures. In his book »The Third Industrial Revolution« Jeremy Rifkin depicts the interdependence of tayloristic, centralized enterprises and print media. The tayloristic enterprise is characterized by labour division. Work tasks are subdivided into smaller tasks until specifically trained employees can efficiently fulfil them (Encyclopædia Britannica 2014).

Rifkin points out that print media and the spreading ability to read and write amongst managers enabled them to control the divided labour in large-scale enterprises. Those managers could use print media for bookkeeping, i.e. to overview business activities and to collect data about work processes (Rifkin 2011, 46f). At the same time the material quality of printed paper didn´t allow for easy sharing of information. In order to make use of print media and guarantee an efficient flow of information organisation had to be centralized and put into a hierarchical order (Rifkin 2011, 46f).

The tayloristic structure of enterprises started to dissolve with computer network technologies. In the 1980´s enterprises started to spread their reach on a planetary scale and to outsource work (Schiller 1999, XIV). Network technologies allowed for reorganizing business in flexible, internet-based supply chain networks where each associated enterprise focuses on a set of core competencies, “the things that it does best” (Tapscott, Lowy, Ticoll 2000, 17). The images below show a comparison of a networked supply chain and a supply chain made of tayloristic, centralized enterprises. In networked supply chains specific activities (e.g. paper manufacturing) are outsourced and do not belong to the “main” enterprise (i.e. a focal firm like Coca Cola). In a conventional supply chain centralized enterprises integrate those specific activities in their organisation.

Comparison of a networked and a conventional supply chain. Source: http://www.aalhysterforklifts.com.au/index.php/about/blog-post/what_is_a_supply_chain_network

These networked enterprises reflect the material characteristics of digital media. In a decentralized network of processors every information can be translated into a binary code and be stored, sent and processed at speed never known before. The same logic applies to networked enterprises. The internet network helps them to reduce costs e. g. of information gathering, transport and negotiation and facilitates deals between business partners all over the world (Tapscott, Lowy, Ticoll 2000, 8). Network enterprises mark a major economic shift that is characterized by a compression of time and space. As Manuel Castells states the network economy »works as a unit in real-time, or in chosen time, on a planetary scale« (Castells 2010, 101f).

Cloud computing, smart devices and the work from everywhere.

Nowadays the decentralization of enterprises most obviously seems to take place on a smaller scale. Portable devices like smartphones or tablet PC´s with stronger processing power and data storage capacity are constantly spreading in the consumer market. Employees can use these devices to access work data via cloud services or enterprise servers to work from everywhere at every time. Once again this labour structure reflects the underlying media structure. Work becomes at least theoretically ubiquitary since digital devices are used in ever more daily situations and constant accessibility and connectivity. 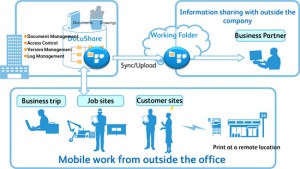 Examples of accessing work data while working from outside the office. Source: www. news.fujixerox.com

This analysis shows that media theorists can contribute to develop a critical understanding of how labour organization and labour conditions develop. Thus, they can help to find answers on questions as follows: how do new media influence the structures of enterprises and labour conditions? In which ways do business culture, labour laws and politics react to those changes? And, to cite Manuel Castells, how do power relations and dominance change in those emerging enterprises? Media have an influence on the way we work. Hence, a global understanding of media and economy can serve us to shape economy and to increase well-being for the greatest number of people possible.