On the Road Trip Mixtape

About Max Kortlander
Max Kortlander grew up in Ohio and works as a musician, writer, and editor. He is currently working on an M.A. in Media Studies from the University of Amsterdam. 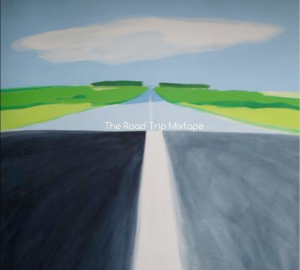 I grew up listening to albums from beginning to end. Each of my CDs had a character of its own, presented as a cohesive piece over the course of a half hour or more. Songs flowed in a narrative bound by mutual aesthetic, and played back in my head like scenes from a favorite movie.

In 1998, my parents bought a copy of Now! Vol. 1 for my brother and me, officially marking the first step in a radical change of how I would consume music. A few years later, my middle school crush gave me an unmarked silvery CD full of songs she’d downloaded for free off of the internet. I traded mp3 playlists with friends in high school, and heard Pandora online radio for the first time in college. Songs no longer came in packages of twelve by the same artist, but stood as individual pieces juxtaposed with works by other musicians.

I started working on The Road Trip Mixtape in response to this change. The aim was to create the kind of cohesive album that absorbed my childhood, yet captured the dynamic variety of today’s playlist. I wrote a series of pop songs in contrasting genres and went on the road to record each one with different guest musicians across the United States. Kickstarter supporters provided funds for my road trip. A producer and production assistant agreed to take on the first five stops with me, and all of the musicians and producers involved in the project worked for no cost, as we agreed the album would be released for free.

None of this would have been possible without the new media environment, which has been a driving force behind the album’s design, development, and implementation.  Nearly every part of the project was completed with the aid of my computer. Social media helped to facilitate a crucial network of people involved with the project. Funding, production quality, distribution and other barriers to entry were lowered. For example, the free program Garage Band proved sufficient in capturing and processing sound on a professional level. A single Facebook post led to crowd funding traffic that covered nearly half of the production expenses. Sound files were captured and sent around the world, and the final product will be available for anybody with internet access.

Of course, these advantages apply to other rising artists as well. The technologies that allowed me to create an album are widely available. Since the modes of production and distribution for aspiring musicians are of a relatively level quality, creativity and skill seem to be evermore important variables in determining the reach of one’s work. This competitive scenario, alongside the daunting possibility that my music could be heard by nearly anybody, provided me with long term motivation needed to complete the album.

The process took longer than expected. I moved five times over the course of two years, living in Ohio, Philadelphia, New York City, Nashville, and ultimately Amsterdam. I danced between jobs and apartments, working as a bank teller, then a ghost writer, and later as an editor and director of short videos. I discovered how to construct a portable recording studio that fit into a suitcase and began to meet musicians and record with them wherever I went. Somewhere along the way,  The Road Trip Mixtape became a kind of catalog of my travels, each song a diary entry made with the help of friends from where I’d been.

In the coming weeks, I face the task of fully completing the project.  A final few tracks will be mixed and mastered as I prepare for the album’s release, which again will be made possible through a network of supporters and my ability to share with them. With that being said, I am happy to present “Like a Machine” here, in what is the first public release from The Road Trip Mixtape.