The Cloud: The Cost of Digital Comfort


Last week’s Internet sensation, the leakage of compromising pictures of approximately hundred (mostly female) celebrities, has evoked different reactions that can be divided into three categories:

I do not want to contemplate on the first two categories – it is up to individuals’ conscious and personal values. The last category, though, comprises people with both aforementioned standpoints.

The original hoax was that there has been a substantial security breach into Apple’s online data storage, iCloud. Masses of Apple’s gadget users panicked out of fear that their nude selfies (and/or other more or less compromising material) were coming next to become a publically available information. This anxiety is likely to be exaggerated but before we move on to some basic security precautions, let’s see what exactly we are dealing with.

iCloud is not the only cloud out there. What the cloud really is, what it looks like and what it can do is briefly described in this short video from CNN production. Clouds help users to share photos, music, calendars, documents, games and other digital data among their friends or among multiple devices of the same user.

However, while clouds such as DropBox or OneDrive are not automatic (users have to mechanically upload their data into folders, essentially in the same way they do it in their computers), iCloud functions differently. It was specifically designed for sharing data of one or more user on multiple gadgets from Apple (iPad/iPhone/iPod Touch/MacBook). Each user has its own iCloud and each photo taken with the device’s camera, each document created on the device and each calendar appointment is automatically saved on the iCloud – unless changed in the settings. Such feature might come extremely handy with documents, contacts and calendars – but perhaps not so much with the pictures. 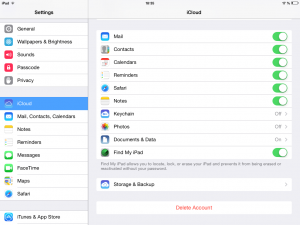 As much as clouds are convenient, iCloud is problematic because most of its users don’t really understand how it works. They don’t realize that deleting a picture from their device doesn’t delete the picture from the internet.

The recent movie Sex Tape – ironically premiered shortly before the leakage – tells a story about a married couple whose home-made sex tape (recorded on an iPad) was shared with all their family members (and other people) exactly via iCloud – without their knowledge.

In the short clip from the movie you can hear the main protagonist (Jason Segel) verbalizing what many Apple users think of nowadays: “Nobody understands the cloud! It’s a mystery.”

They guessed passwords and/or answers to their security questions. Apple’s security was compromised by how easily obtainable “forgotten password” is – requiring only birthday and answers to a number of security questions. The bright side is that while these answers are likely to be found about celebrities (as they give out so many personal interviews), chances are that hackers won’t find them about non-famous people. In case somebody finds out your mother’s maiden name (a common security question) – why not just write an answer that makes no sense? For example:

Q: What was your mother’s maiden name?
A: A grey cat riding skateboard.

(Just be sure to make a side-note of the answers on a piece of paper – those haven’t been hacked yet and you are likely to forget a nonsense like that.)

It should come naturally that your password won’t be password1234 and a two-step verification shouldn’t be new to you either. Last but not least, it is better not to even share your username with anyone.

The timing is rough for Apple, who is about to present its new gadgets this Tuesday, September 9 (this blogpost was written prior to the date).

A new, highly anticipated iOS will be introduced together with new devices (rumors have it we can expect an iPhone 6, iPad Air 2 and iWatch – a device that Apple fans look forward to ever since it was introduced by its biggest competitor on the market Samsung). Whatever the devices end up being, the new iOS promises higher integration with iCloud to support features such as Family Sharing, allowing parents to overview their children’s activities from downloading/buying apps, music, videos and calendars to photo galleries.

The question is whether the recent events will make people distrust Apple or make them work on improvement of their own digital security – which goes a long way beyond iCloud.