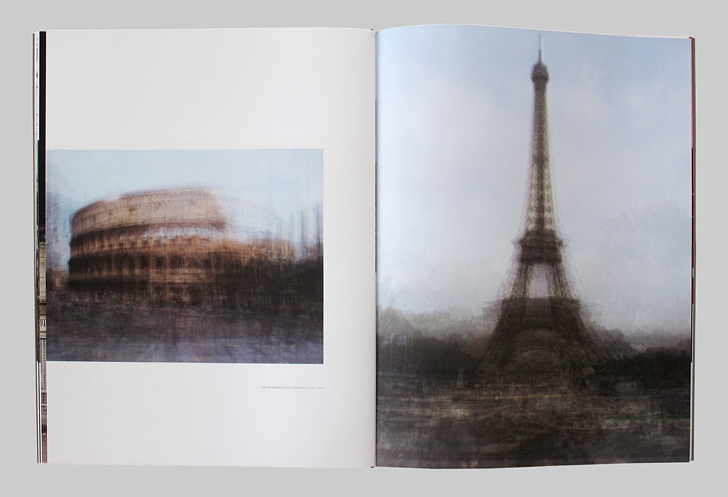 With Photo Opportunities the Swiss/French artist Corinne Vionnet puts into question the socio-cultural imagery generated by the abundance of images that circulate everyday on social networks by creating a series of works that are formed by overlapping on line pics posted by countless authors.

About the work
When traveling to Pisa with her husband, Vionnet noticed the incredible amount of people that were photographing the famous Leaning Tower; an experience that we have all encountered in any touristic destination, the difference is that she started wondering how all those images would look like. In 2005 when this project started, was very easy to do look for all those images and today even more so, since most of those images are done with digital cameras or mobile devices they can be uploaded to many different platforms, which is done in most cases, so, in order to see how they look like all she needed to do was type the touristic destination in different search engines.
As a result of this research, the artist noticed a pattern on how people were representing each city and each monument, and yes, it is probably the same image you have in your head right now if I tell you to think about the Eiffel Tower or the Statue of Liberty. After looking at thousands of them, she made a selection and combined hundreds of photos from each place establishing a focal point to line up all of the transparencies and came up with one multilayer image.
The 40 landmarks that conformed the series and were published on 2011 were carefully selected after her research on tourism statistics, travel brochures and even classical paintings, as “they too have contributed to our knowledge of landscapes and monuments” (Corinne Vionnet, 2013) .

About the imagery
It is interesting that the images created by Vionnet are entitled by the city in which the monument is located, instead of the name of the landmark that we are seeing, i.e. the one from the Coliseum is called Rome. To me this relates with the signs that we use to construct the world; this monuments were constructed to represent a specific thing that identifies an event, a place and an ideology. For example, the Eiffel Tower is a symbol of Paris, but it is also one of the most recurrent images when you talk about the entire country of France, it is also associated with love and romanticism, at the time it was built it also represented progress, and so on. But why are they so important to us? And why do we continue to represent them and share them in the same way? According to Jean Baudrillard’s theory of consumerism, we travel not because we want to enrich ourselves, but because it is part of the production-consumption cycle; even our free time is part of the a leisure built into the work structure and so if we can afford to travel it is a symbol of status which cannot be accomplished unless it is recognized by the rest of the community, so it translates into travel to a well known destination, photograph a recognizable landmark, post it on Facebook, Instagram, Twitter, or any other and get as many likes and comments as we can, because without that complete structure then the goal is not complete, for example if we are in India but we photograph a tree there is nothing that would show your friends that you were actually in India, whilst the Taj Mahal would; or if you photograph either the tree or the Taj Mahal but don’t post it or don’t get feedback then you lack the validation of your accomplishment and so on.

In Conclusion…
What Photo Opportunities brings to evidence is that the utopic idea that with the new technologies we have access to all the information, the tools, and the space and capability to express ourselves, reality is that we are not that free, in an era of endless possibilities the majority of the people still makes the same choice; in this case about the destination, the point of view, and the ways and content of communication.
Also, by not taking any new pictures herself and showing that all the other hundreds depict the exact same thing, she is taking a stand as a photographer about the so called democratization of photography, the excessive production and consumption of images that have no original content and thus contribute nothing to the discourse.

All in all, it is a well rounded work that makes you think about how much are the new technologies really contributing to our lives. The collection has been shown in many exhibitions around the world and is also accessible in a catalog. If you want to see more of the images from Photo Opportunities, as well as other artworks from Corinne Vionnet visit her website:
http://www.corinnevionnet.com/