Adobe Muse: from coding to designing


How does it work?

Adobe Muse is the new website developing program from Adobe, which makes it possible for its users to design a website just like they’d design a prototype in one of the Adobe’s other design programs. Muse uses the same markup like for instance Indesign or Illustrator, which makes it for designers who are already familiar with these programs an easy way to develop websites. When you first open Muse it gives you a blank canvas, so you can design your webpage from scratch. 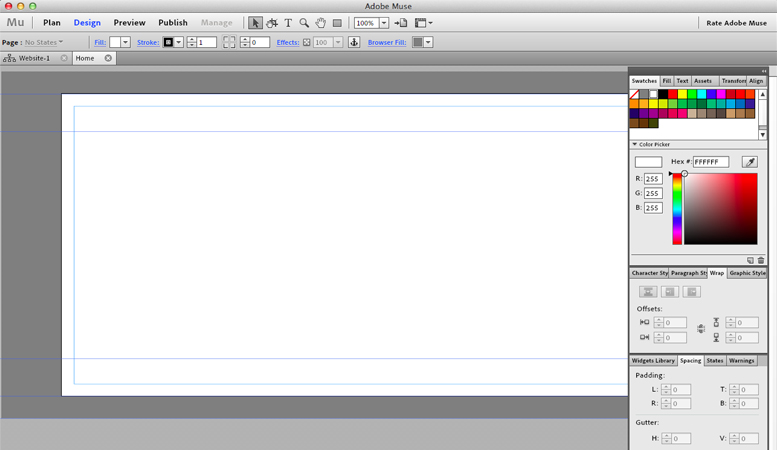 Adobe Muse works a bit like the ‘copy-paste’ mechanism. If you want an image on your page, you simply drag that picture into the position you want it on the screen. The same counts for the many ‘widgets’ Muse presents to you. These ‘widgets’ (menu bars, compositions for foto’s etc.), which you can find in the toolbar, can also be dragged and dropped onto the page. The big difference from previous webdesign programs is that the end users don’t have to learn ‘markup languages’ like HTML, CSS or Javascript to produce a website (Walker) . This makes it for a lot of people easier to develop websites. Actually, Adobe muse can be seen as an example of a bigger development involving the production of new media objects.

Part of a bigger development

There are more and more programs which allows their users to produce new media without any programming skills. Two examples of areas where designing takes over from coding are game developing and app building. A program for game developing which works the same way as Muse does, is Gamemaker. The interface of this program differs from Muse (at first sight it looks slightly more difficult) but operates according to the same principle: drag and drop. In Gamemaker you build a game by creating “rooms,” placing objects inside, and assigning events to affect those objects—all via a drag-and-drop interface (Moore).

drag and drop interface of Gamemaker

Here you can see the similarity with the blank canvas from Muse. Another area were designing replaces coding, is the app production for the Smartphone. There are many app developing programs where no programming skills are needed. One of these programs is called AppArchitect. AppArchitect allows the user to build custom iPhone and iPad apps using a simple drag-and-drop interface. When you start a new project the software asks you whether you want to make an Ipad or an Iphone app. From there, you head straight into a dashboard complete with a Screens tab, Library tab with default background and picture options, and a Properties tab where you can handle styling (Crook). You can drag and drop backgrounds, images, add text, maps, or links. What makes AppArchitect unique from other app developing programs is that you (same as Muse) can start from scratch, without the help of templates.

Create from scratch with AppArchitect

So here we can see that Muse is just a part of a broader development within the new media world. The development that programming skills are not needed anymore to create something on the computer. The same counts for other areas like music production software (Ableton and Fruity Loops) were, due to the simple interfaces, everyone can make music. This all seems like a nice development, but certain people see this as a step back in producing digital media.

Is this a good thing?

One of those people is Randy J. Hunt, creative director at Etsy.com. He won’t hire graphic designers who don’t know how to write code. For these design firms it’s a must that you can understand and producing lines of code. “its about understanding your medium” he says. “A designer that intends to create websites or make interactive products must understand the moving parts that they’re working with. In fact, they must be able to create them. Being able to manipulate means you can actually make your design decisions in the medium” (Walker). It is understandable that people will get more lazy due to this development. This means that fewer people will teach themselves how to program, which will result in a stagnation in the development of new media objects like games, apps and websites. If it’s getting this easy to produce something, why learn it the hard way? On the other hand, when the end results with these programs are getting even better than the ones required programming skills (which is already the case with Adobe Muse) nobody actually cares how it’s made. In the case of web designing it is often the designers who deliver the most effective and commercially attractive websites. This will eventually result in designers replacing programmers. The end results in the other areas discussed earlier are still far better when programming is used. But I guess it will be just a matter of time when no more programming skills are needed to create similar products.