One Word May Become Revolutionary in Media

Media as a form of communication has become ubiquitous within modern society. Platforms such as Twitter, Facebook and Youtube are often considered a part of daily-life and allow users express their own thoughts and opinions to readers, friends, followers and subscribers. Yo, a new app created by Or Arbel and Moshe Hogeg can be added to the list of sources allowing users to communicate with others, while also gaining access to information. 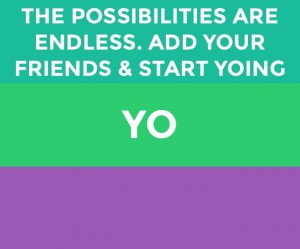 Yo, a new app, allows users to gain information and communicate with others all while using the single word “Yo”

Unlike many social media forms that give users free-reign, Yo allows readers to communicate and be communicated with using only one word: “Yo.” This may seem archaic and more like a novelty than source of information, however, this application is quickly gaining recognition as the next media platform. So why is something so simplistic as sending the word Yo becoming so widely recognized that several investors recently invested a total of $1.5 million (USD) in funding?

According to Arbel, co-creator of Yo, the app is not a form of social media at all, but rather a communication protocol.“It’s a new way to get lightweight, non-intrusive notifications. We are here to cut through the noise. We like to call it context-based messaging,” Arbel explained to Mashable in a recent interview.

This form of communication allows users to have instantaneous access to an index, where users can gain entry to various subscriptions of choice. To name a few, these subscriptions include: “NowThis” for news, “StockWatch” to alert users when personal stock has reached a target price, “RainHour” in case it will rain in the next hour in your city and even, “YoNeedThis” which according to the app offers users “cute puppy pics every now and then.” Rather than having to search for data or browse various apps, users are given the information they request within moments of it being released to the public.

Christopher Mims of the Wallstreet Journal went as far to state in his August 10, 2014 article that Yo (or a Yo-like service) is the next Twitter, if not bigger. 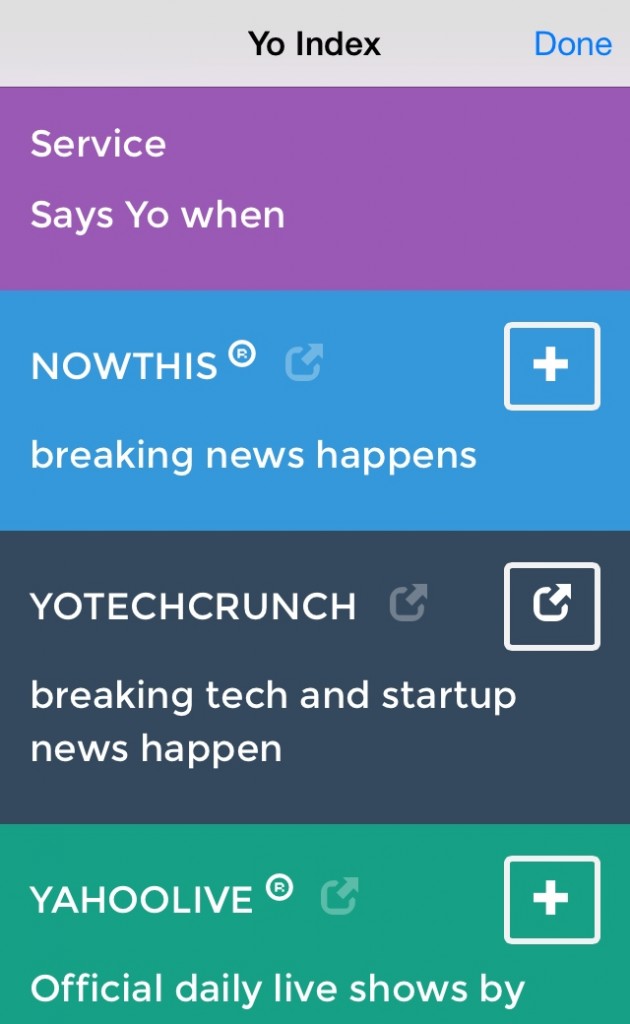 The Yo index allows readers to subscribe to various forms of alerts. Image taken directly from Yo app.

Mims explained in his article: “Here’s why Yo is important: Yo provides any person, business or Web service direct access to the notifications tray of your smartphone. Every time we glance at our phones, these are the alerts we see on our lock screens, and they also interrupt us whenever we’re doing anything else on our phones. Alerts, or so-called push notifications, are the most valuable property in the entire media universe, considering how often the average smartphone owner glances at his or her phone.”

Yo will not just stop here, it’s progression and new developments will allow its success to grow even more. “Yo’s next iteration will let users send a link along with their Yo. And a forthcoming service that lets any person connect an RSS feed to Yo means every blogger, website and media outlet on earth will be able to send push notifications to their followers, including links, whether or not they have downloaded a corresponding app,” wrote Mims.

Yo as a form of notification for emergencies has already been used in Israel, according to TIME writer Salima Koroma. “Developers in the Middle East are using the app to warn Israelis of possible attacks from rocket fire; users following the handle ‘RedAlertIsrael’ will get a ‘Yo’ at the same time the country’s sirens go off.”

Koroma stated that the application that was originally created as a joke is now being used as a survival tool. It has the ability to save lives.

Which leads people around the world to ask “Where will this app go?” It would appear that rather than disappearing into cyberspace, like so many apps do, as long as recognition can be gained by users, receiving a Yo as an alert of emerging news may become as ubiquitous as reading a tweet about the exact same news story.