Translation and Technology: Where are we heading?

The effects of new digital means of translation are starting to affect the way we interact with the world. If everyone can understand every foreign language with the use of new technology, how can those changes be understood and what will the impact be on the world we live in?

There are almost 7000 languages in the world we live in, branched out in different language families and in many different writing systems. If a person is unfamiliar with the language in a country it can be difficult to navigate and interact with their surroundings, when a person is also unfamiliar with the writing system it could be nearly impossible. New technology is really starting to affect the way people interact with language around the world. Free online language translation services have been around for more than 15 years. Realistically this technology doesn’t really have an enormous impact on how we interact with foreign languages in an actual foreign country, because a user would have to enter the text into an online translation service manually. Moreover when a person is presented with a language in a different writing system than their own, it is impossible to use such services. More recently, apps like ‘Scan&Translate’ can directly translate text from a photo. This means that if someone were to take a picture of some Russian text, the user could get an English translation of the text in the photo, even though the user might not actually even be able to read the language in question. 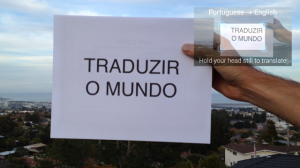 Memory is a key word when it comes to not only digital media, but for all media that have a communicative element. When books were invented they were seen an “aid to memory” (Mitchell and Hansen 17) by ‘storing’ information on paper. In this digital era, computers are “the most powerful exteriorization of memory technology in the history of media” (17). The duality of media innovations has always been that “each new medium operates by exteriorizing some function of human cognition and memory, it involves both loss and gain” (Hansen 173). Hansen uses the myth of Theuth, as recounted by Socarates to Phaedres to explain this duality. The myth of Teuth is about Teuth; the Egyptian god who invented writing. Teuth presents writing to the Egyptian king Thamus as being able to “make the people of Egypt wiser and improve their memories” (173). The king does not agree and instead claims the opposite: “If men learn this, it will implant forgetfulness in their souls; they will cease to exercise memory because they rely on that which is written” (173). Marshall McLuhan explains this duality in the sense that media can been seen as an extension of our senses, but also “amputations” of the organs they extend (173).

Even more advanced technology like direct oral speech translation (there has been some experimentation in this field) seems like something out of a science fiction film us now, but it could very well be the direction we are heading in. If we don’t have to speak the language anymore to understand someone from a completely different country, and they could understand us, this makes the need for learning foreign languages obsolete. The part of the memory that is externalised is not of that of the user themselves, but of a collective digital memory. In that case Hansen’s statement “computers are becoming even more necessary” while people “are becoming ever more contingent” (178) couldn’t be more true. We’ll have no more need for second language education, but we need new communicative technologies to make contact with others. What the precise effects will be on human brains and society is unclear. It is however proven that learning additional languages is beneficial for brain development, and recently it has also been proven to slow brain aging (Bak). So perhaps the ability to communicate in a language we do not know by accessing a collective digital memory results in us edging a step closer to becoming cyborgs, or more rather; old brained cyborgs.

Gannes, Liz. “Next Google Glass Tricks Include Translating the World From Your Eyes.” All Things D. 2013. 7 September 2014. <http://allthingsd.com/20131119/new-google-glass-apps-will-translate-the-world-from-your-eyes-and-other-tricks/>

Tags: apps, future technology, language, translation
2 Responses to “Translation and Technology: Where are we heading?”
Leave a Reply