Smartwatches: a step closer towards the Cyborg? 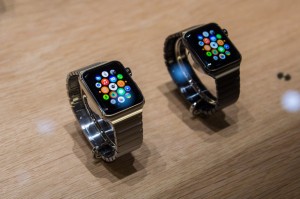 On the 9th of September, 2014, Apple organised their iPhone Event, in which they not only introduced the iPhone 6 and iPhone 6 plus, but also the Apple Watch. This is Apple’s version of the latest trend in smart devices: smartwachtes. Apple isn’t the first manufacturer to release a smartwatch, since there are numerous Android-smartwatches that have also recently been released, by manufacturers like Asus, Motorola, Samsung and LG. The idea of the smartwatch was initiated by Pebble, which funded and released their first smartwatch via the Kickstarter crowdfunding platform in 2013. But with Apple being in the race, it nearly always means it’s becoming serious.

To start with, the smartwatch is essentially an extension of the smartphone. It connects to a smartphone via Bluetooth or NFC, which enables it to perform certain actions that are actually happening on the smartphone, like showing messages or the wheather forecast. The other way around, smartwatches can also be used to let a smartphone perform certain actions, like making calls and shooting pictures. In this sense, the smartwatch can also be seen as a remote control for the smartphone. Smartwatches also bring with them some new features. For example, they can be equipped with different sensors, like heart rate monitors, thermometers and GPS.

Humans and the smartwatch

As human beings, we keep interacting with technology more and more. The smartphone definitely revolutionary changed the way we organize our lives. But the smartwatch is now about to take this change a step further. The technology literally becomes part of our body. Not only is it attached to our body, it is actually connected to it by, for example, measuring our heart rate. And, because the smartwatch will be always online, it connects our physical self to the online world more than ever.

Are we a step closer to Haraway’s Cyborg?

One of the terms that, at least to me, almost immediately popped up when reading up on the features of Apple’s new watch, is Donna Haraway’s ‘cyborg’. In her essay “A Cyborg Manifesto: Science, Technology and Socialist-feminism in the Late Twentieth Century” (1991), Haraway proposes a new way to look at the human race. She wants to dismiss the Oedipal theory that creates a strong distinction between the two different genders, stating that all humans are cyborgs, humans that are inextricably connected to technology. While Haraway’s cyborg is rather abstract and symbolic, the smartwatch brings the idea terrifyingly close. Until now, the cyborg theory was applicable to the fact that we engage with technology in a sense that we are working with it every day, by sitting behind a pc or by having a smartphone in our pocket. But the smartwatch really makes us one with technology, and in a way blurres the line between us as human beings, and technology. Are we really that much involved with technology that we have lost (a part of) our humanity?

In the most recent cover story of Time Magazine, called “Never Offline“, Lev Grossman and Matt Vela argue that the smartwatch  – and for them, the Apple Watch in particular – is indeed a step closer towards technology being really one with our body:

It’s intoxicating and also a bit disconcerting to have this much functionality perching on your wrist, like one of Cinderella’s helpful bluebirds. Wearables get inside your personal bubble. We’re used to technology being safely Other, but the Apple Watch wants to snuggle up and become part of your Self. This is technology, after being repeatedly repulsed, finally establishing a new beachhead. To wear a device as powerful as the Apple Watch makes you ever so slightly posthuman.

To me, it’s that last term that might even be more terrifying than that of the cyborg: post-human. While this is a difficult term to interpret, and it certainly doesn’t have one, unequivocal meaning, the simple parsing of the word is what expresses it’s powerful message. We are in an era where we go beyond ourselves, beyond being humans.

So, to answer the title question: Yes, I think smartwatches take us one step further towards the cyborg that Haraway proposed as a new view on the human race and society. Maybe even more than the smartphone did, because the fact that the smartwatch is really attached and connected to our bodies makes the term ‘cyborg’ more real than ever.