The more you play, the more aggressive you become! Is this true?

Is a game for Android that was uploaded to the Google Play store on 29 July, 2014 and has already been downloaded between 500 and 1000 times. allowing players attack Gaza while it’s still being bombarded in real life. 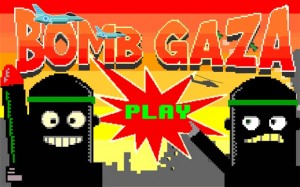 In Bomb Gaza, the Israeli Palestinian conflict is imitated as follows:

“You play as the Israeli Air Force, tapping a touch screen to pour red-nosed bombs into a 2D multilevel landscape filled with cartoonist people wearing white robes and clutching children — meant to signify civilians — as well as others draped in black, clutching rifles, touting greenish headbands and grinning maniacally. The goal is to hit those black-garbed militants — presumably members of Palestinian militant group Hamas — while avoiding the white-clad civilians”. 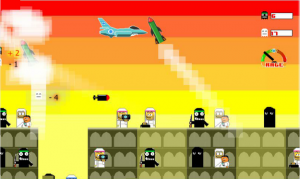 No specific instructions on how to play the game. However it is almost impracticable to play without accidentally killing civilians. 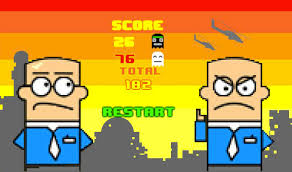 Timing was very crucial to release such game while in real life hundreds of civilians mostly children and women were killed and injured in Gaza. Consequently rage comments and tweets were posted on several social media platforms condemning the release of such game.

One Google user said:”To think that you can turn genocide, murder and ethnic cleansing into a game is absolutely disgusting, a second user added: My beloved brothers and sisters are dying in Gaza and some stupid ignoramus decides to make a game like this”.

While another one tweeted on his account saying: “This is just disgusting and vile. How are Google allowing this to stay on for almost a week!!”

Accordingly Google removed the controversial Bomb Gaza game from its Play Store after the negative reviews.

“Google spokesperson commented: we remove apps from Google Play that violate our policies as Play’s policies prohibit depictions of gratuitous violence and content advocating against groups of people based on their race or ethnic origin, religion”.

The developer of the Game commented about his motivation for making it by saying it was the truth. Within the above mentioned Google policy, is not quite understandable why to upload such game with such violent content at that specific time in the first place, wasn’t it checked or reviewed before uploaded?

What impact such video games leave on their audience/gamers in general?

Video games in general are developed for fun and relief, and supposedly to keep the players away from stress and boredom, but is this the case here? Most scholarly literature discusses the violent video games from a negative impact.
Meta-analysis reveals that:

Another study claimed that besides the game content  the blood presence makes a difference.

Such studies ad more responsibility and warning for games developers when they do their designs.However another scholarly work asserts

Conflict and war are the feeding material for contemporary gaming. When real wars are partly covered with virtual ones, users may lose the ability to distinguish between both, resulting in desensitization towards violence where blood becomes nothing to mean, and people’s lives or death are with no difference. Perhaps that is the cause of increased crimes like school shooting, homicide, domestic violence, and snipers shootings.