About Sebastian Bertoli
Hi! I am a student at the University Of Amsterdam taking a course in New Media and Digital Cultures. My interests lie in education, digital literacy, e-learning and MOOCs.

While this week’s tech-press has devoted much space to the launch of yet another better, bigger and more amazing set of consumer electronics, it was a seemingly unexciting object with the looks of a humble notebook-charger passing by the name of “Cyborg Unplug” that caught my attention. 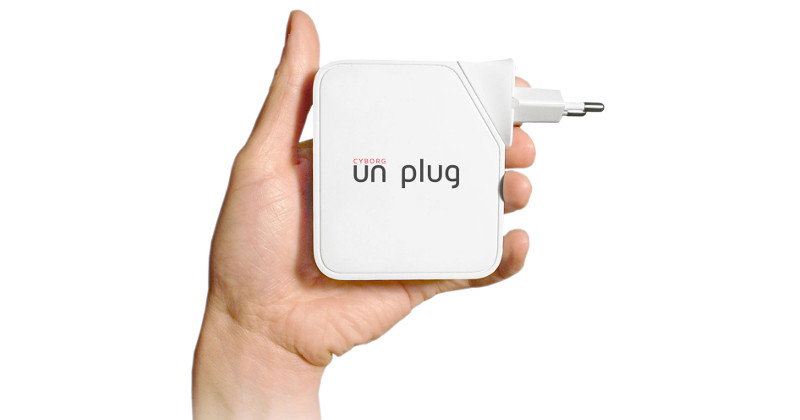 Cyborg Unplug is a 100-dollar “anti wireless-surveillance system” developed by Berlin based artist and Critical Engineer Julian Oliver that is able to effectively prevent potentially privacy-invading devices such as Google Glass [1] to connect to (closeby) Wi-Fi networks. It functions by first scanning the surrounding networks for ‘blacklisted’ wireless devices and once such device has been discovered to invoke a “disconnect-command”. In case you are wondering who would need such device here is a practical application: 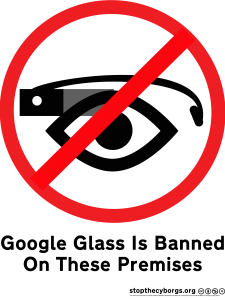 Photo by stopthecyborgs.org CC by

You own a café or nightclub were customers are unlikely to appreciate being watched by  “Google Explorers”  that are potentially able to live stream imagery over the Internet. So as a precautionary measure you could use Cyborg Unplug to effectively prevent Google Glass wearers to connect to the Internet. But what about offline recording? – you might ask – and here you hit the nail on the head. In fact, Google Glass wearers would still be able to record video footage on their devices making Cyborg Unplug only a half-hearted anti surveillance solution.

However my interest in Cyber Unplug goes beyond its practical application: drawing on the notion that our material culture is loaded with cultural meaning (Pearce) I am interested in the questions it poses concerning our current and future socio-technical development. Let me start with the name – Cyborg Unplug. This begs the question of first how we define a cyborg, a term which was coined by Manfred Clynes in the 1960s (Clynes and Kline), and second whether Google Glass wearers can be conceptualized as such.

The Oxford English dictionary defines a cyborg as a person whose physical abilities are extended through mechanical elements built into the body. In contrast Andy Clark, argued that we are cyborgs not just in the physical sense but also in the “more profound” sense of being “reasoning systems whose minds and selves are spread across biological brain and non biological circuitry” (Clark 3). Donna Haraway goes even so far to argue that in fact we are all cyborgs (In: Bell et al. 44). For the purpose of this blog-post I would postulate that technologies such as Google Glass which both in its physical appearance and usage scenario forge a closer bond between humans and technology, are sustaining a process of “cyborgization” (Wittes and Chong). This in turn poses a series of challenges in terms of access to technology, discrimination and privacy of which the latter two bring us to Cyborg Unplug’s purpose: that of “unplugging”.

Much debate concerning Google Glass has revolved around the issue of privacy. Considering the technical abilities of such devices as well as the vulnerabilities that can be exploited by hackers[2] such concerns are certainly justified. While Cyborg Unplug puts these important debates in the spotlight the solution it proposes is rather backward thinking: what the “unplugging approach” essentially does is to discriminate against the use of technology that is deemed as privacy invading. As long it affects a relatively small number of Google Glass beta-testers’ ability to “explore” casinos or night clubs it is a rather mundane issue. However if such technologies are to become as ubiquitous as the smartphone, and as such integral parts of ourselves, then more forward-thinking approaches will be needed.

Perhaps a starting point would be a reconceptualization of the rather vague concept of privacy (Solove) that goes beyond a private/public dichotomy to a more context-aware definition (Nissenbaum) as well as more context-aware and privacy-ensuring technological  implementations that will build on such conceptualizations. For instance such implementations would be able to control the privacy settings and sensor capabilities of a device based on the situation/space the user is in (Templeman, Kapadia, et al.).

Julian Oliver predicts that Cyborg Unplug is only the beginning of a future market of surveillance counter measures. However I hope that such devices will, rather then becoming more popular, spark more critical discussions on issues relating to to Google Glass and alike. With a possible increasing “cyborgization” of society, which will make us both “agents of and subject to surveillance” (Wittes and Chong 18) such issues should be addressed at the root of the cause through revisited concepts of privacy, technical implementations that will follow a privacy by design approach (Cavoukian) and appropriate regulatory frameworks.

[1] Other devices include popular wearable ‘spy’ cameras, microphones, Dropcams as well as small drones and copters.

Pearce, Susan M. On Collecting: An Investigation Into Collecting in the European Tradition. Routledge, 1999. Print.