About Safia Akkus
Safia Akkus is a New Media & Digital Culture student with an interest in safety and security in the digital age.

Privacy, surveillance, technology and design: in the workshop ‘Warzone Wearables’ clothes and accessories are being adapted in order to escape the all-seeing eye of your physical and social surroundings. 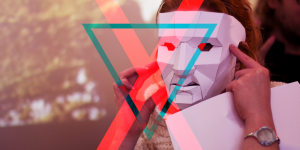 As part of their year theme ‘Sousveillance – Eyes Everywhere’, new media center SETUP organised a summer school program called ‘Sousveillance’. This program runs from August 16th to October 2nd and has the upcoming workshop Warzone Wearables‘ on September 20th, where participants can adapt clothes and accessories into real-life protection against surveillance camera’s, scanners and even smartphones of friends.

Inspired by designer Adam Harvey’s countersurveilling clothing line Stealth Wear, in the workshop clothes are being re-modified in order to deceive, distract or mislead technology and arm yourself against an environment that registers every move. This can come in handy, since “data can be easily mined, tracked and identified”, as Harvey says in the YouTube-video below (00:00 – 02:41).

This identification and processing of data which Harvey speaks of, is getting more common. Internet giant Baidu just came up with the Chinese version of Google Glass, called Baidu Eye. Like ‘Glass’, Baidu Eye faces the same safety and privacy problems, such as the possibility of hackers accessing personal data and revealing personal information. Another Chinese firm has planned a facial recognition payment application with near-perfect accuracy, which enables users to authorise their online transactions just by showing a picture of themselves. Both pairs of glasses are already able to identify faces and pin them to a specific location. This means that not only public, but also private devices can invade privacy.

Safety over privacy
There might be one big benefit of privacy invasion: safety. Striking a balance between privacy and safety is hard though and has somehow shifted to some sort of trade-off, where privacy became less important. Privacy as a concept is a conundrum (Fletcher, Griffiths & Kutar 2001, 2). People are willing to give up almost everything in order to feel safe. This is also what sociologist Katja Franko Aas says: “in a world obsessed with all kinds of danger, […] safety comes to dominate the public discourse and the way we live our lives”, (2007, 111). In her book Globalization & Crime she speaks of the trend to securitization. Feeling safe and secure are the greatest goods. But to what extent are we willing to give up control over our personal data and thus privacy?

Everyone is a spy
At this moment everybody knows and accepts to a certain level the amount of personal data that is being saved by the government. The big scare came with Edward Snowden in 2013, who gave the world a wake-up call with his warning about personal data collection. This is still a interesting discussion. What is the purpose of these collections? A possibility might be the manipulation this data (Michael & Michael 2009, 713), resulting in ‘tracking’, ‘nudging’ or even following the outcomes of computing algorithms, unknowingly steering life choices.

However, a new discussion is on the rise. In the current situation it is not only Big Brother that is watching, even more so you are being watched by the Little Sisters. The small devices that are ubiquitous. We are living in a so-called sousveillance society where everybody is able to follow everybody (Ali & Mann 2013, 243). The streets are filled with smart objects, able to see and register every move (Petroulakis, Askoxylakis & Tryfonas 2012, 5681). Also plenty of data is being obtained through for instance social media. This implicates that privacy is not only a personal choice anymore, others have a say in it as well. That could mean that digital selfdefense, like the new Cyborg Unplug, might not be enough. Does this mean that we at risk of being controlled by technology instead of control technology itself (Michael & Michael 2009, 719)? Surely protection is not only able through other electronic devices, but design might also be useful (Pagallo 2012, 340). That is were the clothing line of Harvey comes in again, arguing that fashion has a potential of securing privacy. New questions come to mind: does wearing them make somebody suspicious, as if you have something to hide? Of can it be abused by criminals?

So even when you think you have nothing to hide and are aware of the life in the panopticon, anybody can make a honest mistake. Giving up privacy as a trade-off for safety means giving up personal data, which can be used (now or in the future) for unknown purposes. Anti-drone clothing, like in ‘Warzone Wearables’ can be seen as a form of countersurveillance. Or maybe just as a must-have item for the fashionably paranoid.

Ali, M.A. & Mann, S. “The inevitability of the transition from a surveillance-society to a   veillance-society: Moral and economic grounding for sousveillance.” Technology and Society (2013): 244-254.