Introducing Toosheh: The new mesh network application that tries to tackle the problem of information controls inside Iran

About Mahsa Alimardani
Mahsa Alimardani is an Iranian-Canadian Internet researcher. Her focus is on the intersection of technology and human rights, especially as it pertains to freedom of expression and access to information inside Iran. She holds a Honours Bachelor in Political Science from the University of Toronto, and is completing her Masters degree in New Media and Digital Culture at the University of Amsterdam. 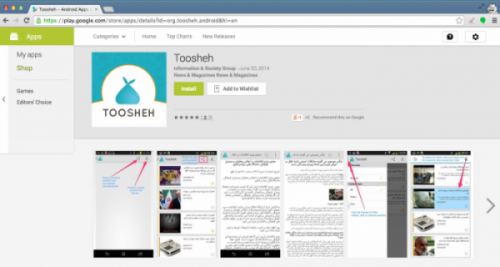 The Toosheh application can be uploaded from the Google Play store.

Branded as a little blue bundle, the new android application developed by the Information Sciences Institute at the University of Southern California is a slight play on words. Toosheh which in Persian means baggage, endeavours to connect Iranian’s through what has popularly become known as mesh networks to content and communication with other users without an Internet connection. The double entendre in the name of course comes from the french word touché, which in fencing terms is the acknowledgement of a hit of one’s opponent. Indeed Toosheh is meant to be a hit by Iranian users against the government of Iran’s information controls, as users are able to both bypass the nation’s filtering system, and the government’s control over Internet speeds. This is a natural progression from the developers previous, and still existing Persian language project Balatarin, which was a crucial tool during the 2009 Green Movement in sharing content about the opposition movement.

Before we get into the work of Toosheh, it’s good to reference John Gilmore‘s statement,”the Net interprets censorship as damage and routes around it.”(2) Within the past four years many incidences have emerged to significantly put this ethos under threat, starting in 2009 with the Iranian government’s response to the 2009 protests against the fraudulent Presidential elections, slowing down Internet traffic in fear communications technologies could help mobilize protesters against the state. In 2011, when the Egyptian government cut off Internet access to an entire nation after a few phone calls to the nation’s Internet service providers, an alarm bell really started to ring about the dependence of people on state controlled Internet routes. (3) This was further exasperated by other instances of information controls during the Tunisian revolution, and the long established practice of China’s “great firewall”, now coupled with the power Western democracies hold over Internet service providers, wherein corporate entities such as Comcast maintain growing control over Internet traffic (also known as the Net Neutrality debate). (4)

In an age of top-down control over the Internet, it is a surprise that mesh networks have not become ubiquitous. Regular Internet connections rely on ISPs to control the nodes of information, but in a mesh network, the user is the data relay, not the machines owned by the ISP, and as such users becomes their own Internet service providers. When used anywhere in the world, no central authority could censor, or contain the speeds within mesh networks. Academics of the Berkman Centre were amongst those who first started to  argue these networks were essential tools, especially in times of crisis (the Boston Marathon bombings of 2013 were a good example of their deployment). (5) Within the past year, FireChat has emerged as a key player in the field, especially within Iraq’s region’s of Internet  blackouts. A report by the Citizen Lab has indicated that the application operates unencrypted, and is thus susceptible to surveillance, as well as infiltration from various kinds of users, as accounts and names are used and created by anyone. (6) It is clear that from 2012 (Berkman) to the present (Citizen Lab), the sentiments of mesh networks from liberation technologies to potential surveillance danger have changed the discourse. 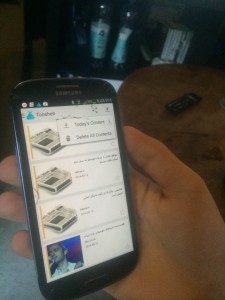 Toosheh users can upload content from regular Internet connections, or through their computer, then share with other users via bluetooth pairing. Photo taken by author.

How Toosheh enters the fray is yet to be known. Testing on the encryption have not been done, so matters of privacy cannot be addressed within this blogpost. Toosheh is at its infancy, and developers are still fine tuning its structure before it is officially launched. Currently, Toosheh’s focus is not on the personal communication of chats, but rather content. The goal is to allow digital content, which is censored by the Iranian government, to reach the users of the app through a bluetooth network. The application thus requires one user to connect to the Internet to download the  content, after which the user can connect to other users through bluetooth, and share. The most utility will be found in the ability to stream video content once it has been shared over bluetooth, taking away user reliance from government controlled ISPs that purposefully offer slow Internet speeds.

What this app lacks, and what the developers have explained will be part of the next development phase, are the abilities to exchange user generated content. In the event that the Internet is throttled again in Iran, what will be crucial will be the ability for users to upload, transfer, and communicate information with one another without dependence on the state. Currently Toosheh does only one of these things. 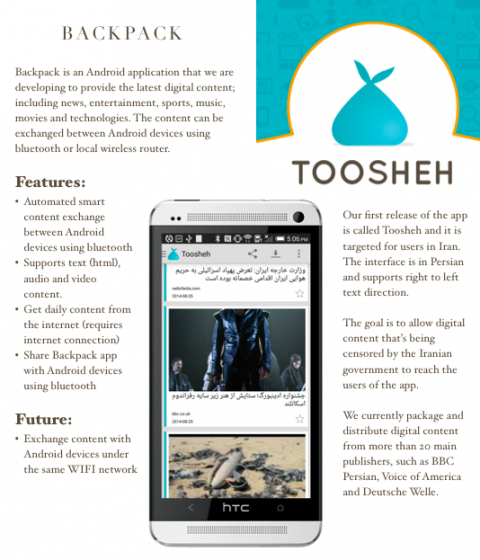 Promotional brochure explaining the application’s features, and future development. Image used with permission from the developers.

(2) Elmer-Dewitt, Philip, “First Nation in Cyberspace: Twenty million strong and adding a million new users a month, the Internet is suddenly the place to be.” TIME International – Dec. 6, 1993, No.49 Accessed September 13, 2014. <http://www.chemie.fu-berlin.de/outerspace/internet-article.html>

(4) See more on the Net Neutrality debate in the United States in the Electronic Frontier Foundation (EFF). “An Open Internet Is Essential to a Free Internet: Why Net Neutrality Should Matter To Everyone.” Electronic Frontier Foundation. N.p., n.d. Web. 14 Sept. 2014. <https://www.eff.org/deeplinks/2014/09/open-internet-essential-free-internet-why-net-neutrality-should-matter-everyone>>