In the past decades, videogame developers have been adding realism and immersion (as well as blood spattered details) to their games. With the advent of powerful graphical processors and high-definition screens, the images have become sharper and the line between reality and realism has become blurred.

Much of this development has to do with realistic use of (human) motion. Using motion capture techniques, body movements (walking, running etc.) have become far more convincing, but even facial expressions are now captured by sticking small dots on actors’ faces and have their expressions analysed and converted to facial expressions of their virtual alter ego.

Another way of immersing the gamer into a virtual world has been to design appealing, hyperrealistic surroundings: green pastures where you can almost smell the grass, grisly mountains, cosy villages and impressive cloud formations, all too beautiful to be true. One would almost be tempted to grab a camera and take pictures of the scenery, just to post them to Facebook or Instagram. A number of games have included to option to pause the game and take screenshots, to be shared with online friends. Numerous blogs are filled with – at times breathtaking – pictures of non-existing worlds. This option has been taken a step further by developers of the Playstation 4 version of the game ‘The Last of Us – Remastered’, where a dedicated ‘Photo Mode’ was added.

Not only does this mode allow the gamer to pause and take a screenshot; it offers the possibility to create ‘actual’ photographs of the scenery using a virtual camera, not unlike Instagram or VSCO cam, so including the option to change the virtual lense’s aperture – adding depth of field – , adding filters and effects. As Kovalovs, one of the developers, mentions:

Graphical fidelity and social integration on game consoles have converged at a time when it’s never been easier or more popular to share photography online. (The Verge, 2014)

According to the creators of the Photo Mode, the technology that enables this mode is not necessarily new, but the online ecosystem has changed dramatically in the past few years. The willingness or even eagerness to share experiences and especially pictures and video has reached new levels: Twitter and Facebook, as well as blogs and other platforms are heavily used to share gamer’s achievements. In fact, Twitch – a website that offers nothing but streaming video of other people’s gameplay – was recently acquired by Amazon for nearly a billion dollars (wired.com 2014) in an attempt to dominate the television screen, where most of the videogame action takes place (with most other screens dominated by Apple and Google). In July 2014, Twitch had 55 million unique visitors watching 15 billion minutes of gameplay (businesswire.com 2014).

Why are gamers so keen on sharing? If games are designed to be immersive (for a wealth of reasons), and to have the gamers identify or even unify with the game’s protagonist, one could consider the shared pictures ‘first person selfies’. Selfies as a form of ‘personal photography’ has been extensively researched. Four social reasons for sharing personal photos are: personal and group memory, relationship creating and maintenance, self-representation and self-expression (Van House et al. 2005). The emphasis of videogame photo sharing seems to lie with the last three of these reasons, and memory is a fading aspect of more and more ephemeral and intangible personal photography. As Van House concludes:

Personal photographs may be becoming more public and transitory, less private and durable, more effective as objects of communication than of memory.

If ‘gameplay selfies’ are effective objects of communications, what exactly do they communicate? In the case of ‘The Last of Us’, the pictures contain severe violence and very graphic images.  The award winning war photographer Ashley Gilbertson, who spent months as an embedded photojournalist in Iraq and other war zones, was asked by Time Magazine to ’embed’ himself in ‘The Last of Us’ and shoot a series of pictures using the Photo Mode. Gilbertson, who witnessed enough violence to develop Post Traumatic Stress Syndrome, found the game to be too violent and gruesome:

I initially played the game at home. But after a short time playing it, I noticed I was having very strong reactions in regards to my role as the protagonist: I hated it. When I covered real war, I did so with a camera, not a gun. At home, I’d play for 30 minutes before noticing I had knots in my stomach, that my vision blurred, and then eventually, that I had simply crashed out. (Time.com, 2014)

If an experienced war photographer crashes out playing the game, and millions of gamers around the world can’t wait to cheerfully share their ‘zombie selfies’, what does this say about self-representation? 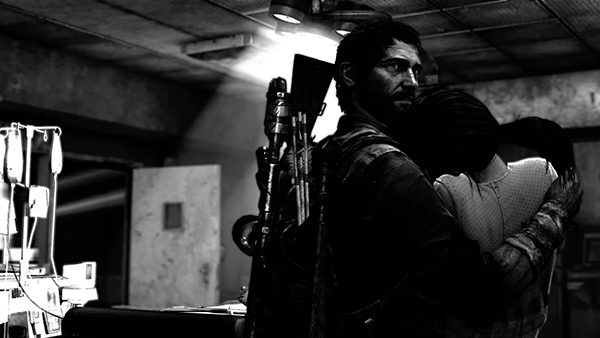