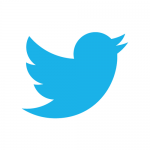 Last week I received an e-mail from Twitter with the heading ‘We’ve updated our Privacy Policy and terms of Service.’ That’s always interesting news. What was even more interesting was the easily announced new feature Twitter is testing: a “Buy” button that allows users to purchase a product.

The button let users shop from select merchants and artists directly from the social network. For a small percentage of U.S. users, some Tweets from Twitter test partners will feature a “Buy” button, letting you buy directly from the Tweet (Twitter Blog).  Mashable wrote immediately about the new feature of Twitter. Reporter Seth Fiegerman states that the button represents Twitter’s biggest step into ecommerce to date and is the result of many months of development and tests.

How the “Buy” button exactly works? In Twitters test, a purchase can be completed in just a few taps. After tapping the “Buy” button, you will get additional product details and be prompted to enter your shipping and payment information. Once that’s entered and confirmed, your order information is sent to the merchant for delivery (Twitter Blog). Twitter explicitly mentions the security and safety of the information of you purchases: “Your payment and shipping information is encrypted and safely stored after your first transaction, so you can easily buy on Twitter in the future without having to re-enter all of your information.” They’re also mentioning that you can always and at any time remove your entire payment information if you want to.

Nathan Hubbard, the former Ticketmaster CEO who joined Twitter a year ago as its first head of commerce, told Mashable something interesting in an interview. “In some capacity, we’ve been working on it since day one that I’ve been here. I think you’ve seen us do a lot very quietly over the past year that informs where we are today.” That means that Twitter is interested in inventing and improving their ways of making money for already a long time . That isn’t good or bad of course, but it somehow questions the idea behind the “social” service Twitter offers. 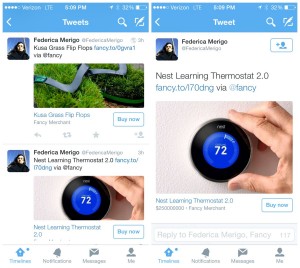 The question now arises if the social medium Twitter, an online platform to meet and share with others, will be still the same if commerce enters the arena. Shouldn’t social media, as the word describes, have something to do with being “social” and not with commerce and buying things like in a webshop?

In her study Gina Masullo Chen says that Twitter gratifies users need to connect with others (757). If this is the reason why users are sharing their information and experiences with others on Twitter, what will happen if the whole platform transforms into something slightly different? Suddenly this platform has the extra aim to sell things to users instead of only being a platform where the user decide what it wants to share, do and  see.

Verdegem and van der Graaf are confirming a transition in social media from a logic of sociability to one of commerce (1).  They explicitly give data a key role in this transition, since the data of users becomes valuable for all kind of third parties, but the buy button is in my opinion pointing to the same transition. As they state: “Implicit in this transition are the issues of surveillance and transparency, as what started out as collective, user-centred social media platforms have become profit-driven organizations required to create commercial returns for investors” (1).

In an other article for Mashable, Fiegerman writes that the bigger goal for the social networks sites Facebook and Twitter, according to analysts he spoke with, may simply be to use commerce as a way to boost engagement among users by giving them more reason to stay on site as well as provide an additional selling point to advertisers.

The fact that Twitter is now experimenting with the development of this “Buy” button shows how this  social media platform is commercializing its service. This is also what Nick Summers in an article for The Next Web writes: “It’s a huge move for Twitter and one that emphasizes its drive to effectively monetize its service.” However, Seth Fiegerman undermines this a bit by stating that Facebook and Twitter won’t become a shopping network like for example Amazon, because users won’t necessarily have a “mindset to make an impulse buy.”

Therefore, the question overtime will be: is the “Buy” button just a nice addition to the social network platform or will it change the whole nature of tweeting?

Chen, Gina Masullo. “Tweet this: A uses and gratifications perspective on how active Twitter use gratifies a need to connect with others.” Computers in Human Behavior 27.2 (2011): 755-762.

Verdegem, Pieter, and Shenja van der Graaf. “From Participatory Culture To Prosumer Capitalism: Imaginaries Of Transparency In The Age Of Corporate Surveillance.” Social Media and the Transformation of Public Space. University of Amsterdam, 2014.