US Open Sessions: algorithms in culture

About Auke Akkerman
I was born in 1990 and raised in Arnhem, the Netherlands. After getting my high school diploma, I moved to Amsterdam to study “Dutch language & culture” and later on I did “Business & Economy”. Roaming around Amsterdam these years, I realised I missed DOING something and frankly I wasn't all that hyped about studying at all. I quit my business study, took a little trip to the USA and eventually started to study “Communication and Multimedia design”. I graduated in june 2014 with a concept to support municipal garden by using an online platform. In march 2010, I founded a company called Wrap. We use a goal & user centered approach to help clients get the most out of their digital communication. We develop concept and strategy with a strong focus on web design and development.

A little over a week ago on September 6th Kei Nishikori very surprisingly beat Novac Djokovic in four sets at the US Open semi-finals. Meanwhile an algorithm developed by IBM turned this match into music (Titlow). In order to create this song James Murphy, the man behind the dance-punk band LCD Soundsystem joined forces with IBM. A vast array of data containing player movement, number of shots, winners, unforced errors etc. is collected during the match. This data is then algorithmically being transformed into musical tones. In fact, all the matches that were played at the US Open have been turned into a combined 400 hours of music. All songs were available live and can be played back on a subdomain of the US Open website called US Open Sessions. The matches are presented not only through sound but trough visuals as well. The created songs were later remixed by Murphy into a more approachable form (“Hear James Murphy’s US Open Remixes”). What is interesting about this process is the replacement of the creator in the making of music and the influence of algorithms on our lives. Who or what is really making the music? 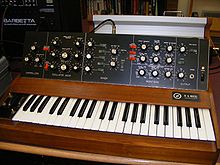 A definition of music that is used very often is French composer Edgard Varèse’s description of his own music as nothing more but ‘organized sound’ (Varese and Wen-chung, 18). Furthermore, musicologist Jean-Jaques Nattiez proposed that ‘ The border between music and noise is always culturally defined’ (Nattiez, 4). Despite a wide range of definitions of music, it has always been considered an art involving the expression of human emotions. The Oxford Dictionary defines music as: ‘Vocal or instrumental sounds (or both) combined in such a way as to produce beauty of form, harmony, and expression of emotion’. Throughout our history, different innovations have changed and shaped the definition of music. The perception of music has been changed by the invention of technological mediums to carry music such as a vinyl record or a cd. A musician no longer needed to perform the music in order for a listener to hear it. Another stretching of the perception of what music is or is supposed to be occurred with the creation of synthesizers (such as the Minimoog displayed on the right). Sound as expression of electronic currents instead of the vibration of natural objects. In all these developments one thing has remained the same. Music is a cultural phenomenon that has a creator who expresses. This creator invents melodies, rythms and arranges different noises and sounds in order to create a piece of music.

In this video, describing the process of making the US Open Sessions’ music, James Murphy very aptly says:

‘The primary music generator is the algorithm, it’s not me. I’m not writing music, I’m generating probabilities for music.’ (Making Music with Tennis Data)

This project gives rise to the question of the creator. The creative mind behind the music is effectively replaced by an algorithm. Perhaps Wolfgang Amadeus Mozart would have written a piece on the semi-finals that captured the intense emotion of a David and Goliath-esque story. The algorithm captures the same event, but has no emotion. In the case of the ‘music’ created based on the US Open tennis matches, there is no direct link between the musician and the sounds that are arranged. The algorithm is based on choices that a musician makes translated by a programmer into the actual code so the vague remains of a human element still exist in the final piece. The key difference is that the sounds we listen to are no longer arranged or composed by a human being, but rather generated with predetermined mathematical precision. Where playback mediums took away the magic of a live performance, algorithms take away the liveliness of the creative process that is making music.

Again from the video describing the making of the US Open Sessions:

‘… in between there is this layer that has to translate between the tennis data and the music data and that’s really what the algorithm is doing’ (Making Music with Tennis Data).

More generally speaking algorithms form a layer between us and the world and control our lives in an ever increasing fashion. Seen for example by Gilles Deleuze as a society of control, one that is operated by computers (Deleuze) and thus their algorithms. Or as posed by Lawrence Lessig, who claimed that ‘Code is Law’, describing code as a form of social control (Lessig). Whether they are Google search algorithms, Amazon’s algorithms to suggest new products or the algorithms used by the stock brokers to predict the rise and fall of certain stocks, they form a larger part of our world than we may perceive. Kevin Slavin described this tendency in his talk at a TED conference in 2011. He recognises how algorithms shape our world, not just by mediation, but by actually determining what that world looks like. One of the most striking examples is an algorithm that recognises patterns in stories in order to write more successful scripts for movies. Successful in this case means ‘the most profitable’.

The US Open Sessions shows the power of algorithms in a new and creative way. Simultaneously it gives us a peek in what may be a world of culture produced by algorithms. James Murphy might not lose his edge to the new kids on the block, but to the mathematical algorithms that know us best.

Nattiez, Jan-Jacques. “Music and Discourse: Toward a Semiology of Music.” 1990: n. pag. Print.