Kashing in with the Kardashians

Kim Kardashian is one of the most divisive personalities in Hollywood, but her eponymous mobile game is the runaway hit of the summer. Since its launch at the end of June, Kim Kardashian Hollywood has been downloaded millions of time and has been making millions more on in-app purchases. It generated $1.6 million in revenue during its first five days on the market. Some estimations predict it will hit $200 million by the end of the year, including a cool $85 million for Kim herself.

For the uninitiated, KKH is a mobile, narrative role-playing game, developed by Glu Mobile, in which you star as a poor, unknown clothing store clerk in Los Angeles whom Kim plucks out of obscurity. The goal is to get as famous as possible through appearances, magazine photo shoots, bit acting parts and dating. 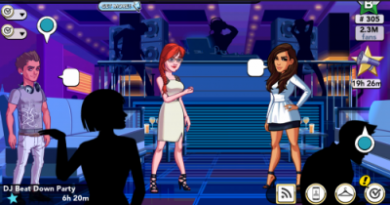 Making a club appearance with Kim , where I’ll mingle, engage in “industry talk”, buy rounds and show off my sweet dance moves in pursuit of the A-list.

While Kim’s public persona may come across as vapid and shallow, the game provides an  interesting reflection of how we have come to  understand celebrity, our culture and they way we present ourselves. As well as some amazing new business and tech milestones.

On track to being the biggest mobile game of the year, many have speculated as to the reason for its popularity. Yahoo laid out a psychologist’s interpretation, starting with the engaging visuals of the game. There’s also the instant gratification of taping an area of the screen and a bundle of cash pops out. Says psychologist Simon Moore:

It’s the most fundamental law of psychological conditioning. The quicker we get a reward for an action, the more likely we will remember and repeat it. 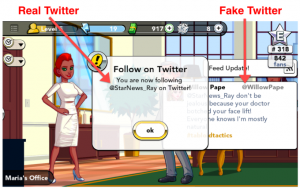 The game reflects everyday realities such as the need to hustle, struggling to balance work and relationships, money is a competitive advantage, pursuit of the American Dream, and

Yet it has a progressive streak, a characteristic of many digital spaces, allowing for the player to be any race, gender or sexuality without it hindering their success. Niccolo de Masi, Glu Mobile’s CEO, cites this as one of the reasons that the majority of their players are women, a notoriously hard demographic to capture in video gaming.

There is certainly also an element of peer pressure, both from within the game’s celebrity and status-driven world, and friends on personal social networks. Which leads to one of my favorite theories – and most telling in the new digital space – which comes from TechCrunch and is something they call a “viral oops“, where a user drives traffic towards an app or service but doesn’t quite realize what they’ve done. In this case, it’s advertising the game on Twitter, unbeknownst, by following accounts presented to you in gameplay (see graphic to the right) that become real follows and real tweets.

In-app purchases have become the leading revenue stream over the past few years, leading to a debate of the ethics when consumers start spending way more money than they realize. In the KKH world, money is vital. And just as the line of reality is blurred between in-game social media and real world social media, so is the cash. If you run out of virtual dollars, you can use real ones to buy more. You either wait or pay, because time is money.

Recently, the EU Consumer Protection Cooperation ruled that apps and games with in-app purchases should not be advertised as free. Google has already removed the term “free” from their Play Store listings regarding such apps. It is unclear, if the policy with be implemented in the United States.

This type of regulation is in large part a reaction to parental outcry in regards to their children spending copious amounts of virtual money in games that translates into real money from their accounts. When even lots adults are fooled or ignorant, children must be protected from these kinds of traps. In addition, up until this summer, Apple’s in-app purchasing system allowed purchases to be made from a certain iOS account up until 15 minutes after initial authentication, no matter who was using the device.

However, limiting IAPs means limiting revenue, which would hit developers hardest. Blockbuster apps generate capital for smaller more significant projects. Regardless, limiting income is something few companies would be willing to do. We’ll have to see if the next mobile hit features the same IAP structure. For now, Kim is counting her money.