A New Kind of Pop-up Book

About Janina Sommerlad
Janina (Nina) did her Bachelor degree in Politics and English Studies at the Goethe University in Frankfurt, Germany. Afterwards she attended the further education program, called Book and Media Practice at the same university. She enjoyed the course Online Publishing a lot and quickly decided to do her Master based on the subject of New Media Studies. The UvA offered a pretty suitable program and also appealing out-of-school activities (CREA / USC) and that is why she applied… and now enjoys life in beautiful Amsterdam!

Early pop-up books are made out of pure paper. Each time the kid opens a page, an architectural piece of art jumps out of the book. In 2014, it looks much different. Bridging Book established a new mixed-media book for children and presents a combination of book and eBook. To experience the digital-print combo, parents have to equip their kids with the picture book, the app and a simple touchscreen device. The book should be placed below the device that the contents get synchronized. When the kid flips through the print pages, the pad extends the book’s illustrations with animations, short texts and sound. Cool, eh? See the promotional video below:

Paper becomes interactive – how does it work?

Magnet is the magic word. The Portugal-based engageLab uses magnets incorporated into the printed book that can link to the tablet’s built-in compass. The software is able to identify the different strengths of the magnets from the sensor, and “when a page is flipped, the new cumulative sensor’s reading will be decoded as a page number“ (Figueiredo, Pinto, Branco, Zagalo, Coquet 571). 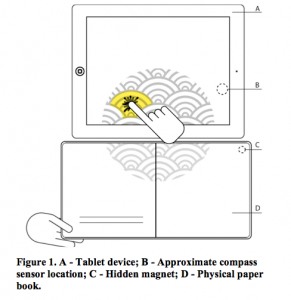 Bridging Book is still in production and not yet for sale but the concept presents a new form of reading and goes beyond what is offered by simple interactive eBooks. Or not?

A real book combined with an electronic version sets apart from kid’s amusements that only come along with a digital device. The engageLab’s researchers really do a good job and deserve credits for that. However, it is likely that children easy familiarize themselves to the special reading experience that is coupled to two different mediums. Indeed, it can be so much fun when moving things are jumping out of a normal book. But what if it comes to reading a standard book, just binding and pages? Children might get bored or even confused when finding out that the inside only consists of letters or “dead” pictures. Are they even able to fall in love with a book that doesn’t extend it’s content interactively?

Classic books let the reader automatically create pictures in mind or further thoughts of the story. Digital ones merely prevent the reader to produce “imagination and empathy” (Sharabi). Book apps for children sometimes have more the character of a game experience rather than a dispute with the book itself. Kids only learn how to tap on the tablet: Press the balloon to change it’s color. Doubtlessly, the apps are exciting for children and in regard to the 21. Century, they are unavoidable. Confronting the young generation with new media objects can also be advantageous due to the fact that they quickly learn how to deal with the technique and might have little difficulties in adult life.

Obviously, interactive books can be quite helpful but back to the topic, do they really engage kids in a story? The British children’s book writer Julia Donaldson says No. When she was asked to create an eBook version of her most popular work, The Gruffalo, she simply refused:

“The publishers showed me an ebook of Alice in Wonderland. They said, ‘Look, you can press buttons and do this and that’, and they showed me the page where Alice’s neck gets longer. There’s a button the child can press to make the neck stretch, and I thought, well, if the child’s doing that, they are not going to be listening or reading, […]“.

There are endless debates whether interactive elements limit the ability of children to read or not. In the end, it is up to the parents if they want to provide their junior with new digital innovations. Fact is, proper books will never have the same aura for the young generation as it had for elderly. That is, because we are living in a modern world that overwhelms us with permanent novelties. Anyway, mixed-media innovations such as in the example of Bridging Book show an attempt to remain faithful to old media and at the same time to get prepared for new media. Bridging from the traditional physical book to the digital world of wonders can therefore be an attractive alternative to simple eBooks.