Get Water! Have fun and make a difference

About Giovanna Salazar Ojeda
Giovanna is currently a graduate student of the Research Masters in Media Studies, specialization in New Media and Digital Culture, at the University of Amsterdam. Her fields of interest range from political communication, to ICT for development, new media phenomenon and human rights. 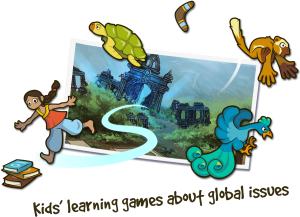 What if someone told you that by playing a fun digital game you could raise awareness to a current global issue, promote learning and education, or perhaps even help solving relevant problems at a local, national and/or international level? Interesting, right?

Throughout history, countless concerns have been addressed with the aid of science and technology. Particularly the communication and information technologies, because of its broad penetration, appear to have incredible potential to boost social transformation. In this sense, the rise in the popularity of the video games industry has lately favored the emergence of the innovative idea of improving social conditions in the world through games.

A brief survey online reveals that, within the game studies discipline, there are several areas dedicated to the study of the uses, developments and effects of games intended for purposes other than mere entertainment, among of which are the following: game-based learning (GLB), digital game-based learning (DGLB), e-learning, edutainment, serious games. Aside from describing these related and sometimes overlapping areas in the gaming theory, our Google-search goes to show that there is a vast new media area that could, and perhaps should, drive social change through enjoyable, approachable and empowering digital games.

Get Water! An app with social value

An example of the above is Get Water! the first mobile game of Decode Global, a game developer focused on teaching children about topics of relevance in the world.

The idea behind this app is to bring fun and entertainment to kids while specifically addressing the problem of water scarcity and its effects on health and education of kids, and specifically of girls around the world.

In this sense, the app serves two purposes: first, to inform about the topic, second is a call for action (it encourages users to do something about it, by for example giving small tips and suggestions on how to save water in our every day life).

Like most other games, you start off with a brief tutorial, where you get to know Maya’s situation. She is a girl from a poor country trying to study, but while she’s in class her mother comes to inform her they are out of water, thus she is taken out from school and embarks on the adventure of collecting fresh water for her family.

To help her on the journey, you have to swipe your finger below her feet to create a wave that will allow her to go higher to catch raindrops, while you avoid several obstacles, such as mean peacocks, rude turtles, crazy monkeys and dirty water. As you run through the levels, skills and supplies are unlocked in order to help you fill Maya’s water pot more rapidly.

Overall, the game is challenging, but intuitive. It is available for download for a really small amount of money at the AppStore, Google Play, Amazon or even at the Windows Phone Store (a percentage of the revenues are donated to Charity: Water, a non-profit organization that brings clean and safe drinking water to people in need).

It is noteworthy that several technological sources, such as Gamification Co, Mashable, Venture Beat, Gamereactor, and press sources like The Guardian and Huffington Post, have already applauded Decode’s Global initiative, nevertheless, Get Water! was launched since March 2013 and according to Google Play, it has been downloaded roughly 50 times, meaning that despite the relevant goal it aims to accomplish it has not managed to gain quite a lot of popularity. Whether this has had to do with the design of the game, its marketing strategy, the diverse interests of the players its destined for, or any other possible explanation, this post will not be able to determine it, we can only hope that the evolution of digital gaming with a laudable purpose continues to expand and improve.

So, if you are passionate about technology, games, design and social activism, this might be an area to pay close attention to. I know that so far the refreshing projects from Decode Global, Fingerprint, Games for Change, The Institute for the Future, among many others, have already peaked my interest. 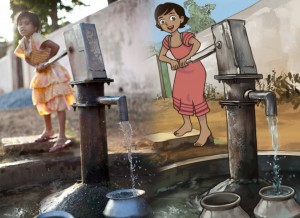 Game Studies. The international journal of computer games research. 2014. The Swedish Research Council. The Joint Committee for Nordic Research Councils for the Humanities and the Social Sciences. IT University of Copenhagen. Lund University. 13 September 2014. http://gamestudies.org/1401

McGonigal, Jane. Reality is Broken: Why Games Make us Better and How they can Change the World. New York: The Penguin Press, 2011. 9 September 2014. http://books.google.nl/books?hl=es&lr=&id=yiOtN_kDJZgC&oi=fnd&pg=PT23&dq=reality+is+broken&ots=fifdXH5XRw&sig=bZVeDNTkVTmBgZPCXFqU6cvsHqk#v=onepage&q=reality%20is%20broken&f=false