“Today we are beginning to test a new way for you to discover and buy products on Twitter . . . Users will get access to offers and merchandise they can’t get anywhere else and can act on them right in the Twitter apps for Android and iOS; sellers will gain a new way to turn the direct relationship they build with their followers into sales.”

It is estimated by ADWEEK that about 25 brands, musicians and various nonprofit organizations are among the beta partners that will participate in beta testing sales. 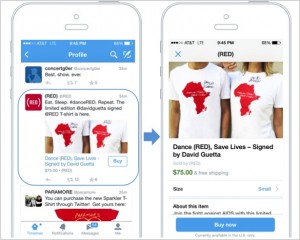 Twitter’s new “buy” button allows users to buy a product with only a couple of clicks. Image courtesy of Twitter.

Although it may seem surprising, Twitter’s addition of e-commerce fits into a broader trend in social media marketing. The United States Census Bureau published its annual report on May 22, 2014 and stated: “U.S. retailers reported e-commerce sales were $227 billion in 2012, up 14.7 percent from a revised $198 billion in 2011.” With the rise of e-commerce sales, The New York Times reported that companies such as Pinterest and Facebook have either added, or are in the processing of adding, e-commerce abilities. With every other major social media website opting to add e-commerce functions, Twitter isn’t innovating as much as merely following suit.

In Ecommerce, published by InTech in February 2010, the authors stated that according to Robert F. Lusch, a Marketing professor at the University of Arizona, “It is the business firm that uses the acquired knowledge for the customer and develops marketing techniques to manipulate the customer choices. The role of the consumer remains passive and exogenous to value creation” (Fragidis, Kotzinos and Tarabanis 2). While establishing a market for specific merchandise is typical for traditional marketing, this is not necessary for the Twitter “buy” button; instead of a building a market to suit a product, a group of followers is selected and by developing exclusive products to meet their needs a ready-made market is realized.

Users being target by who/what they follow on Twitter is key to the success of the “buy” button. According to ADWEEK:

“Musicians in particular are a big focus in the test, likely because of their significant Twitter followings. For example, beta partner Demi Lovato has amassed 24.3 million followers  . . . Using the new commerce-enabled feature, they’ll be able to sell concert tickets, merchandise or albums from the social platform.”

Once a user makes their first purchase, whether it is of Demi Lovato’s new single or a piece from Burberry’s new line, payment and shipping information is automatically stored for future purchases. Twitter’s blog explained, “we built this test experience with your trust and security at the forefront. Your payment and shipping information is [stored] after your first transaction, so you can easily buy on Twitter in the future without having to re-enter all of your information.”

Anne Hart of The Guardian, however, points out that users should be aware of a few important implications of the “buy” button. With payment information being saved, users who frequently use the platform when intoxicated, may have to be a bit more aware of their actions. Rather than merely tweeting a regrettable comment, now users also have the ability to easily buy an item they may later regret. “The morning comes to us all, cold and unforgiving, and shame-scrolling through your bank statement stings a lot more than your Twitter feed,” Hart said. Along with this situation, Hart listed a number of scenarios where the “buy” button may not act in favor of users. Examples include the regret of rapid-fire buying, where buyers may instantaneously purchase items and then regret doing so; another issue could be users buying items they neither want nor need, merely due to celebrity endorsements through Twitter.

The concerns raised by Hart, alongside Twitter’s fundamental shift towards e-commerce, could become a cause for concern. As Twitter begins to transform — from a platform which allows users to follow specific accounts based on these interests, to a micro-blog that is now commercially targeting users based on these same interests — the central question becomes if users will accept this intrusion of commerce.