Since the beginning of its age, the Internet has been a site where users could (more or less freely) express their opinions. Social media platforms were created exactly for this purpose and their rapid development has had a global impact. The wide variety of social media platforms offers a range of possibilities to express different opinions, but the methods for their projection are limited and restrictive. On several different websites, we are able to express our approvals: Facebook’s Like, Google Plus’s +1, or Twitter’s Star are only positive. In some cases, we can also encounter the possibility of expressing upvotes and downvotes, for instance: YouTube’s thumbs up/down, Twitter’s retweet, or reddit’s upvote/downvote. 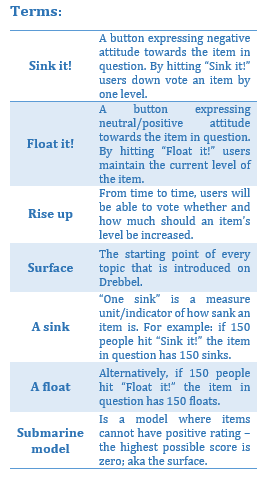 This project was created in response to the lack of platforms where it was possible to express uncensored negative opinions. If a user comments negatively about a certain topic, most platforms allow the moderator to manipulate content and clear it from all negative publicity. With Drebbel project, we have introduced a social media platform aiming to engage new users and create a new audience, where they could express freely their thoughts in a critical way. Users are encouraged to share their reasoning behind both negative and positive attitudes. Positive comments are welcome, however, upvoting is not possible. Drebbel uses the basics of social media platforms to reach users on a familiar territory but at the same time it acts as a critic to the already established social media site variations.

Drebbel’s downvote technique uses a metaphorical tool: a submarine that allows users to ‘sink’ or ‘float’ the topic. By introducing these tools, we give users the opportunity to go beyond expressing their opinion; we encourage them to share knowledge about a certain topic which would otherwise have stayed hidden. The comment section is one of the most important features as it allows users to argue their viewpoints.

Since our idea is based on a submarine model, the highest point where the submarine can be  is the surface/zero level. This is also the starting point of every topic that is introduced on Drebbel.

Currently, Drebbel is operational in beta version and has been introduced only to a testing audience. The final idea is to create a ‘Sea of Topics’, where all the opinions would be gathered, and the buttons, designed as submarines, would allow users to downvote the one they choose. By hitting ‘float it’, the submarine would stay at the same level and by hitting ‘sink it’ the submarine would sink deeper. Drebbel encourages users to share their experience on other, already established social media platforms and help expand the critique we introduce.

On our beta version of the page, we introduced “brands” as our first category of topics. However, Drebbel’s aim is to cover as many topics as possible, including topics of everyday life, funny situations, ideas, products, applications, pop-culture phenomena, personalities, or perhaps weather. The variety of topics on Drebbel would expand quickly due to the user-generated content. For the prosperity of the page and because of the Policy Terms, the administration team would preview the added user content before it would be available for rating.

The homepage shows all available topics that users can sink and provides an overview about the page. Drebbel’s rating system will provide detailed statistical information about the sinking/floating history of a certain topic. Once the web page has gained enough user interaction, it will be possible to visualise the data sets of the ‘Top 5’ sank topics in form of graphs. As Drebbel grows, it will produce quantitative data sets, such as sinking history, demographic and geographic informations, or number of sinks/floats for a specific product. By observing the previously mentioned data sets, it will be possible to create content or discourse analysis showing why and how the topics are disliked or related. For different fields such as the Internet psychology or sociology, communication analysis, group dynamics and cohesion are also observable. Insights of this kind would be available on-demand only.

In case our project wins the popularity of masses, we consider expanding our idea of a global critique. The original idea was allowing companies (and/or individuals) to donate money to charitable causes in order to improve their positions. However, after presenting this idea to a larger audience, it was rejected for being overly complex. Hence, we will allow the users to decide about items’ rise ups themselves in a regular voting. This feature will not open the possibility to upvote the topic, just allow users to remove their down vote.

The theoretical background behind social media is based on an article about the psychology of Facebook where ‘liking’ can appear as a type of social engagement with other users. It also drives individuals to get engaged by liking back or by leaving comments/personal opinions about a topic. However, it is a complicated activity. Facebook “likes” are also becoming less relevant due to the increasing number of fake accounts.

“The accelerated growth and scope of Facebook’s social space is unheard of us. As of late 2012, Facebook is said to have more than one billion active users, ranking in the top three first destination sites on the web, worldwide. (…) On the different platforms, from LinkedIn to Google +, we are all busy befriending, ranking, recommending, retweeting, creating circles, uploading photos and videos and updating our status. (…) Yet, despite its massive user base, the phenomenon of online social networking remains fragile. Just think of the fate of the majority of social networking sites. Who remembers Friendster? (…) Lately, social media companies have emphasised the first and neglected the second, obsessed as they are by hyper-growth at all costs. It is time for designers, programmers, and geeks and nerds of all nations to step in, realise the dark sides of corporate-state control and become active. Either the startup cult will have to be radically reformed or blown up all together.“ (Lovink, Rasch; 2013)

Drebbel has a fresh viewpoint. It allows for rating and discussing problematic topics of our society without the omnipotent interference of those who are being discussed. Don’t dislike us. Sink us!

So what are you waiting for? Welcome aboard Drebbel, join our crew and start sinking!

Lovink, Geert, and Miriam Rasch. Unlike Us Reader: Social Media Monopolies and Their Alternatives. Institute of Network Cultures, 2013. Print.