About Gina
Janina (Nina) did her Bachelor degree in Politics and English Studies at the Goethe University in Frankfurt, Germany. Afterwards she attended the further education program, called Book and Media Practice at the same university. She enjoyed the course Online Publishing a lot and quickly decided to do her Master based on the subject of New Media Studies. The UvA offered a pretty suitable program and also appealing out-of-school activities (CREA / USC) and that is why she applied… and now enjoys life in beautiful Amsterdam!

Social media is not a new phenomenon. Many people know how to deal with the different platforms that help to engage with each other by sending and receiving messages, sharing information or uploading pictures. The infographic of April 2014 shows common networks that people are using these days. Perhaps unsurprisingly, Facebook holds the majority record with over 1 billion users worldwide, Twitter has over 600 million registered users and the photo-sharing platform Instagram has around 200 million active users [2]. 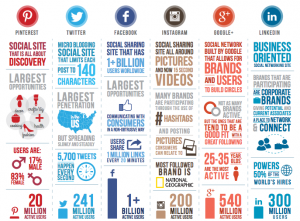 It is important to notice that social media is a term that characterizes the collective use of various platforms. Normally the networks guarantee a simple way of functioning that makes it easy for users to start and become involved. However, there are people who are familiar with social media but want to improve their knowledge and want to become more aware of certain handling and trend activities. Moreover, for some users it is important to understand the special elements that the platform features and how their communication with these features may affect them. This is where the blog Working the Social Network comes into play.

Social media is an ever-growing part of the web and a lot of the current users encounter a number of difficulties navigating these platforms. Therefore, the blog sets out to create a simple learning platform in which the users are able to analyse the common mistakes of others and in return allows users to avoid these mistakes themselves. Unlike other tutorials, this one adopts more of a satirical education style, in which the user learns through comedy. The blog aims to tackle the problem of user’s awareness when it comes to their privacy, sharing ability, account settings and the language. In order for them to understand there are set examples of incidents and also suggestions to remind users of their choice of action.

The Do’s & Don’ts category describes actions an user can carry out and others that should be better avoided. For example when looking under the Don’ts list we advise users: “Don’t add random people to your account, stick with friends!” which is followed by a funny Meme [3]. 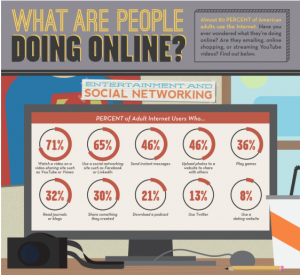 “What are people doing online?” designed by Column Five

Recent statistics give evidence about what people are actually doing online. The infographic breaks down online activities into several categories. We used the statistic as a basis for our choice of top activities. As the majority of internet users spent their time on the internet watching videos, we decided to use such format to visually illustrate our “tutorials”. A great amount of users (65%) spent their time on networking sites such as Facebook. Therefore, it was important for us to choose common activities referring to Facebook such as Liking and using Hashtags. 45% of the internet users upload photos to a social network and share it with others. Hence, it was also necessary to display photo-related activities – that is, taking a selfie, photobombing and tagging. Alongside the top activities, the blog also addresses the term Top Terminology in which the top enlisted Neologisms [4], Chat slang [5] and #Hashtag [6] are explained and elaborated on. Lastly, the blog sets out to show the importance of knowing the way around social media, in which there are 9 specific reasons to why the blog is useful to you. This category is also supported by illustrations which are funny at the first glimpse but should also alarm the users of being careful that it does not happen to them. This includes addressing the issue of privacy:

The majority of social media users seem to think this way:  “As long as I have nothing to hide, privacy issues are not a priority for me“. But privacy matters even though users are not hiding nothing because privacy issues affect the working of the entire web. Even though users may affirm that privacy is less important for them, they still use different passwords to lock their daily conversations. New users are taking the existing social networks for granted and they tend not to criticize its functions. Because of this, raising awareness about different privacy issues is needed.

When navigating and working your way around social network platforms the user quickly gets the feeling that he/she has unlimited choices and freedom to do whatever they please. This feeling of freedom is however quickly crushed by the notion of having to live your online life governed by a strict and complex set of social Do’s & Don’ts.

A lot of our blog focuses on the development of an online social persona. For example in the Do’s section we give the user suggestions of what is perceived to be “cool” in the online world. This notion of “what is cool” is heavily critiqued by the online community. “Social media ideology promotes information to flow freely and information consumers to determine the value of the information” [1 / 143], since all the consumers determine the value of online social information (such as the use of Memes) one virtually gets social assessed by one’s peers to examine if your actions can be seen as “social cool” [8]. Which in turn is gauged by the number of retweets or likes that your status gets.  This constant social governing of ones actions leads to a loss of identity in order to fit into the social norm. For instance, our blog features a video showing the user how to take a Selfie. So if we examine the visual portrayal of one ’s self (Selfie) we see a complete loss of identity. By jumping onto the bandwagon of the Selfie culture you have effectively erased you’re your own identity and adopted the one of the masses.

In the days gone by one could perhaps have a day where one did not bother too much with one’s appearance, however in the present day this has changed. We constantly need to be aware of, if we are going to be photographed and if that image will make its way up onto a social media platform on which it will become a “permanent record” [9] of ourselves. Often people consider their life to be empty without the constant documentation of one’s identity on a social network platform, and because all these records are kept online it becomes vital for the user to make sure that the information about him/her is something that they are happy to be labelled with for the rest of their lives.