During a special media event organized on September 9th, in San Francisco, Phil Schiller, Apple’s senior vice president of worldwide marketing, officially introduced to the public the new iPhone 6 and iPhone 6 plus. Alongside with user friendly updates such as 3D touch – a screen that is sensible to different levels of pressure – Apple showed off the very requested cameras upgrades, now with 12 megapixels, and a new feature called ‘Live Photo’ that promises to revolutionize the way we take and experience pictures.

This new technology allows you to snap photos as high-quality animated gifs, capturing multiple frames just before and a little after the actual moment of the picture. You don’t have to do anything different, just take the picture and the app will automatically transform it into a live record of your bests moments.

“When you go to your photo role and swipe across them, you see a little bit of a moment of vitality, a sense how alive they are, it’s a beautiful experience, unlike any other way of interacting with photos”, Schiller says while showing how the images get a frame of movement when slide in the photo album. The full playback lasts only 1.5 seconds and it can also record sounds, but “these are still photos, they are not videos”, Schiller reaffirms. Apple refers to this new photo format as an efficient frame to frame technology compression.

Nonetheless, the demonstrations made by the executive were pretty impressive. It feels like having the Harry Potter world right in your pocket. Mathew Panzarino, Editor in Chief of TechCrunch, gives more details on how the magic works:

It has to be said that this type of functionality is not completely new. Both Nokia’s Lumia ‘Living Images’ and HTC’s ‘Zoe’ have tried to introduce moving images into the market. The difference now is on reach. ‘Live Photo’ not only will be supported by all Apple’s devices – including apple watch – but the company is also working with Facebook to enable this feature by the end of the year.

The fact is that the big the breakthrough is not on the technology itself, but on how Live Photo can profoundly impact the way we live and share our experiences. On a recent essay about the impacts of new media in the reconfiguration of spectatorship, Graig Uhlin, explains how GIFs can work “as an emblem of an original experience”, an amulet that reclaims and summarizes context, narrative and spirit of the moment: “They are tokens of spectatorship, they retain the memory of the spectatorial experience beyond its initial encounter”.

Imagine being able to take a glimpse of your friends energy just before a group picture, or remembering the feel of the wind blowing your hair that time you went to the mountains. That fraction of movement can be enough to take you back. The relationship between the user experience with the moving image is something that classical film theorists called the “modern magic”, in which the viewer is bewitched by the timeless environment that the film depicts and takes himself into another “physical reality”. According to them, this media has an animistic aspect to it, “since it endows its depicts objects with a ‘semblance of life’”. 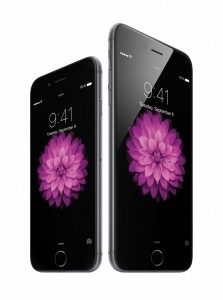 The iPhone 6S and 6S Plus will both come in Space Grey, White, Gold and Rose Gold. Each device will also offer 16GB, 64GB or 128GB of storage. Credit: Apple

Although some critics seem less than impressed with the new iPhone’s feature, claiming it will only eat up our – already very limited – storage, most users, including visual artists, are very excited about the novelty and see it as a new way to capture visual data and share their experiences online. In an interview to the website Cultofmac.com, photographer Casey Berner says that “what makes Live Photos exciting is more about the users. It’s a gimmick, but if some creative people out there really make something of it, it could be a great new way to share moments.”

There is no doubt that live photos will expand the way we think about photography. Sure, we will have to deal with some animated cats and babies on our timeline, but we also will watch in awe the beautiful pieces of art this new media format will inspire.

The new Live Photo app together with the new iPhone 6 and iPhone plus are excepted to be available in store shelves by September 25th.