When in doubt: choose Dvel


Making choices isn’t something you have to do completely on your own; there are more than enough tools, websites and apps that can help you with that rather than discussing issues with your family and friends for instance. But instead of spending loads of time on finding out which choice is the right one, there is now an app named Dvel that helps making decisions in an instant.

Pizza or pasta? Going out for a run or heading to the gym? A stylish pencil skirt or a classy pair of jeans? Whatever you’re up for, Dvel (this is how you pronounce it) will make the choice for you by letting the users of the app, which they call ‘the community’, vote. It starts by choosing two pictures to upload, a green smoothie for example and a picture of scrambled eggs. Then users decide which choice is better. Only the person who has uploaded the picture, can see the amount of votes for each picture (Van der Kolk). Also you the app doesn’t allow you to upload more than two pictures at once, it’s either choice A or B. 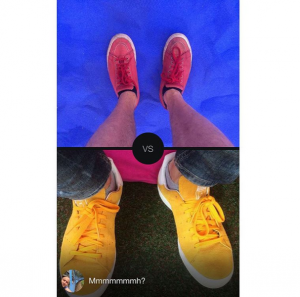 At first sight the app might seem like a renewed version of an opinion poll. However, this time the app allows you to ask other users explicitly to review choices within a specific interface. The interface is designed for human decision-making (Roller); it makes a comparison of two pictures and there is no way you can add to that or deviate from it besides agreeing or not agreeing with the picture. The effort that is needed to make a choice is set to a minimum, which is exactly what makes the decision-making process attractive – people tend to avoid investing time, money and consideration when making choices.

The question that arises when talking about the community of Dvel is who were talking to when speaking of ‘the community’. Think about the following: it’s Saturday night and you’re about to go on a date. Within a few minutes, it’s already clear that people are more in favour of the pencil skirt than the flaired jeans. But what if a well-known fashion blogger you’ve been following for years voted for the pair of jeans? Would you still consider wearing the pencil skirt? Some opinions might be more valuable than others. One way to differentiate famous people from ‘regular’ users is a badge or a blue tick box like Tinder introduced for example (Wright), but then the app would have to display all of the users that voted instead of only showing the amount of votes.

Getting to see which picture does better opens up the question of how the app will develop in the future: will it be a place where entrepreneurs get to test their products before they launch it? Will the app contain profiles that only want to gain more popularity and is it then a broad collection of people wanting to be famous? Or is the app actually used to make decisions for humans on a daily basis easier? As far as there is to see, the developers of Dvel wouldn’t deny the fact that the app helps to grow a bigger audience. CEO Peter Buchroithner contributes to this question by saying the following about an early user of Dvel: “I’m sure Lara will grow a huge follower base when dvel is growing” (Product Hunt). Engaging with brands then wouldn’t be that much of a surprise, although the founders say that it’s not one of their concerns right now: “We’re convident to find a way to monetize without annoying our users, but we’re not on focusing on this at all right now” (Product Hunt). The app Viceversa is similar to Dvel and from looking at their website, it seems that they do embrace working with brands, entrepreneurs and bloggers.

Apps like Dvel – even though Dvel in a very early stage of development – are part of a new paradigm in which brands and products have found their way through apps  (Zhao and Balagué 305). Although putting yourself out there on Dvel might seem an quick and easy way to gain attention for a new product, the biggest brands would probably be hard to find. Well-established brands are more likely to develop an app by themselves, which turns out isn’t a bad idea. Brands that take into account an app strategy create an increased interest and have a positive persuasive impact (Zhao and Balagué 306).

Whether Dvel will only be an app to make instant choices remains the question. And even though it seems that Dvel could be interesting for starting entrepreneurs as well, it is important to remember that still there are some choices that we don’t want to display. Therefore, it would be more assumable to say that social influencers such as bloggers and vloggers, people that genuinely want to show off their choices and have a big audience because of their sense of style, are more likely to use Dvel.

Wright, Mic. “Tinder is introducing verified profiles to make sure your famous swipes are for real.” 2015. The Next Web. 13 September 2015. <http://thenextweb.com/apps/2015/07/07/tinder-is-introducing-verified-profiles-to-make-sure-your-swipes-are-for-real/>.