Mobile apps designed for couples to communicate in a private setting has started to gain popularity in the past few years. In the West, there are apps such as Couple, Duet, and Avocado. In the East, Between, an intimate social network app created by Korean-based startup VCNC, is the most popular in Asia.

What sets Between apart from the rest is the unique feature of sticker store. Through in-app purchases, couples can get special sets of stickers that Between launched way ahead of similar apps.

Based on the concept of “cute capital” proposed by Larissa Hjorth, these sets of stickers have demonstrated the important role of stickers/emoticons in new media, which has become an essential part of the emotional, creative and financial investment in online communication (Hjorth 2).

Between has many features that help couples create an intimate narrative of their own. Couples can plan activities together by using its special calendar, which allows users to set up anniversaries and reminders for important dates and future events. Couples can also archive their memories by sharing photos and videos as “memory”, which allow them to build trackable galleries and albums of their own. However, most importantly, Between allows a one-to-one private chat with customizable stickers to communicate anytime, anywhere.

Between has over 40 sets of stickers available for couples to purchase within the app. These stickers are not only an important element for colorizing communication, but also a lucrative form of income. According to the news, Between mainly monetizes through advertising and in-app purchases of stickers (Shu) . 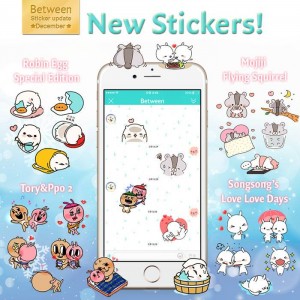 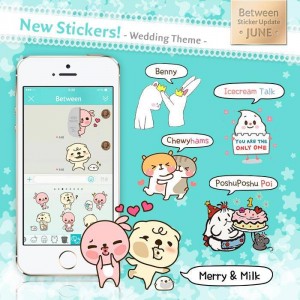 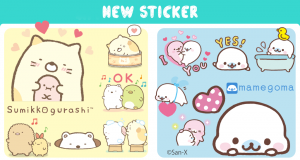 Nowadays a lot of people start using emoticon or emoji to express and communicate in digital space. In the age of new media, we often invent new communication tools for the new interpersonal interaction, as digital relationships are becoming the dominant form of social interaction in the modern society (Sternbergh).

It can be argued that the emergence of emoticon is a by-product of the kawaii (cute) culture of Japan which started in the 70s/80s (Hjorth 5). Not only is it due to the fact that the famous emoji originated from Japan, but also that the humanization of icons and the concept of childlike upbeat expressions are all part of the Asian “cute culture”.

So what is cute (kawaii) culture? According to White, the concept of cuteness in kawaii culture is “not restricted to children in Japan, though it means childlike and sweet, happy and upbeat — and vulnerable” (White 129). In general, kawaii refers to something childish, adorable, sweet, and innocent. For example, some of the most notable kawaii-inspired media icons are Pokémon and Hello-Kitty, which demonstrate the simplicity and cuteness of the kawaii culture.

In her paper, Hjorth puts forward the concept of “cute capital”, which she believes that “the value of cute culture as emotional vernacular currency, a key form of exchange in the market of online social media and increasing personalization.” (7). She also foretells that “the role of cute cultural capital as a form of affective and emotional language” in social networking media. (Hjorth 7).

Based on the idea of “cute capital”, we can see that the case of stickers in Between perfectly illustrates how cute culture has reshaped the form of language and expression in the online environment. For example, in each set of stickers in Between, there are always a male and female character per series. Some of the stickers are simply a male or female representation of the character, while some stickers show a particular interaction between the male and female characters. By allowing users to access a wide range of free or paid customization, these cute stickers are the new favorite language of the modern day couples. 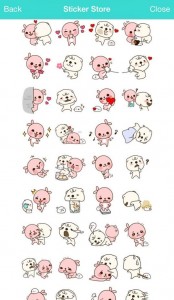 Example of a set of stickers

Couples can choose their own favorite series of stickers that match their personality and use them in creative means. The increase of personalization can make couples feel personally identified with the stickers, therefore heightens the emotional investment in romantic conversations.

There is also a role-playing element in the sticker culture. When the couple keeps using the same character, they feel like they are performing the expression in front of their partners. Instead of the usual lifeless conversation they have on Facebook or WhatsApp, the couples need a new form of dialogue that can differentiate intimate romantic moments from another form of interaction with others in school or work. While using the stickers, it feels like as if the kisses, hugs, silly faces are really their own expressions. There is a certain satisfaction when such virtual interaction gets projected back to reality. Couples gain satisfaction from participating in the role-playing game, and are willing to pay for other sets of stickers that potentially generate another cute fuzzy experience. This allows couples to form stronger bonds through the constant exchange of stickers as a form of intimate interaction. 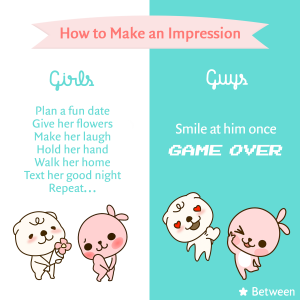 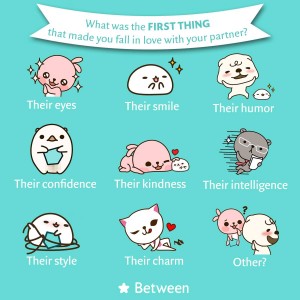 The cute culture has become a dominant agent in the age of social media. The usage of emoticons and stickers is not only restricted to dating culture and private couple apps, as the influence of cute culture can also be generalized to communication between friends and family members.

A brand new set of emoji has just arrived on the iOS platform this year, which make us wonder, what is the future of emoticons and stickers? How will cute culture shape the new digital age (by further getting into the western market)? Moreover, how will the emoji/sticker culture change our way of communication through virtual space and online social network?

Hjorth, L. “Digital Art in the Age of Social Media: A Case Study of the Politics of Personalization via Cute Culture.” Brunel University, 2009. 1–9. researchbank.rmit.edu.au. Web. 13 Sept. 2015.