Internet of things – chances and challenges

About Alina Niemann
Working for almost two years in a Berlin based web agency, I now returned to university to learn about new media research pratices, methods and theories.

The first edition of the Internet of Things Congress took place on the 29th of September 2015 at the Mercure Hotel Amsterdam City. Approximately 200 delegates, experts and entrepreneurs gathered together to talk about the chances and challenges the practices summarized under the umbrella term “internet of things “can hold for their companies.

Different perspectives were given, but one thing all speakers seemed to agree about is, that the coming 20 years will bring a lot of change to our lives through technological developments and we can not yet foresee which direction we are heading with it.

The cannibal is coming

Willem Vermeend, board member of the Internet of things Academy, opened the congress with a concrete piece of advice for companies still not sure how to act regarding the internet of things.

According to Vermeend, the progressing technological developments today’s technologies become easier accessible and also cheaper, fundamentally changing all industries and markets. Companies like AirBnB or Uber started as small start-ups but became leading companies in their industries within a very short period of time – this rapid development was only possible through the development of technology that came with it. Todays markets change rapidly and new start-ups are formed every day, challenging well established companies and their business models. For Vermeend it is crucial, that companies are aware of the technological developments and adapt to changes in time before they are “eaten” by a competitor.

He admits that adapting to new developments and changes is easier for smaller businesses like start-ups, but he gives solutions for big companies with complex structures. Willem Vermeend advices that bigger firms create a subsidiary company, a completely independent daughter that is able to take up a new business model and engage in the new technologies. In Vermeend´s scenarios this subsidiary company can grow out to become bigger and bigger, finally eating up their mother company.

To sum up, better be “eaten” by a daughter company rather than by a competitor.

IoT is a strategic decision

TELE2 and KPN,  big telecommunication companies already engaage with the internet of things. Their speakers, Armijn Spreitzer, director of the KPN IOT and Rami Avidan, Commercial director M2M at TELE2 group gave information on the services their companies offer in relation to the internet of things. Their aim is to be part of the growing process of companies engaging with the new technologies, offering different services to them.

Tele2 for example launched an Internet of Things portal where they provide  for example help on incident reporting, contact management  and also other services.

KPN developed a new connectivity technology called LoRa, that allows low-data machine to machine (M2M) communication via a low-frequency connection. Companies can order trial packages in order to get to know about the new technology and this way start engaging with the internet of things.

KPN also is initiating partner of the Internet of things academy, an education programme that aims to create greater awareness among deciding managers in the Netherlands about the chances and challenges of the Internet of things. The academy also held a workshop at the congress where participants could learn in a playful way about how to solve everyday problems through technology. 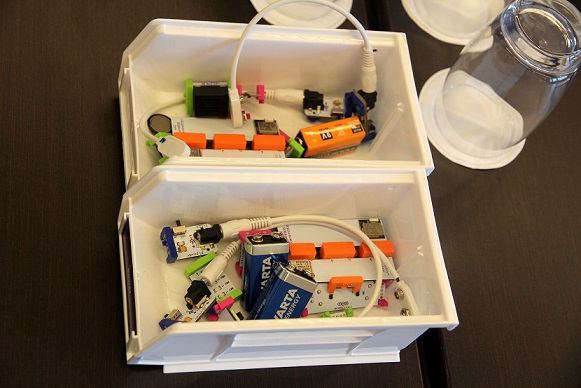 Building a wireless doorbell – Workshop at the Internet of Things congress

Though the overall optimistic tone, the panel discussion as well as speakers like Cees Links, founder & CEO at GreenPeak technologies and early visionary of the wireless internet also pointed towards the problems we are confronted with. During his speech he explained that we are just at the beginning of the technological innovations and that we can not yet comprehend the extent in which they will inflict with issues as security, safety or ethics. If a automated car for example is confronted with two obstacles – a tree and a child – how is it to decide which way to go? Kill the child and keep the persons in the car alive or the other way around?

Rob van Gijzel, major of Eindhoven identified these problems as an important task the Dutch government will be confronted with the coming years. He sees it as important that the government on the one hand embraces new technologies in order to become more effective but on the other hand also keeps a critical position on it.

In summary, it appears that the concept of internet of things still is relatively new to many businesses and people in the Netherlands and the challenges and chances are and can not yet be fully understood. It was however agreed that it is an important development that will bring with it fundamental changes. Though there still is a long way to go, the internet of things congress is one of the many new events to help bring people from different fields together in order to exchange knowledge, build new partnerships and enlarge their network. Thus one can already look forward to the next congress in 2016, this time taking place in Utrecht on the 6th of April.