Le Flâneur: let him take you on a journey through Amsterdam…

Le Flâneur is a mobile application that aims at improving users’ orientation skills by making them explore Amsterdam in a “smart way”. Making users learn the names of the streets and enable them to situate themselves without looking at wayfinding devices or achieve a “good verbal instruction” (Li et al., 2014) are the bottom line of the concept.

An approach to solve an academically researched problem…

Wayfinding technology such as Google Maps or Mappy is indeed considered by certain scholars as a “threat” to human spatial knowledge (Speake and Axon,2012) and physical landmarks building (Li et al., 2014). Physical landmarks in an unfamiliar environment are indeed built by the individual in a situation where there is a direct relationship between his/her current position and other locations (Montello, 2005), which is not the case with wayfinding devices. Speake and Axon (2014) also consider that Sat Nav harm our spatial autonomy as we rely to much on them, and therefore do not develop our spatial awareness.

This is the reason why we consider Le Flâneur to be undoubtedly intertwined with this academic debate. Our project aims at fighting this unquestionable reliance on Sat Nav and at stimulating users’ spatial cognition through an active engagement with their direct surroundings via the app.

Although this argument might sound contradictory-as users are still using Sat Nav to explore the city-we believe in a new form of “mediated unmediating” relationship to Amsterdam’s streets. Through playful features that foster users to actively participate in a “mediated but unmediating” visual experience, we aim at fighting fire with fire by somehow using technology to get rid of it. As an example, the goal of the “From A to B” feature (see below) is not to shorter the wayfinding time or fewer wayfinding errors the way Google Maps would do it, but rather an interactive and curious experience that might involve mistakes or take a longer time in order for the user to engage in a “get out and do mentality” (Speake and Axon, 2014).

Le Flâneur: a technological concept for a better unmediated experience

Le Flâneur aims at stimulating users’ spatial relationship to their surroundings through different features. One feature of the application is the “Podcast section”.The podcasts trigger automatically through a GPS system according to the location of the user. First, the user has access to the “Strolling Around” option where s/he can listen to the podcast that gives fun facts and information about the streets s/he walks or bikes on. 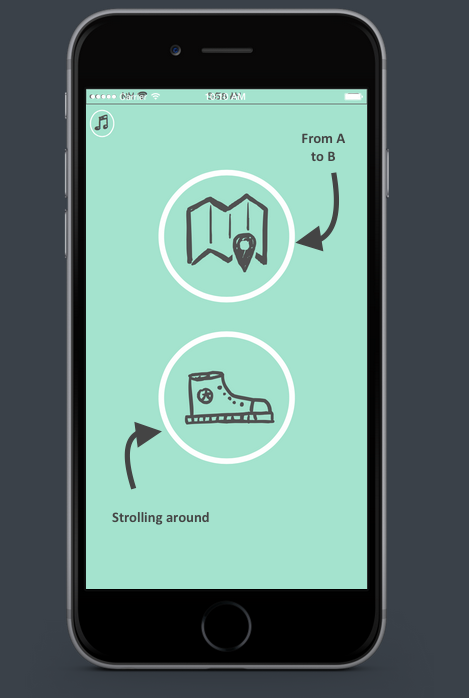 A second option of the “Podcast section” is “From A to B” which remembers the previous trips to get to the final destination and offers new alternative routes for a better experience of the city.

The second feature is called “Guess What” and is divided in three sections. First, the “Where are you?” option which invites the user to look around and find the name of the street s/he is on. S/he is then fostered to look up to street signs and type the names in the window that pops up on her/his screen.

Secondly, the feature “Where is the street on the map ?” consists in having a map of Amsterdam that pops up randomly and asks the user to point out where a certain street is situated in order to improve his/her awareness and physical map reading skills.

Lastly, the user can access to the section “Quizz” where s/he has to find out which description of the street in question is the accurate one. Once again, the goal here is to enable the users to look around and stimulate their physical landmarks building capacities. 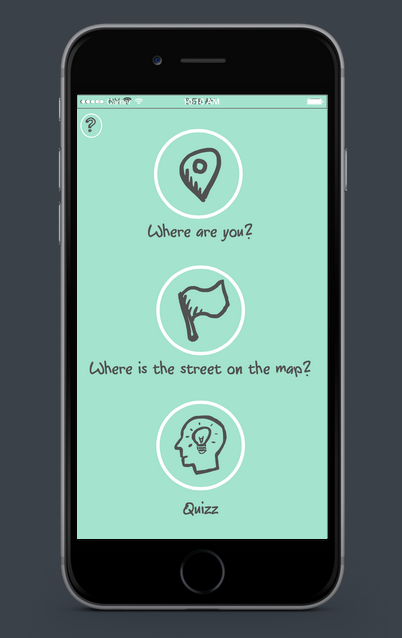 Eventually, users should be able to situate themselves without looking at wayfinding devices and become capable of achieving good verbal instructions (e.g.: show up to the right place where s/he has a meeting.) The interactivity of the application is aiming at involving the user as an active participant of her/his spatial cognition and experience of Amsterdam.

Why “Le Flâneur”? Referring to the character of the 19th century’s French writer Baudelaire that strolls around and enjoys the beauty of the city, “our” Flâneur takes the user to charming areas of Amsterdam and makes him learn the names of its streets.

We first detailed the documentation of the whole process on a Tumblr dedicated to the project. The experience of designing such an object was quite unique for us as we have never had to think about the arcana of a mobile app realization. The whole process was challenging in terms of logics and feasibility. The features of the app were the most demanding part: what form of features could involve the user in an immersive experience of Amsterdam? What format is actually more suitable for learning, especially in a playful manner? How can the functionalities of the app make sense and what are their limits?

Submitting our project proposal to a feedback permitted to sharpen Le Flâneur’s structure and core objectives and allowed us to target the inaccuracies of the concept. In order to make sure the functionalities of the app would be realizable, we consulted a web designer through an event organized by the website MeetUp.com; he eventually confirmed the feasibility of Le Flâneur. After creating a mockup of the application and recording an example designed for the “Podcast feature”, our project became quite rewarding as it was slowly taking shape.

It seems important to mention that the project will remain as an unrealized proposition, as we are not able to program a mobile application, nor do we intend to for the moment. Nevertheless, its presentation to the rest of the class confirmed that people would be interested in using such an application, as the problem posed by wayfinding devices to orientation capacities seemed to be experienced by a lot of our fellow students.

Speake and Axon. 2012. “‘I Never Use ‘Maps’ Anymore’: Engaging with Sat Nav Technologies and the Implications for Cartographic Literacy and Spatial Awareness.” The Cartographic Journal.