FeelReal: The social media app where reality is more important than fakeness


Nowadays, you can’t make a friend without having them connected to you on Whatsapp, Facebook, or Instagram. The social media hype is only understandable given the fact that your connection with these new friends is taken to another social level, plus the added bonus of following your favourite public figure; keeping up with Kim Kardashian’s selfies can be one way to enjoy it! However, the standards set by many popular social media users have influenced all other users (especially youths) both positively and negatively; it has a power over self-esteem and idea of body image as it continuously forces users compare their lives to the glamour and beauty that is social media fame.

The power of media
According to Foucault (1982), power is ‘an everyday, socialized phenomenon’ (Bonanno 2014, 1). He believes that the subject is produced by the structures around it (Foucault 1982, 777). Furthermore, Derrida elaborates on the idea of media agencies and ‘teletechnologies’ controlling the subject’s ‘performance’ (Derrida, Stiegler and Bajorek 2002, 42 & 122). In this case, the subject are the users of social media platforms and the platforms are the structures that mould them. 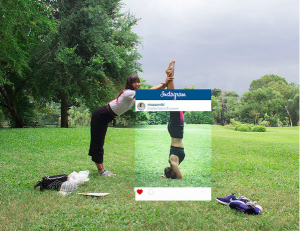 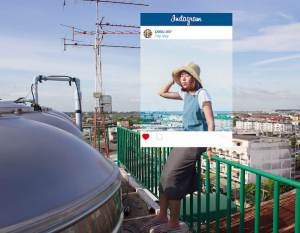 Nevertheless, it is the perfect tool for keeping up with family, friends and the world. The aim of this project is to create a social media platform which is free from performativity and shows reality. We want to come up with a solution to try and shield users from the effects of social media instead of advising them to quit it, which wouldn’t be suitable for a modern society. Users should show their friends what’s going on while keeping it real. Thus, no filters, no advertisement and no “fauxthenticity” (fake authenticity).

Social media effects
More research is being done on the effects it has on its users; however, studies have come to different conclusions. Firstly, research has shown that Facebook use has a positive effect on users since it can lead to the ego-fulfilment needs (Toma and Hancock 2013), greater subjective well-being (Kim and Lee 2011) and higher relationship quality for those in a romantic relationship (Steers, Overup, Brunson and Acitelli 2014).

Negatively, however, there is a connection between the amount of time spent on social media and psychological behaviour (Moreno et al. 2011; Morrison & Gore 2010; Steers, Wickham and Acitelli 2014). A reason for this effect has to do with the way users perceive other users online. People who posses a Facebook account over a longer period of time or who spent more hours per week on Facebook believe that other users have better lives than they have (Chou and Edge 2012; Jordan et al. 2011). People who perceive themselves as ‘lower’ compared to others have more negative health outcomes such as depressive symptoms, lower self-esteem and negative self-evaluations (Allan and Gilbert 1995).

FealReal
Since the aim of this project is to shield users from the negative effects of social media – to distinguish ‘fake’ from ‘real’ – we have invested the social media platform which shows reality: “FeelReal” (FR). FR will distinguish itself from general social media platform. First of all, the platform is a private space, free from advertisement,  where close friends can be comfortable to share their reality. FR-users get pop-ups everyday at a random moment when their mobile phones are active. The user can choose how many times a day the popup will appear but cannot choose the moment. When the mobile phone is in use, it forces the user to take a picture in that precise moment in time. The user gets 30 seconds, if the picture is not taken, an image with “FauxDay” will appear on his timeline. Other users can add friends to follow them and review the pictures. Finally, this will result in a timeline with what is really happening (or not happening). 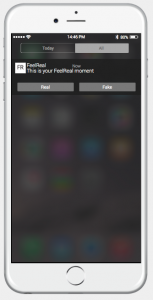 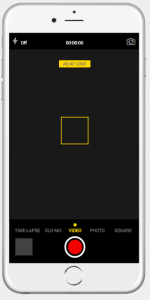 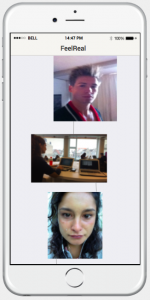 A preview of the interface of the FeelReal app

To ensure the realness of FR it will not be possible to make use of filters; it will make use of alternating camera-use, which means that the user one day is forced to take the picture front face (also known as ‘selfie’) and the other day back face (picture of what the user is doing at that random moment); and will it not give other opportunities, except for creating a timeline about the real. By developing FeelReal, we are aiming to stop the distorted and misleading image of the ‘fake’ and we hope to challenge people to show the ‘real’. By following people on FeelReal, one is able to check-out the realness of someone. When a FR-user has chosen to not use his mobile phone, we recommend to stop the connection. Without any connection an image will appear on the timeline with “In Real Time”.

Future expectations
Research has shown that negative body image and negative social behaviour are examples of negative social media effects. Our new application is aiming for positive impacts, where users of the platform can be a part of the social media environment and won’t have to feel excluded of this ‘social media’ world. Research also has shown that users can feel intimidated by seeing perfection, and jealous from these lifestyles (Allan and Gilbert 1995; Chou and Edge 2012; Jordan et al. 2011). Therefore our new app will gain users who are also willing to deconstruct social media’s current image of reality and therefore present a positive society. Where the lifestyle and the presence of online users are comparable with real persons (instead of a fake representation of people). This application is aiming for a promotion of a genuine reality for a better society where all negative impacts can be turned into positive impacts.

Chou, Hui-Tzu Grace, and Nicholas Edge. “ “They are happier and having better lives than I am”: the impact of using Facebook on perceptions of others’ lives.” Cyberpsychology, Behavior, and Social Networking. 15.2 (2012): 117-121.

Kim, Junghyun, and Jong-Eun Roselyn Lee. “The Facebook paths to happiness: Effects of the number of Facebook friends and self-presentation on subjective well-being.” CyberPsychology, behavior, and social networking. 14.6 (2011): 359-364.

Morrison, Catriona M., and Helen Gore. “The relationship between excessive Internet use and depression: a questionnaire-based study of 1,319 young people and adults.” Psychopathology. 43.2 (2010): 121-126.

One Response to “FeelReal: The social media app where reality is more important than fakeness”
Leave a Reply