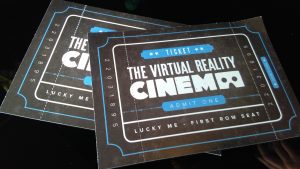 Tickets for The Virtual Reality Cinema

The VR Cinema is the latest attraction to claim a space in Amsterdam’s entertainment landscape. It is the first of its kind in the world, and offers an experience reminiscent of the first movie houses. Unfortunately, that means offering brief, gimmicky encounters that only hint at what the medium can become. You can choose from four packages for your experience: Scary, Documentary, Funny/Kids, or Journey. Inside of each packages are short films that are connected by theme, but vary in style, quality, and immersive power.

2016 has been a big year for reality morphing technology with augmented reality (AR) and virtual reality (VR) carving out niches in the consumer market. The hit augmented reality app Pokémon Go allowed millions of smartphone users to live out their childhood dream of being Pokémon masters. While virtual reality enthusiast have finally been able to get their hands on consumer versions headsets, like the long awaited Oculus Rift. Both AR and VR move our perception of reality away from what’s real towards the virtual. Augmented reality does this by imposing computer generated images over real objects or environments. Examples range from dedicated Google Glass platform to the filters found in Instagram. Virtual reality on the other hand, seeks to fully immerse viewers in a virtual environment, and thus requires more complex human-computer-interface technology. The ideal VR technology that would allow us to “go anywhere and do anything” (Bates 2) does not exist yet, but has been imagined in the Star Trek Holodeck.

Needless to say, more people have gotten to experience AR than VR thanks to its low price (€0, if you already own a smartphone), and the social aspect of capturing virtual monsters with friends. In contrast, VR can potentially set you back €1,500, and is inherently isolating thanks to the vision blocking headsets. If technological change is inseparable from broader social changes (Agre, 747), then the situation VR currently finds itself in could signal a society’s push towards elitism and isolation. 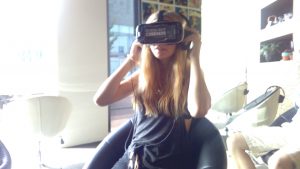 Enter The VR Cinema with its attempt to make virtual reality affordable and social. It is regrettable that what it offers are actually only 360-degree 3D videos; not full VR scenarios with free movement and interactivity. This is just a taste of what Hollywood similarly plans for VR.

When cinema was new its films were short and simple. Like most new technologies the first experiments with the medium were meant to show off the capabilities it afforded, capturing m oving images of things that really happened. The success of early gimmicks came from the audience’s lack of understanding of how film worked. A one-minute film of a train pulling into a station (L’Arrivée d’un train en gare de La Ciotat), was enough to send viewers screaming in panic. As Shapiro and McDonald describe it, “the new medium was unfamiliar, so they were relatively insensitive in their ability to distinguish real from unreal”(107). The worldview of those early viewers did not allow for anything other than the image of a moving train meaning a train was coming. How exciting it must have been to have a grainy, silent, moving image so easily warp your perception of reality.

Virtual reality is not as new now, as films were then. It has been promised as just a few years away for decades. In that time videogames and 3D movies, along with teasing AR and VR experiences have inoculated us against the reality warping effect of VR’s full arrival. VR still has the potential to immerse its audience, but it’s going to take effort. 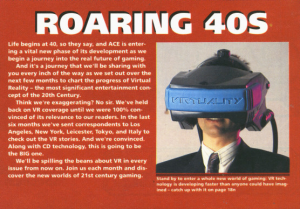 The VR Cinema puts effort in its presentation, but not execution of virtual reality. The building is nice, the equipment is new, and it has a chic lobby/bar area; which is the only place for any social interaction, because everyone is free to pick their own package once their headset is on. A majority of the films sampled from the Scary and Documentary packages are not captivating. The films selling point for most is that they are in VR, but this is VR were all you can do is look. Even looking isn’t always encouraged though. Looking in the wrong direction could mean missing what’s supposed to be seen. The alternative is to stay still once a scene starts, but that makes the VR situation no better than being in a movie theater. It was theorized that the lack of control and perspective in VR would create a dull experience (Bates 6). That is here confirmed. The most immersive films were those where the viewer is simply floating through environments. In those films there’s less of an urge to do anything other than look.

Virtual Reality has the potential to bring back the sense of wonder that’s been harder and harder to capture. However, it won’t get there imitating older media forms. New forms of media push the audience to develop new skills and sophistication (Shapiro and Mc Donald 110). The VR Cinema instead makes the new feel old, by not embracing all that virtual reality is capable of. It should do away with pretense to be more aptly named The 360 Cinema, and similar endeavors should follow suite.

Shapiro, Michael A., and Daniel G. McDonald. “I’m not a real doctor, but I play one in virtual reality: implications of virtual reality for judgments about reality.” Journal of Communication 42.4 (1992): 94-114.