LoveBot chatting on behalf of human: Are we surrendering our social life to technology? 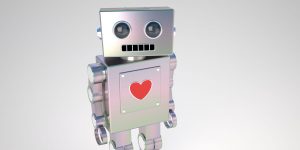 At the 2016 TechCrunch Disrupt SF Hackathon, Guru Ranganathan presented the concept of an app called LoveBot, that “tells your wife you love her so you don’t have to”. The app uses Telegram App SDK and automatically sends messages to designated contacts at designated frequency, telling them how much you love and appreciate them or asking them how their day is going. It is, as the developers claimed, “the thoughtful husband or wife that you aren’t”. (TechCrunch)

LoveBot provides three different types of messages. By selecting from Love, Casual or Motivational modes, you can configure the app to either send sweet romantic whispers to your loved ones, check in on your friends asking about their lives, or send inspiring quotes to cheer someone up. The developers Guru Ranganathan and Karthikeyan Santana suggested that the app had potential beyond expressing love. With access to users’ contacts or Facebook friend list, it could also help checking in on old friends and rekindle friendships. (TechCrunch)

Human interacting with chatbots in text form or natural language is not something new. A chatbot is a service powered by rules and sometimes artificial intelligence, that you interact with via a chat interface. (Chatbot Magazine) It can be either a standalone app or included in major chat products (Facebook Messenger, Slack, Telegram, Text Messages, etc.). The types and functions vary from simple ones only responding to very specific commands, like the Weather bot that shows the weather forecast as users ask, to more comprehensive ones using machine learning or artificial intelligence which can understand more complex natural language and get smarter through learning from conversations. (e.g. Apple’s Siri and Microsoft’s Cortana)

However, it is one thing to have chatbots serving as personal assistants, help organizing information and functions, or working as a supplement to interpersonal communication, it is another to let them take over the place in interpersonal and even intimate relationships. Microsoft’s efforts in building the Chinese chatbot Xiaoice to be ‘a bot that’s your friend’ may be one step towards making chatbot a human-like accompany, but the idea of LoveBot to chat on behalf of human has pushed its ambition to a whole new level.

Worries about giving such tasks to a chatbot are not rare. The Next Web’s report on LoveBot  expressed concerns over whether technology is destroying our capacity for intimacy. (The Next Web) And Althea Chang called this app “the death of romance”, pointing out the question that “Isn’t romance about caring enough to think about someone else on your own?” (Tom’s Guide)

The significant role of communication technology in human interpersonal relationship has a long history, from the early days of telegraph and landlines to the more recent widespread use of cell-phones, from the first social networks to all kinds of instant messaging applications nowadays, each step of the technological development has brought some changes to our habits in interpersonal communication. By facilitating information exchange and making communication ever more convenient, the technologies we use every day are also shaping and molding our actions in a certain way. As stated by Stanfill, the media has a productive power towards our actions by making some behavior easier than others. Given the shaping power in what technology says yes to (Stanfill) , it is not surprising that ambition of communication technologies is going from facilitating and complementing human interactions to invading it. After all, “why would you want to be chatting to the bot when the bot can be chatting for you.” (Guru Ranganathan)

But is LoveBot really the solution to make up for the shortcomings of not being thoughtful or expressive enough? Or can it really make it easier for people to reach out and express caring to friends and families?

The famous myth of Theuth captured the fundamental duality in media innovation: to the extent that each new medium operates by exteriorizing some function of human cognition and memory, it involves both gain and loss. It is argued in the story by the ancient Egyptian king that once people mastered writing, they will cease to exercise memory because they rely on that which is written, calling things to remembrance no longer from within themselves, but by means of external marks. (Hanson) The use of technology as supplement or even substitution of human interpersonal communication has the similar effect – apart from making it more convenient for people to send greetings, it also making it harder for people to really communicate in depth and build strong emotional connections. Since we got used to the texting and messaging functions of our cell-phones, it is harder for us to really pick up the phone and talk to our friends when we’re thinking of them.

Ranganathan said in his Hackathon presentation that “Sending the first message in a conversation is always the hardest.” Truth as it is, the answer is not in simply leaving it to a chatbot. In order to build real connection with your cared ones, the risky first step in initiating interaction has to be taken anyway.