Fitness tracking with TomTom: an attempt to regain market control


TomTom used to be one of the most important players in the field of navigational systems. With the arrival of google maps and other “free” navigators, TomTom was no longer the number one navigational device. TomTom was founded in 1991 as a company that focused on handheld computer devices including route planning software, from the early 2000’s they focused on navigational devices and established a name in this field. In the years to come the company released other route planning hardware and software and in 2013 they launched the GPS Sports Watches.

There are different ways TomTom has tried to remain its position in the commercial field. Like last year when TomTom released a navigational app wherein the first 75 kilometres are free, after these kilometres are used, users have to pay. During this year’s IFA in Berlin they presented seven new items, differing between hardware and software (Morrison). Besides producing navigational software and hardware, TomTom is now also focusing on sporting apps and devices. While most new items that were presented at the IFA considered an update for already existing items, two items were completely new: TomTom TOUCH and TomTom VIO. The former is a fitness tracker and the latter is a navigational device especially designed for scooters. The navigational scooter device seems to be right up their alley, but fitness tracking appears to be something new for the company. While they already have sporting devices, the TOUCH goes a step further. 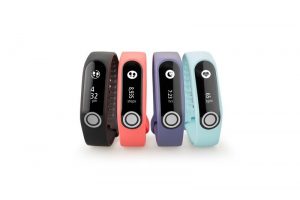 TomTom TOUCH is a fitness tracking bracelet that can be bought for 149 euros and can be linked to smartphones via an app. It is available in different colours and sizes, and TomTom emphasizes its comfortability and how easy it is to wear. As it is introduced as a new item, what makes it new and interesting for costumers to actually buy? Apparently TomTom saw great potential in fitness tracking, maybe because health and sporting apps are popular at the moment. This products bears a strikingly resemblance tothe fitness tracking devices of FitBit, with them being trackers in bracelet form that can be bought for around 150 euros and that users wear 24/7 (Mackinlay 1). Besides being similar to FitBit, nowadays most smartphones are already equipped with fitness trackers (like S Health for Samsung and Health for Apple), or comparable apps can be downloaded for free from the app store. Reasons for customers to buy a TomTom TOUCH instead of downloading one of the free apps could be: the bracelet is easy to wear 24/7, and perhaps it does not collect personal information about their users like free apps do. That something is easy to wear 24/7 is no longer very necessary, with most people having their smartphone with them all the time. The second argument is better. The users of the free apps do not have to pay any money, but they “pay” with their personal information. Google’s own fitness tracking app Google Fit, MapMyFITNESS, and Fitness Tracker are examples of fitness trackers that can be found in the Google Play Store. The pre-installed and the downloadable apps all collect some information (see images below) about theirusers, of some of this information it is not clear why this would be necessary a fitness tracking application. Users hand over more (personal) data just to use a free app. TomTom could distinguish itself by doing less of the personal tracking from its users, because users have already paid 149 euros for the bracelet. However, buying the bracelet is not enough. Users have to download an extensional app: TomTom MySports. Unfortunately this does not differ from the other apps in the amount of personal data it collects from its user. 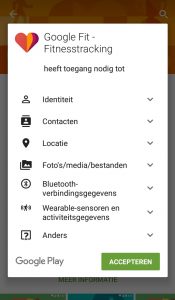 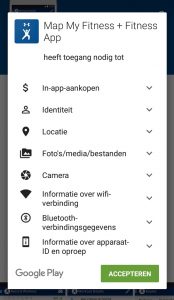 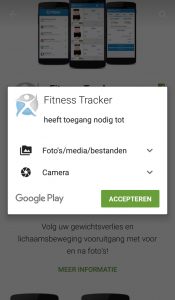 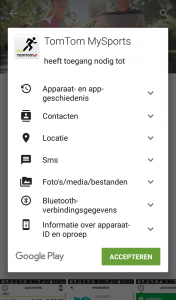 Tracking has become something that is taken for granted, because with so many people having a smartphone with them every hour of the day it has become easier than ever (Miller 24). People are used to carrying around their little computers, so if these devices can also track your fitness why buy an extra device? Fitness tracking is part of self-tracking, which people have increasingly been doing online the past couple of years (Lupton 3). Smartphones have become todays diaries, with the difference that there is a larger audience than just the self-tracker. With the rise of self-tracking there has also been a rise in the awareness of where one’s personal data is stored. Do people really want to share all this information with so many? On the other hand tracking has become very easy and a convenient way to store ones information. Different forms of tracking like goal driven or documentary tracking have become part of daily life (Rooksby 1136). While it still feels like a desperate survival attempt, perhaps TomTom’s newest device can be part of people’s tracking lifestyle.

Mackinlay, Molly Zellweger. “Phases of Accuracy Diagnosis:(In) visibility of System Status in the Fitbit.” Intersect: The Stanford Journal of Science, Technology and Society 6.2 (2013).